So she wrote her own one-woman show. About the debilitating disease that's put in her a wheelchair. 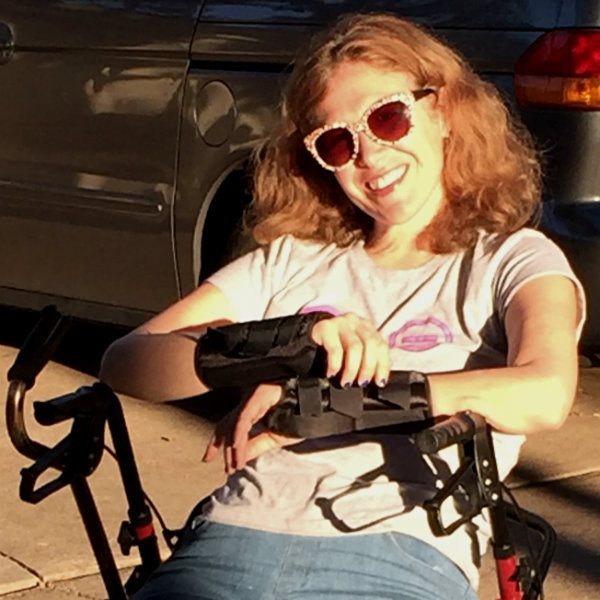 Sherry Jo Ward has appeared in films, TV and on stage - from Actors Theatre of Louisville to WaterTower Theatre. But Ward's toughest role may now be playing herself - in 'Stiff,' her solo show about the rare neuromuscular disease that leaves her rigid and in pain. Ward can't drive. She can't get around without a wheelchair or a walker. And she's raising two kids with her husband, actor-playwright Tom Ward. But she still can act. This month, Ward is in two shows: 'Stiff' and the appropriately named comedy, 'Life Sucks,' both at Stage West.

Actor Sherry Jo Ward is playing her toughest role this month — in her own one-woman play. Ward wrote ‘Stiff,’ her first professional play and it premiered earlier this year at a Dallas festival and won critics’ awards. Now it’s being staged in Fort Worth. ‘Stiff’ gives Ward her toughest role because she plays herself – suffering from an extremely rare disorder that leaves her in constant pain, her muscles rigid or trembling.

No kidding, that’s what it’s called. Sherry Jo Ward found that pretty funny. Two years ago, Ward visited her third neurologist. This was after months of mysterious tremors, severe pains, even her legs giving out, causing her to collapse. The neurologist said Ward might have Stiff Man Syndrome, and a blood test could detect the antibody involved with Stiff Man Syndrome.

‘Stiff’ plays the next three Tuesdays at Stage West through Oct. 31. ‘Life Sucks’ is there through Nov. 12.

“So I got a call a couple of days later,” she says in ‘Stiff.’ “I tested positive for Stiff Person Syndrome. They had changed the name. I’m telling ya, feminists are on top of everything.”

Her wisecrack gets a laugh. So does a lot of what Ward says in ‘Stiff’ — often honest comments about herself, her feelings, other people’s reactions to her condition. At one point, she says of her husband Thomas: “Whenever he starts to worry about the future, I try to comfort him — by reminding him that there’s still a good chance that he could die first.”

Setting out to write ‘Stiff,’ “I was like, ‘I’m only going to make this a show if I can make it a comedy,” Ward recalls. “I’m not going to ask people to sit and listen to me whine unless I have something to give back to them.”

Sherry Jo Ward and the short bus in ‘Stiff.’

‘Stiff’ follows Ward’s struggles to cope with the neuromuscular disorder. She’s housebound most days. She’s on disability. She can’t drive. She uses a walker or wheelchair to get around. She can’t even hold herself upright for 20 seconds.

Yet the 44-year-old Ward continues to act on stage. The next three weeks, she performs the hour-long ‘Stiff’ on Tuesday nights at Stage West while also appearing there in playwright Aaron Posner’s appropriately named comedy, ‘Life Sucks.’

And Ward is doing all this while raising her and Thomas’ two sons, Christopher (12 years old) and Adam (8).

“Whenever I’m having a bad day,” Ward declares in ‘Stiff,’ “someone will always remind me how much the kids need me. “Remember how much your boys need you!” – so that’s always helpful. You know, it’s always easy for moms to forget how much their kids needs them.”

‘Stiff’ is indeed a comedy but much of its dramatic effect comes from Ward simply performing it herself … just sitting there. Her hands tremble, her legs twist or go rigid. She talks about the strains her disability has put on her 20-year marriage to Thomas — and she doesn’t need to elaborate much. Her shaking presence is testimonial enough.

Ward’s an actor, of course, and this is a performance. “But as far as just the muscle fatigue,” Thomas says, “and the pain and the strain on her? She’s not putting that on, especially by the end.”

Thomas is also an actor-playwright — currently starring in Theatre Three’s production of the musical, ‘The Adding Machine.’ The two met in the theater program at Abilene Christian University. They worked in theaters in Louisville, Alabama and Minneapolis before moving back to Texas in 2006. Sherry’s performed in ‘August Osage County’ at WaterTower Theatre, in David Mamet’s political satire ‘November’ at Stage West. She and Thomas even acted together in his comedy, ‘International Falls.’

But the past two years — not so much stage work. Discrimination against her disability is not the culprit, she insists. Ward says she’s simply wary of auditioning for many shows. She wouldn’t have the stamina for 10-or-12 hour rehearsals. So she has to choose projects carefully — and Stage West, she says, has been particularly accommodating to her limited mobility.

These days, the Wards live with Thomas’ mother Pat in Fort Worth. Which, Thomas says, is one of the things they’ve had to learn about Sherry’s condition: They can’t handle it on their own.

“I don’t like needing people,” he says. “And Sherry’s the same way. And not only do we need each other, we’ve come to accept we need my mother. We need our friends. And not just emotionally but also just practically.” With two kids, he’s acting in Dallas, while she’s acting in Fort Worth: The back-and-forthing to school or along I-30 could get maddening — even without a severe disability.

And Stiff Person Syndrome is a degenerative disorder. Ward’s symptoms are only getting worse. “I was surprised how fast this was,” Sherry says. “I wish I’d known.” There’s no known cause, no known cure. That’s partly because SPS is incredibly rare. It’s literally a one-in-a-million disease. In the U. S., only about 330 people have it. But there may be more, no one knows: It’s often misdiagnosed as Parkinson’s or multiple sclerosis.

So no major foundations are supporting research into SPS. Besides, it doesn’t actually kill people – though its complications certainly can. Like, just falling down.

“Because your reflexes don’t work,” Sherry says, “when you fall down, the injury is often severe.” You hit the ground like a sack of bricks.

Sherry Jo Ward and her husband Thomas Ward in his comedy, ‘International Falls’ at Stage West.

Doctors can treat the symptoms, even as those symptoms worsen. Ward sees a physical therapist and takes painkillers and relaxers, including cannabis. (She doesn’t actually vape cannabis onstage — that would be illegal — but it’s an enjoyably theatrical gesture.) But all the medications mean she has to calibrate her dosage carefully before any performance – to balance a clear head against agonizing muscles.

“There’s no secret that I’m taking heavy medication,” she says, “and this is what it does. You start having to make choices between sleeping all the time – or do you choose pain?”

Ward’s script even includes a safe word – to alert her stage helper she’s forgotten her lines. Or needs help getting up.

“I can see her really trying to seize every day,” Thomas says. “And if she has energy, she uses it. She doesn’t waste it. And there’s something really inspiring about that. She’s not saying ‘no’ to a lot right now. And it takes a toll. She pays a price.”

Ward says she wrote ‘Stiff’ as an outlet, a way to explain what’s been happening to her, a channel for what energy she still has. She needs to get out of the house, she wants to act.

Besides, as she says, she may be stiff. But she’s not ready to retire.

How does Stiff Person Syndrome affect you these days? What’s it actually like?

I have hard spots. Right now, I have rock-hard spots that are really sensitive. Like, hyper-sensitive. My reflexes are bad. My muscle control is bad. This leg in particular just goes straight out sometimes. I mean, it literally goes stiff like a mannequin. And I don’t know when that’s going to happen. Muscle spasms. I get a spasm in this foot. My muscles are not reliable. I can’t predict it, and there’s no muscle that’s off-limits. That’s why I can’t drive. There’s something called the startle reflex. If someone were to honk a horn, my leg could just go out of control.

Your degree is in theater management, and you’ve worked for such companies as the Dallas Children’s Theatre. With this disorder, are you still able to do any of that kind of work?

I still work from home a little bit. I still do some freelance writing, commercial types of writing, press releases. That kind of thing. But for most of the day, I’m stretched out. I save my energy for when my boys get home.

You’ve written ‘Stiff.’ You premiered it at the Festival of Independent Theaters earlier this year, it earned raves from the DFW Theater Critics Forum, and now you’re performing it in Fort Worth. So what do you hope to do with it?

Now I’m kind of like, where do I put that energy? So, I’m putting that energy into where else can I perform it. I’m trying to take it around. I purposefully wrote it to be easy to travel with.

What I would love to do, though, is get this in front of doctors, get this in front of not just neurologists but doctors and specialists who see people for five minutes every few weeks, and try to give them as much of an idea as I can about what they need to talk about [in those sessions].

With a disease like this that’s progressive, we’re not battling it, we’re not trying to fight it because it’s not going anywhere. So much of that time is spent on just how do we adjust your medication to get you through the day? It’s about survival. It’s about quality of life, even though it’s not a terminal illness.

It’s like, I want to get it in front of doctors who see you for those five minutes to kind of show them what the rest of your life is like.