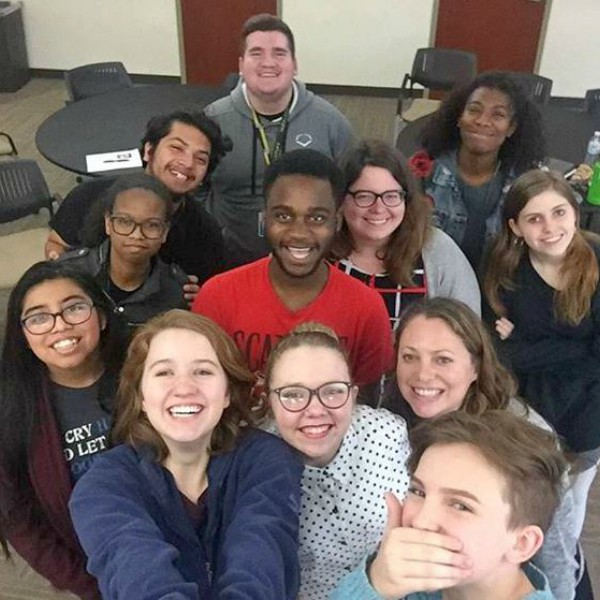 Art&Seek has been following this group of teen actors since January as they work to develop their next play, 'Babel.' It's a drama about guns and gun violence. The troupe, led by artistic director Mara Richards Bim, is crafting the show using techniques from ‘devised theater’ or ‘documentary theater.’

A group of teen actors from Dallas are among the NRA’s newest members. Now, they’re heading to the convention. The group’s called Cry Havoc Theater Company and the Art&Seek team has been following them as they research gun violence for a new play. In this week’s Spotlight, the teens share how guns have touched their lives:

It’s about 9 a.m on Saturday morning and the cast of Cry Havoc’s upcoming show have gathered at the Meadows Conference Center in Central Dallas. Mara Richards Bim – the founder and Artistic Director of Cry Havoc – is going over logistics for the group’s trip the NRA convention.

“Okay! So a few things, you should all have now received from me your ‘Welcome’ email to the NRA,” Richards Bim says to the group. Some of the actors are eating donuts, a few are drinking coffee and others are taking notes on a notepads. Richards Bim continues breaking things down for the kids and tells them that they’ll be getting membership cards and baseball caps that spell out ‘N-R-A.’

The actors laugh, but the smiles fade and minds focus as Richards Bim continues.

“So we will come up with a script for you.” says Richards Bim. And then she begins to demonstrate how she wants the actors to introduce themselves to NRA members: “Hi! My name is Cara Lawson. I’m a senior in High School. I’m part of Cry Havoc Theater. We’re creating a show about guns. Would you be willing to answer a few questions?”

After the demonstration, the actors wonder what they should ask NRA members and Richards Bim says they’re going to be given a set of questions.

This trip is a big deal, because Cry Havoc’s next play is about the gun debate. The script will be written from interviews the teens conduct. So far, it’s been hard to get gun advocates to speak with them.

“All I’ve heard about the NRA right now,is how horrible they are,” says Jamaya Parker. She’s a sophomore at Booker T Washington High School. “But I’ve also been getting this feeling that NRA is different entirely from the members of the NRA.”

Parker’s pretty neutral about guns – her parents own them. But she – like many teens – wants an end to gun violence.

“Do we all have to be on the ground bleeding to death from a bullet before we’d be like, ‘Okay?’” she asks. “Cause I know if I had a gun and all these people were dying, I’d be like, ‘Do what you have to do.’”

Trinity Gordon outside of school.

Trinity Gordon’s a senior at Skyline High School. She’s on debate team and often plays devil’s advocate with the cast. Gordon’s pumped about going to the convention. Says she’s going to buy a camouflage shirt.

Gordon’s not alone. Most of the actors are stoked. They’ve interviewed dozens of people since January – politicians, felons, police officers, even a trauma surgeon. They’ve met families of murder victims. They traveled to Washington DC, and Sandy Hook Elementary School – and here in Dallas, to a gun range, to shoot automatic weapons.

These teenage documentarians strive to be impartial. But they carry their own experiences. One actor’s friend killed herself with a gun. Another knows a family whose toddler died playing with a gun.

When Fabian Rodriguez was three, his father was shot in the head and killed. The senior at Seagoville High School says classmates have been killed too.

“It happens a lot,” Rodriguez says. “And I guess adults, they don’t really hear those stories. They hear the mass shootings, but they don’t hear the ones that – the little shootings – that still have a big impact on everybody.”

Again Trinity Gordon: “Recently a classmate of ours died, because he was shot watching someone play dice. So it’s just things that happen.”

Her classmate was killed in an apartment complex across the street from Skyline High School in April.

Sheldrick Pearl is also a senior at Skyline. He says he’s become numb to the shootings in his Pleasant Grove neighborhood.

“You know you just have to accept the fact that maybe one day that might be the day that you get shot,” Pearl says. “I mean,you try not to think in such negative ways, but it’s out there. It’s going to happen. You just pray that it’s not you or someone you know and love.”

The next 72 hours are going to be wild. The President’s coming. Protesters and counter-protesters have rallies planned. And the national media is swarming in.

But inside the convention center will be a group of kids simply looking for answers.