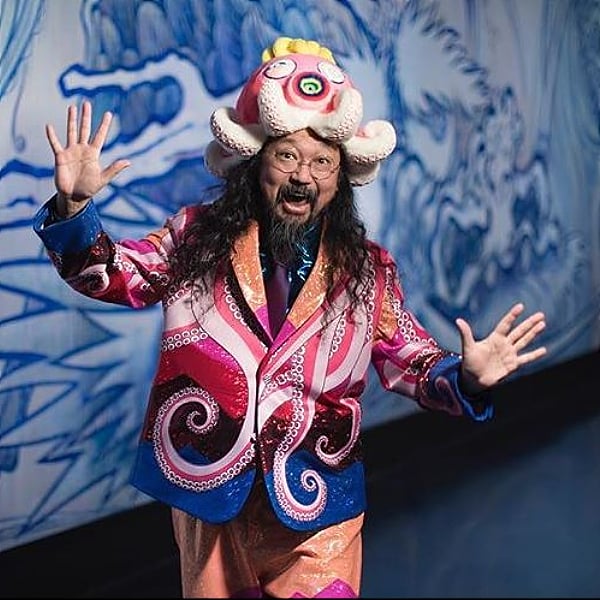 The Japanese artist Takashi Murakami has been making artwork for more than three decades. He's well-known for vibrant anime-inspired pieces, collaborations with music icons Kanye West and Pharrell Williams and for designing a line of handbags produced by fashion house Louis Vuitton. Murakami is also celebrated as an artist who isn't afraid to blur the lines between ancient and modern cultures.

“Takashi Murakami: The Octopus Eats Its Own Leg” is on view at The Modern until September 16, 2018.

Japanese artist Takashi Murakami is known for painting vibrantly colored characters that seem to be from a universe where anime and manga merge with ancient mythologies. A retrospective of his work just opened at the Modern Art Museum of Fort Worth and it’s expected to be a blockbuster. In this week’s Spotlight, Art&Seek gets some insights into the artist and the evolution of his work from the exhibition’s curator, Michael Darling. Darling is a curator at Museum of Contemporary Art, Chicago, where the show originated.

The text from this interview can be heard in the player below. Hit the ‘Play’ button to hear a longer version of Art&Seek’s interview Michael Darling, curator at Chicago’s Museum of Contemporary Art, about Takashi Murakami.

Michael Darling thank you so much for taking some time to chat with me.

Thank you; happy to be here.

Before we talk too much about the exhibition let’s talk about Takashi Murakami. Who is he and what should people know about the man often referred to as Japan’s Warhol?

One thing that I know about him is that he’s an incredibly serious artist. He knows art history. He wants to make a contribution to art history. And he wants his work to be known 300 years from now. That ambition and drive and intelligence is in the work but, often times, people see the bells and whistles and the colors and the smiley faces, so they they can’t see his intention. So, I really tried to make an exhibition that shows this really dedicated, serious, committed side of this artist.

Most people who will encounter Murakami’s work they might think of Hello Kitty or Kero Kero Keroppi but his artwork is much deeper than that. Can you talk about some of the themes that he integrates into the artwork that may not be easily accessible?

Takashi Murakami tells Art&Seek how natural disasters and the bombing of Hiroshima shaped the narratives in his artwork.

We included some of his earliest mature paintings when he was working in this style called Nihonga – he actually has a Ph.D. in this particular type of traditional Japanese modern painting – and in those early pictures there are images of animals like turtles and fish and things, but often in the background, there are images of nuclear power plants and things like that. So, ideas about nuclear destruction both from power plants in a more modern sense, but even the bombing of Hiroshima and Nagasaki. The history of Japan as a defeated nation and the psychological trauma of that is all through the work. And even more recently the big tsunami and earthquake in 2011 deeply affected him and really changed the course of his work in a lot of ways. And so there’s a sadness and a kind of deep historical quality to the work that I think comes through and that people don’t necessarily see.

Can you talk a little bit about how the artwork has changed over that period? Visually how might they be different for someone who’s not accustomed to seeing a sort of different sort of Murakami?

In recent years, Murakami has begun making works that are reminiscent of 17th century Japanese paintings. He tells Art&Seek that it wasn’t disasters that inspired him, but a collaboration with Nobuo Tsuji.

No, I think that’s another thing that luckily plays out very clearly in the show. The very earliest paintings are quite simple. There are even some small canvases where he was painting them just by hand, by himself. Little and very simple images of Mr.Dob on single-color backgrounds. And you can see as time goes on that his ambition starts to make the paintings more ambitious in size, in complexity, in how the paint is actually applied in canvas to the point where right now he employs hundreds of people in his studio working in New York and in Tokyo that are working around the clock.

Modern Art Museum of Fort Worth

And it’s about making these painting that are gigantic and totally overwhelming and consuming. And the detail and the craftsmanship is like nothing else that’s being made out there today. And you can only really make these with these teams of people that are laboring on their hands and knees to kind of craft these incredible, you know, really jewel-like paintings. You might see them on a digital image or something and not get even an itoa of the detail that’s in these things so, to see them here in person and get right up close to them is pretty incredible.

He makes a lot of merchandise right? There’s shirts, there’s plush dolls there’s mouse pads even. Why you think he’s so popular in the western world.

Murakami tells Art&Seek the difference between making merchandise and fine art. He also explains why he thinks it’s important that he makes souvenirs.

Yeah, you know I have come to a different answer to that then maybe when I first started on this exhibition. I used to think that this popularity came from the recognizability of his imagery, especially the things that are a bit more cartoons, like the flowers and Mr.Dob and things like that, that people recognize and attribute to him immediately. I think that the way he has created so much merchandise- not just multimillion-dollar paintings but it can be a five dollar keychain or a $10 mouse pad – has democratized his art in a way that normal people, young people can have a bit of Murakami and have a connection to them that’s totally authentic. You know, it’s not watered down. He considered those to be really important and totally genuine objects. And so that’s allowed a whole variety of different generations to make contact with his work and have a connection that I don’t think you have when someone is just working at the rarified level of culture where it’s only in high-end art galleries and museums and sells for lots and lots and lots of money.

But even more recently, I think his work on Instagram and how he is again pulling back the curtain on his creative process showing himself ragged and with the flu and picking wax out of his ears, and showing painting unfinished and stressing out about deadlines –  I mean he’s letting all that out and people recognize that as, “wow, there’s a human behind this work and maybe I can empathize with what he’s doing,” in a way that again you don’t find with other artist that are of his stature.

As a reporter, I get to go into artist’s studios and behind the scenes of theatrical performances. As a curator, I have to imagine there are similar “behind the scenes” experiences. What’s the most interesting thing you’ve learned about Takashi Murakami?

I think that one of the things that’s great about him is his insecurity and his anxiety. I think he owns it and expresses it and tells people that he’s going through that as he’s trying to prepare a new exhibition. Of course, I think that’s also what fuels him. I think he likes being kind of on that edge and pushing himself and so it’s never just a lazy day in the studio where he’s just dabbing some paint on the canvas. You know, there’s always some task that often can be a seemingly insurmountable task that he puts in front of himself and that’s what pushes him forward. And I think that when people see the scale and the complexity of these paintings, and even the sculptures, they’ll recognize that this isn’t just easy, casual work; this is something really intense going on there.

Well, Michael Darling thank you so much for taking time to talk with us I really appreciate your time.

Your welcome, its fun for me to talk about this.