Heart Of The Headwrap

Dallas artist Chesley Antoinette informs North Texans about how headwraps went from statements of oppression to statements of power. 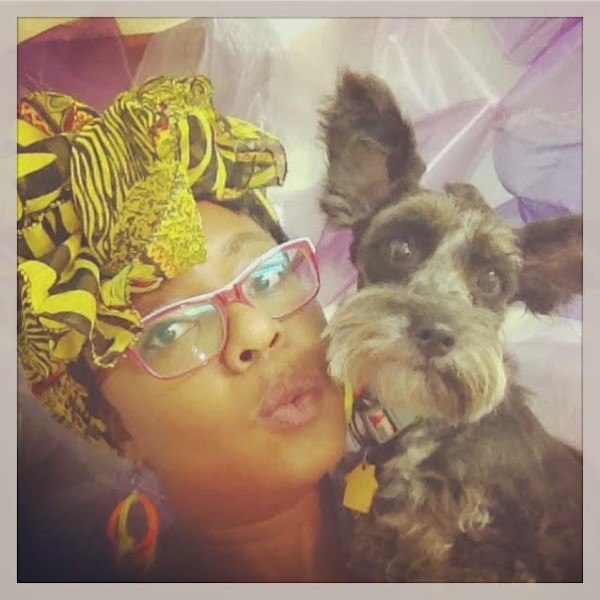 Chesley Antoinette is from Central Texas, and moved in 2010 to study at the University of North Texas' Fibers Program. Antoinette makes wearable art out of found items. Recently, she's started collaborative projects that combine her wearable pieces with music, dancing or re-designing spaces. She won grants from the City of Dallas' Office of Cultural Affairs and the Nasher Sculpture Center for "Heart of the Headwrap,"  a project to educate people about the African American history behind the garb.

African and African American women have worn headwraps for hundreds of years. Some wear them for religious or cultural purposes, others for fashion. Chesley Antoinette – a wearable art designer – is working to educate North Texans about the garb’s transition from a statement of oppression to statement of power.

Interested in attending a “Heart of the Headwrap” workshop? They’ll be taking place from June through August. Details here.

“I teach down the road at Mountain View College – face to face. And then I teach online for both Tarrant County and Corsicana,” says Antoinette.

Even though she’s pretty busy with teaching art history and intro to arts courses for her schools, she manages to make the most of her situation.

“Online teaching allows me to work from home,” says Antoinette. “That then allows me to balance out making artwork simultaneously.”

Her small, two-bedroom house in Oak Cliff doubles as an art studio. And after spending five minutes in the space, it’s clear her artwork does not take a backseat to teaching.

The living room is filled with tables – two of which have sewing machines on them. The walls are covered with fabrics and old art projects and head pieces designed by Antoinette are scattered across her fireplace mantel. But it’s not just the living room. Her dining room and hallway have been invaded by supplies, equipment and art.

“There’s even more in the second bedroom,” Antoinette says as she leads me through the hallway. “there’s more of the pieces in this room, which I call my junk room because it’s where I can just throw stuff.”

Chesley Antoinette shows off some of the work she’s completed and the nearly 150 scarves she’s collected. Photo: Hady Mawajdeh

Antoinette uses a drill press, a bandsaw and tons of knickknacks to design and create wearable art. Her specialty? Headpieces. And these works would stand out at any Sunday morning church service. They’re basically small sculptures crafted from found and recycled materials.

“This one’s not finished,” Antoinette says as she points to a white mannequin with dangling plastic pieces and small green fasteners. “It’s still in progress, but these are like some Lego pieces. And then we’ve got some zip ties. And then we have – I’m not sure exactly what this rubber plastic, shiny, black material is.”

The piece is almost alien. And Antoinette says it’s going to be pretty large. She’s planning to add nylon seat belt material to create a sort of turban.

But her next project will be a bit different. It’s called “Heart of the Headwrap.” And it’s inspired by a Louisiana law requiring free and enslaved women of color to wear headwraps, often referred to as tignons. The law was created by a Spanish governor in 1786.

“I think he wanted to kind of put his stamp on he regarded how women of color should be perceived, which is as a lesser person,” says Whitney Stewart.

Stewart’s a historian who studies African American Material Culture at the University of Texas at Dallas.

She says headwraps were worn across the globe. This law tried to make the tignon a sign of slavery – almost like a prison uniform. But women were able to reclaim the headwrap for their own purposes.

“Women would put feathers, they would put pearls, they would make sure that their headwrap went perfectly with their dress,” says Stewart. “They became kind of art pieces.”

Instead of stigmatizing women of color, headwraps helped them show off their fashion sense and made them seem worldly in the international city of New Orleans.

“That really allowed them room and space to gain a little bit of power back from that law,” Stewart says.

Few know this history. Usually, Stewart says headwraps in North America are often tied to the Antebellum South and the Mammy caricature.

Headwraps being created by Antoinette for “Heart of the Headwrap’s” photoshoot. Photo: Hady Mawajdeh

Antoinette hopes to change this. In June, she’ll use grants from Dallas’ Office of  Cultural Affairs and the Nasher Sculpture Center to host workshops at community centers and churches. She will tell women about Louisiana’s 1786 Tignon Law and share her own headwrap techniques.

“Whoever wants to participate can, and my goal is to try and reach 150 women and girls, so to give away 150 scarfs,” says Antoinette.

The project doesn’t end there. After the workshop, Antoinette invites participants to a photoshoot. She wants to recreate 18-th century paintings using modern women of color in headwraps.

“We try and embody who these women were. You know? And perhaps walk away feeling more empowered not only with the history, but with how you can wear the headwrap,” Antoinette says.

Turning an old symbol of slavery into a point of pride.

Chesley Antoinette in front of an installation she crafted. Photo: Sunset Art Studio

I feel that living here – in North Texas – offers me a great opportunity as an artist who’s producing both exhibition artwork and everyday commercial accessories. I find Dallas to be an affordable place to live and on top of that there are so many connections and resources to the fashion industry. And those connections can help lead me towards a successful career.

Who purchases wearable art? It’s part sculpture, part fashionwear. Who is your consumer?

My typical customers are performance artists, musicians or anyone who would be on the stage. Those are typically the people that are bold enough to wear the work or that could relate to the desire of wanting to stand out. That being said, I know a few of them (people who want to stand out), but not a lot. (laughs) I need to know more in order to sustain a practical business, but I think that sort of thing comes with time. Just as with any designer. If you were looking at a young fashion designer or somebody starting off, you know, before they get to couture they’re probably making every-day wear or ready-to-wear clothing first. Before a designer becomes well-known and is in a place where they can think and create stuff that is much more “out there,” they’ve got to start out small. It’s a step-by-step process.

Your work is very sculptural. Are you creating with a shape in mind? Or are you envisioning the work on a head during the creative process?

When I first started, I was definitely thinking about shape and sculpture first. I would make the object first and then I would figure out a way to fit it on the head. And I think that was probably one of my most creative moments or periods – my earlier part of my career. But now I am a little bit more practical. I’ve definitely started using the mannequin heads more often, so that the head pieces actually fit. And also, doing so has allowed me to reach a larger audience.

Early on, the work was almost exclusively pedestal pieces in an art gallery, which is cool and all, but I also want to make an income off of the work as well. Some of that stuff wasn’t very practical when it comes to selling in the market. (laughs)

Have you been able to quit your day job?

I have not been able to quit my job as an adjunct professor. And I have managed by finding a balance in how I want to work. For instance, I do a lot of online teaching. Online teaching allows me to not have to physically be somewhere at a specific time. It also allows me to work from home, which allows me to concentrate on my actual artwork.

When did you begin to call yourself an artist?

Probably about seven or eight years ago, when I was 22 years old. Right when I graduated, I started doing market/pop up shows and I would sell head pieces and people saw me as an artist. I was making things that were unique and that they hadn’t seen before and. . . I think it was kind of obvious. (laughs)

Am I creatively satisfied? Never. (laughs) There’s always so many projects. I have tons of ideas and very little resources – both time and money – so I am not satisfied.

What sets you apart from other artist working in your medium?

I think the way that I transform materials. I mean, I know there are a lot of people out there – like a billion people – but through Instagram and Facebook and everywhere else, I really haven’t found a whole lot of artists that are working like me. I mean that in the sense that how I make turbans, the materials that I use to make earrings or head pieces. I haven’t seen a whole lot of creative transformations that really push beyond what I am creating. So I think that’s what sets me apart. It’s about how I put things together and how I put materials together in a way that no one else would think about.

What do you hope that audiences take away from your work?

Well, I definitely hope people feel more power to embrace being bold. You know? I think people love my stuff. For example, someone may see my headwraps or my earrings or whatever and they will walk up to me and say, “Oh my goodness! I love that, but I could never pull it off.” So I would really like it if people came away from my work feeling more empowered to be a little bit flashier. (laughs)