E.B. The Younger is Eric Pulido's new solo project. But the 20-year vet and leader of BNQT and Midlake says the new music is just a fun outlet for stuff he can't make with his super busy friends. We caught up with him at SXSW where he debuted the project to thousands of potential fans. 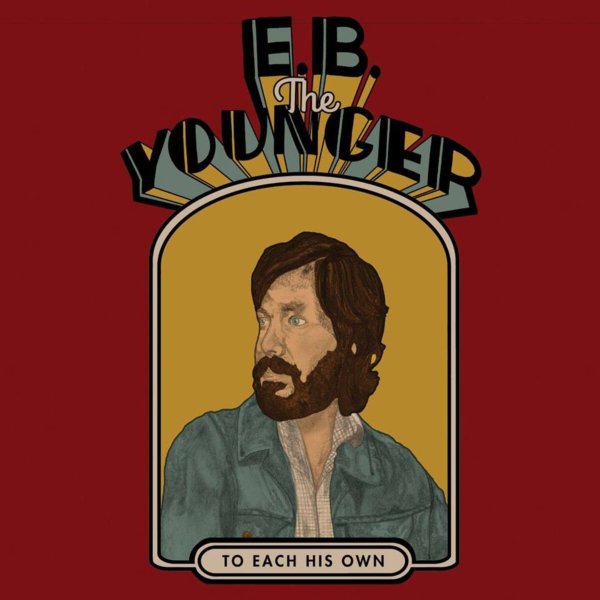 Eric Pulido has been the frontman for the Denton band Midlake and the indie supergroup BNQT. Now he's striking out on his own and making music under the name E.B. The Younger. The project has him working in genres he's never explored professionally and it's a vehicle for more personal songs.

Eric Pulido and Midlake have a close tie with the city of Denton. Read about it in this sweet 2017 ‘Texas Monthly’ article.

with members of Franz Ferdinand and Granddaddy. Now he’s striking out on his own. For this week’s Art&Seek Spotlight, we caught up with Pulido at South by Southwest to talk about his new solo project.

It’s 11 a.m. on Friday morning, Day 3 of the South by Southwest Music Festival. And Eric Pulido and his band are on stage for the sixth time in 48 hours. The crowd is sleepy – probably hungover – and they’re a little disengaged. So the 20-year music vet tries to break the ice with a one-chord, Harry Nilsson-inspired song he’s made up on the spot.

“Flatstock, flatstock, flatstock,” he sings as his backing band made up of members of the North Texas group The Texas Gentlemen begin playing keys and strumming their guitars. The song’s inspired by the location of the concert – a tradeshow for poster makers called Flatstock. The crowd laughs. But not too hard. Fearful of the stabbing pain their alcohol-soaked brains might feel if they get too excited.

“So if you haven’t lost interest already, we’re gonna start playing some songs,” says Pulido. “This first song is part of my solo project. It’s called E.B. the Younger.” And then he breaks into one of the singles off the new album. (See a brand new video for this song made with Jason Lee and Art&Seek Spotlight Artist Exploredinary in the video below.)

Suddenly, the lethargic crowd wakes up. A few of the people who’ve been standing in the back of the concert space move forward. And now, they’re sitting on the floor swaying to the boozy tune and laughing at Pulido’s sardonic lyrics about transitioning into adulthood.

“I’m having trouble getting sleep these days, could be the boy, all my old fashion ways,” he sings. “When the time comes, I’ll work it out in the next stage of life, star in a movie that displays my strife, when the time comes.”

The crazy schedule and odd performance times at South by Southwest can be hard on emerging artists. But Pulido, who’s nearing 40-years-old and has been to the festival a dozen times, loves it.

“These types of events are kind of great just because a lot of people are in one place at one time that you usually wouldn’t see,” he explains. “So I am kind of an unabashed fan of SXSW and just being down here. I don’t mind joining the circus for a week.”

“when i did ‘the great escape,’ i kept thinking, ‘if they were making a movie of my life, that’s what they’d call it – the great escape.’ -steve mcqueen avec @ebtheyounger ⚡️

Pulido first came to SXSW in 2003, with his band Midlake. At that time, the Denton act was fledgling. Since then, they’ve toured the world, released several albums and have etched out the sort of career most musicians dream of.

“I was talking to McKenzie Smith (Midlake’s drummer) about the first time we came to SXSW on the way down to Austin,” says Pulido, “And we can’t remember how many times we’ve been here. I mean, we were touring a few of the years. But we’ve been coming here for a long time. We’re getting old and SXSW is staying the same age (laughs).”

Midlake released their first EP in 2004, but the group had started forming in the years prior. Relatively speaking, it didn’t take long for them to become “established” within the music industry. By 2006, they had become North Texas favorites because of their expert musicianship on songs like “Roscoe” with its wandering musical interludes and The Band-inspired sound.

Along the way, the group took over Denton. Smith opened a recording studio and bar & kitchen. And Pulido became an unofficial spokesman for music and culture in Denton. He started programming acts at local venues. He opened the cool cocktail spot Pascal’s Bar with his bandmates. And he even started his own design firm.

“With Midlake, even though we took a lot of different left turns and our influences varied as the years went by, it kind of felt like it fit in a certain world,” says Pulido. “And you always try to ignore that ‘filter’ that exists. But it’s hard. So with BNQT or E.B. The Younger, I know that doesn’t exist. At all. No baggage. I can play a song with a calypso vibe and then go to an early Eagles-influenced, folk-country song and it’d be fine. ‘Cause the only person who could get upset with me is myself. Ya know?”

Pulido spent all that new alone time writing more personal songs, like this one. (listen above) It’s called “CLP” and sounds nothing like a Midlake song.

“That’s about my son,” he explains. “Those are his initials. Conrad Lee Pulido. And we were listening to a lot of Harry Belafonte when he was a kid and calypso-type music and it was just a way that it just filtered through that experience with my son. And I wanted to celebrate it and just have fun with it.”

The album’s called “To Each His Own.” And when it’s not sentimental, it’s funny. The song “Don’t Forget Me,” laughably asks listeners to remember Pulido “when the world’s a ball of fire,” or “when it’s frozen in Ice Age times” or “neck-deep in a flood.”  Why? Well, Pulido says, because sometimes we’re consumed with ourselves and we want all the attention. (listen below)

“It’s kind of a way of making fun of that relationship and that idea of thinking that the world revolves around us,” he says. “And it really doesn’t but obviously we all get stuck in that rut and you think that. You know?”

Pulido might have meant it as a joke, but with projects like E.B the Younger and BNQT, he’s doing everything he can to ensure Midlake fans and North Texans don’t forget him.

We done did the @sxsw thang! Much love and thanks to these fine gents and all y’all folks that joined us for a set 🙏🏼 Now, let’s get some sleep! 💤. . . Photo by: @darkmatterdreams