Dallas artists Sarah Reyes and Daniel Driensky explore the ordinary and find the extraordinary. We find out about some of their endeavors. 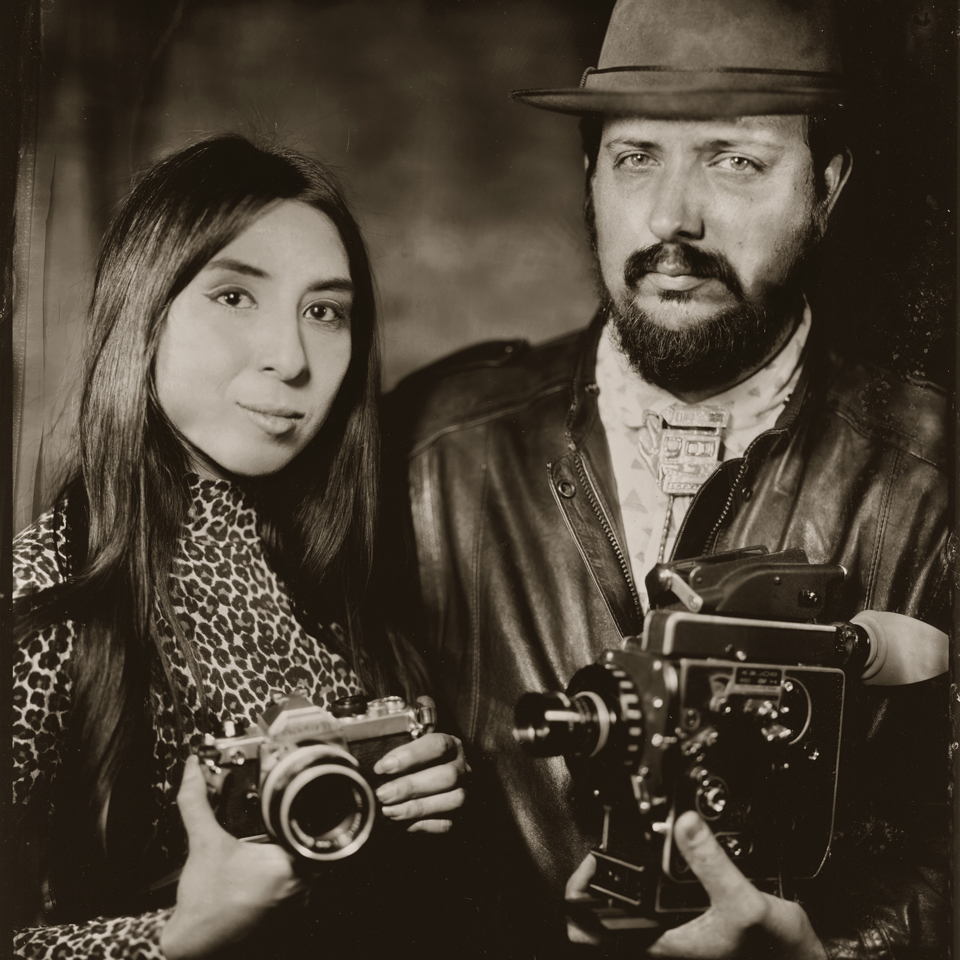 Sarah Reyes and Daniel Driensky are Dallas-based artists who dabble in all sorts of artistic endeavors. They're most well-known for their filmmaking and photography, but the duo has produced visual artworks like drawings, sculpture, mural painting and even sign making. The subjects of their films are ordinary people who do extraordinary things.

It’s risky, imperfect and it’s expensive. But 16 millimeter film is beloved. Experts praise the film for its denser colors – and a richer texture than digital images. In this week’s Art&Seek Artist Spotlight, I hit the street with two North Texans who use this film to explore the extraordinary in the ordinary.

It’s a frigid 30-degrees in Oak Cliff and I’m standing outside the Texas Theater with Sarah Reyes and Daniel Driensky.

“All right. I’m gonna try to compose this shot real quick here with this guy walking down the street,” says Driensky, clutching onto his vintage camera. He’s hurrying to make sure the passerby doesn’t walk out of his frame.

The pair are working on a new project they call ‘Life On 16mm.’ And Reyes is already scouting the next spot the two will shoot from. “Go ahead and grab the corner and then we’ll get directly across [from the Texas Theater] and put the close-up lens back on,” she says.

The project’s a series of vignettes – each less than 60 seconds (view one below). They’re shooting these slices of life with a 1970s movie camera called a Bolex. The Bolex uses thin, old-school, celluloid film. And it gives images a vintage look. Reyes says shooting with it is an imperfect art.

“I think there’s an element of surprise with film,” says Reyes when talking about ‘Life on 16mm.’ “There’s so many irregularities that you can’t anticipate. So what you get back is totally different than you would get back with digital. With digital, you know exactly what you’re capturing, but you lack those imperfections that humans really crave.”

Reyes and Driensky posing in their work space.

In December of 2015, they founded the creative agency Exploredinary. Since then, the two have dabbled in mural painting, photography, sculpture and drawing. But their bread and butter – the thing they’re really known for – is filmmaking.

“As artists we’re always looking for unique perspectives on things that people see every day,” Driensky says. “That’s kind of where we developed our name ‘Exploredinary’ – exploring the ordinary.”

Exploring the ordinary isn’t just a tagline. It’s how they operate. Reyes and Driensky follow their curiosity. It’s led them to profile sign makers, puppeteers, a record shop employee — subjects you wouldn’t necessarily think are worthy of concentrated attention. Reyes says they try to see things through a foreigner’s perspective.

“When you’re somewhere foreign and you’re seeing things for the first time, you become so infatuated and instantly enamored with places. And I just don’t understand why you shouldn’t be able to have the same perspective in your own home, in your own city,” Reyes says.

Having a fresh point of view has paid off. Jason Lee – the actor and producer – hired them to produce a documentary last year. And rising stars like Leon Bridges and Kaela Sinclair turn to Exploredinary for videos and photos. But it’s not just entertainers. It’s news people, too.

“Ain’t nobody in this business only print any more, pal,” That’s journalist Joe Pappalardo. Pappalardo was the managing editor of the Dallas Observer. And he’s worked with Exploredinary on several projects at the weekly. “Everyone has to be cognizant of video or be able to shoot or edit on their own or else you are sunk. Everything is multimedia these days.”

Pappalardo says lots of folks can shoot, edit and tell stories. He thinks Exploredinary is special, though.

“You don’t even have to aim them. You just have to talk to them. And then you realize that their entire reason for existence is meeting interesting people who are doing interesting things,” explains Pappalardo. He says they provide “glimpses into worlds you wouldn’t otherwise see. They’re a whole other kind of a force.”

Back in Oak Cliff, the duo are gauging light levels as the sun is beginning to fade.

“I wanna get some of those facades on Jefferson Boulevard here,” says Driensky as he slides his pocket-sized light meter into his pocket. “I feel like they’re disappearing more and more everyday.”

We’re in front of the Texas Theater again and the pair have zeroed in on where to get their final shot. It’s in between four lanes of two-way traffic.

Reyes shot on top of a Dallas rooftop.
Photo: Exploredinary

“You’re going to have to get in the median,” Reyes says to Driensky. He begins to laugh and she continues, “I mean you could,” she says excitedly, “Let’s just go.” Suddenly, we’re walking out into the middle of the street and posting up in between the four lanes waiting to capture a perfect shot.

This project – ‘Life on 16mm’ – is a series of short films that can currently only be seen on Instagram. But Exploredinary hopes future projects might jump from your digital screen to a movie screen — like the one inside the Texas Theater.

DD: We’re constantly striving for more. I don’t think we’ll ever plateau and stop. But it’s all about the journey to discover new things.

What have you had to give up to pursue your career?

DD: You had to give up your architecture career.

SR: I didn’t exactly give that up…

DD: Well we’ve kind of created a very niche career for ourselves, so I wouldn’t say that we’re giving anything up that we miss per se, because we try to do a little bit of this and a little bit of that. And we always try to make room for anything that we might be passionate about.

Do you all have any rituals or routines that you do prior or during the creative process?

DD: There’s this local artist who we’re friends with. Her name is Shamsy. And she creates these amazing things she calls ‘Witch Sticks.’ They’re sage, rosemary and all wonderful herbs [that she ties together] and if you burn them and kind of say a little prayer . . . . all of your dreams come true. (laughs)

SR: No. Seriously. They are called ‘Witch Sticks.’ But they’re ‘good vibe’ bundles and they’re like herbal blends. And so we kind of take a little bit of time every morning to burn a little bit of the incense and kind of speak words into action. We talk about our dreams, ambitions, our desires. And it’s helped us stay on track. We do that every day.

DD: There are other things too. Like we make sure we always have charged batteries or that we’re carrying extra film. But those are more checklist items.

DD: Well, we watch a lot of documentary films. And we both really like the posthumous stories. You know, like when an artist dies but you never really knew the whole story. It’s great to see the creativity of how they use archival footage or do voiceovers. But documentary films in general, because we like the way that people tell stories.

We love the films of Wes Anderson. It’s fun to see how he has a playful take on storytelling. And of course, the classic filmmakers like Scorsese. We blend all that in our heads and it comes out in our films.

SR: I love seeing people get passionate about what they do. I think we do a good job of spotting talent and we’re curious about them. We want to know more and more. I think ultimately that I am just generally interested in people.

Growing up between two cultures [my parents were immigrants who moved here to work, but I was raised here and saw differences] I was always really perceptive about the way that people are. I guess you could say that I have always been perceiving things from two points of view. And I think a lot of people have one point of view and they’re very set in their way and set in the way they see the world, but I had a more broad perspective. So for me, knowing and understanding people’s motivations has always been very interesting to me.

You both talk a lot about ‘community.’ Your creative community, the Dallas community and so on. Why is community important to your art?

SR: For the most part, we really like and respect the people we’re working with. There are occasions where we’re only meeting our subject on the day of shoots or projects, so those are a little bit different. But generally we legitimately are wanting to know more their craft or their talent. So community is really important to us, because –

DD: I think part of it is a gathering of ideas. Like Dallas has this growing film community and we all gather (or at least folks who shoot on film) at Photographique [in Deep Ellum]. That’s where we get to see what other people are shooting photos of or what sorts of cameras they’re shooting on. So to me, community really brings people together physically, but also in thought and idea.

SR: Yea! Like recently we shot a project called ‘Our City’ in Los Angeles. For the project, we were documenting 18 different individuals who all shot on film. And so getting to share their information and process in a collective manner really excited other LA-based photographers who were shooting on film.

And so when you can find people that are doing similar things and create a network – a community – it excites people. It creates a competitive, yet still great environment. That’s why we love community.

How does being in North Texas affect the production of your art?

DD: I think being a filmmaker in North Texas makes it a lot easier to stand out. So when people come to town, there are less options than in New York or LA. Plus, there are so many interesting people and stories that need to be shared in North Texas.

SR: Yea. The film community isn’t nearly as saturated here as it is in the coastal cities.

When did you first start calling yourselves artist?

DD: I’ve definitely always been into art. Even in elementary school. I honestly only ever focused on art. Like as a kid I would go into a math class and doodle all over the math quizzes. And my teachers would write things like, ‘Nice drawings.’ But the grades would be C’s or something. So I guess I’ve always been focused on art.

But when you get a little bit older and you find out how to monetize your passion – that’s when you really feel like you’ve made it as an artist. When you can sell what you’ve got to offer to other people, it becomes this connection, this bond that you’ve formed with a complete stranger. And I guess I’ve been doing that for about 10 years.

SR: I would say that I started calling myself an artist when I quit my job and my pursuit of being an architect about two years ago. And I think taking the leap into the freelance life and being able to survive, provide for myself and help other people has been an incredible experience. But it was around then that I thought, I am a professional artist.