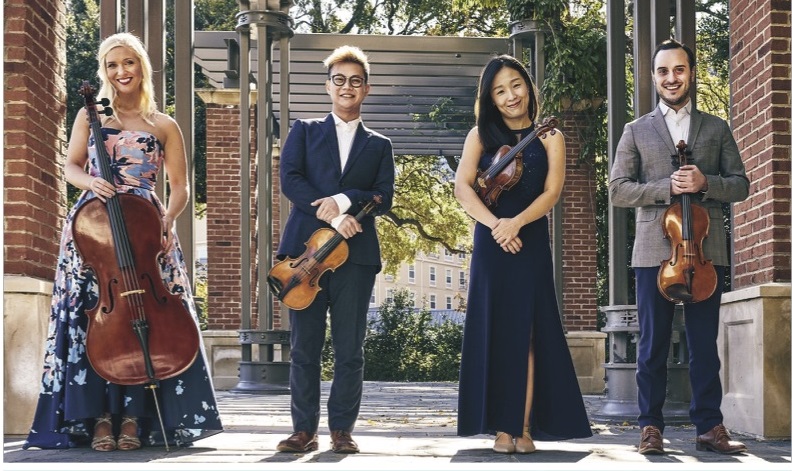 APEX Arts League is delighted to present the Julius Quartet, with pianist Mikhail Berestnev, in ‘A Mother’s Day Concert’ at 6pm, Sunday May 12, 2019 in Grace Chapel at White’s Chapel United Methodist Church in Southlake. The concert will feature works by Joseph Haydn, Fanny Mendelssohn and Robert Schumann, in a program that celebrates the profound influence and enlightenment of woman in music. Light refreshments will be served following the concert.

Hailed as “the captivating young string quartet” (The Bennington Banner), the Julius Quartet is rapidly making itself known in the chamber music world. Formed in the fall of 2012, the quartet is the Peak Fellowship Ensemble-in-Residence at Southern Methodist University’ Meadows School of the Arts, having served in numerous prestigious capacities including as Graduate Quartet-in-Residence at the John J. Cali School of Music at Montclair State University (where they were mentored by the celebrated Shanghai Quartet) and as “The Boston Conservatory’s Honors String Quartet”. The Julius Quartet has concertized at esteemed venues across the United States including the Shalin Liu Performance Hall at Rockport Music in Massachusetts, the Moss Arts Center in Virginia, Bing Concert Hall at Stanford University, Alexandar Kassar Theater in New Jersey, and Carnegie Hall’s Weill Recital Hall New York.

As part of APEX’s Chamber Music Series, concert tickets and APEX Membership can be purchased at www.apexartsleague.com, as well as at the door. General admission $20; Senior, Students & APEX Members $15.