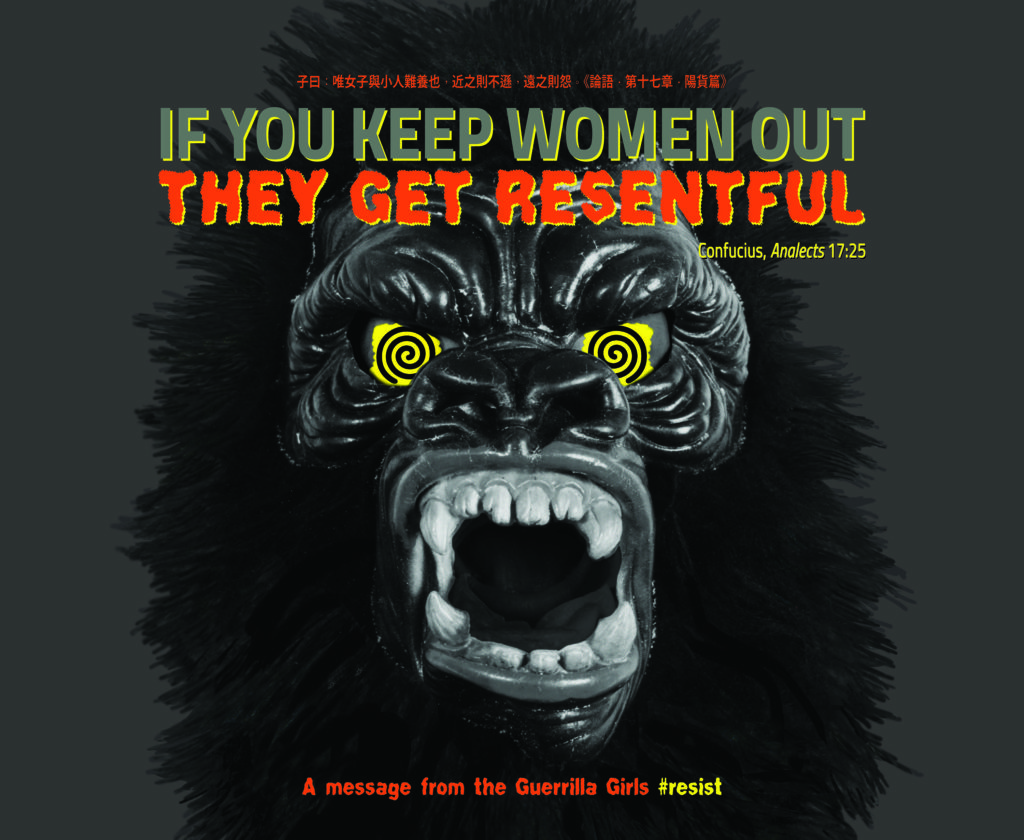 CYDONIA is pleased to announce Battle Cry, a solo exhibition featuring the Guerrilla Girls. This non- commercial exhibition will open on September 7, 2018 and run until October 28, 2018. A reception will take place from 6 pm to 9pm on Friday, September 7. Along with a brand new poster addressing the #MeToo movement, posters will be mounted in the second floor gallery and throughout the historic Texas Theatre in guerrilla communication style. A collection of videos will be screened inside the movie theatre.

This exhibition functions as a bookend to the gallery’s inaugural exhibition from 2014, Ex-Y: Representations of Contemporary Masculinity, observing depictions of maleness after three waves of feminism. Using pseudonyms of historically significant female artists and donning gorilla masks, the Guerrilla Girls employ anonymity in their mission to expose cultural misogyny and discrimination. The artist-activist group serves as vigilantes and conscience for all realms of the art industry, in both public and private sectors. This exhibition is not only a celebratory survey of their work over the past three decades, but is also a mirror revealing the past, present, and future of what being ‘women in the arts’ entails: warfare with our own brethren and at its most heartbreaking, our sistren. The Guerrilla Girls, by their namesake, present an aestheticization of war. For those with the courage to partake, art is war.

Art, de facto, is ideas. War, de-weaponized, remains a conflict between ideologies. Our current era presents a cultural shift dominated by egalitarian values: changing attitudes about sexuality, gender, and privilege; campaigns against harassment; increased conversation about what constitutes consent; and attention to racial inequity post-Obama. Since 1985, the Guerrilla Girls have been at the forefront of these progressive ideas. Crossing, rather than straddling, the zone between art and protest with their posters, books, and public appearances, their agitprop practice utilize guerrilla warfare strategy. Their brand of modern warfare is two-fold, with both direct and indirect devices. Challenging the hegemony of gender, class, and race in the art world, they deploy humor and posters as weapons of insurgency, rebelling against those in positions of (sometimes self-appointed) authority. The New York City based group refuses to be accomplices in the hypocrisy of the art sector’s matrix of power. The Guerrilla Girls’ call to arms is a call for accountability and inclusion. To be human means to be better, when we know better. The burden of enlightenment is change.

The value of Guerrilla Girls’ practice transcends objecthood or performance. Roberta Smith criticizes feminist exhibitions: "Feminism is not a style or a formal approach. It is a philosophy, an attitude, and a political instrument. It is more important than Pop, Minimalism or Conceptual art because it is by its very nature bigger than they are, more far-reaching and life affecting. In addition, feminism is not of itself an aesthetic value. It is an idea that can assume an organic force in some artist’s work, but others just pay it lip service without much exertion or passion.”1 The Guerrilla Girls’ paid every act of ‘lipservice’ with ample exertion, passion, and intimidating wit. Like any marginalized people, their anger is a shield used to preserve dignity. However, the Guerrilla Girls’ approach is equally dependent on an ancillary instrument: humor. Humor encrypts their message, ensuring that communication is not unilateral. They demand viewer participation and contemplation. Satire is the indirect dispatch that creates powerful micro-implosions within the edifice of systemic discrimination.

In contrast to most gallery exhibitions where ideas and objects are unpacked for conceptual insight, this exhibition is an act of resistance, unity, and hope. The installation will take place beyond the ‘white cube’ of the gallery, subverting traditional art display methods. This show directs our attention to the bifurcation of gender, the most innate of all divisions between humans and the source of, arguably, the deepest form of discrimination. What has the world missed out on due to exclusionist practices? In the arena of contemporary art, where dialogues about the conditions of our society are first introduced, why are female artists, curators, practitioners still subject to antiquated stereotypes and chauvinism? The #MeToo moment revealed how the seemingly evolved art community was neither immune to nor above barbarism. How can we teach incoming generations gender equality when women are eroticized and depicted in the nude, over and over again, in the world’s best museums, our temples of culture? The way things are today is because of the way things were.

The practice of the Guerrilla Girls moves through art into politics. Bold headlines in their posters level sardonic accusations against collectors, gallerists, curators, museums, and other cultural producers. Even if their message is delivered with flippant belligerence, the message and the messengers are not wrong. They provide clear and convincing evidence, and in this way, their work functions as a moral fait accompli once experienced. Who is willing and able to remedy their appeal for equality?

“When I'm sometimes asked when will there be enough [women on the Supreme Court] and I say, 'When there are nine,' people are shocked. But there'd been nine men, and nobody's ever raised a question about that.”
― Ruth Bader Ginsburg

Statement from the Guerrilla Girls:
The Guerrilla Girls are feminist activist artists. Over 55 people have been members over the years, some for weeks, some for decades. Our anonymity keeps the focus on the issues, and away from who we might be. We wear gorilla masks in public and use facts, humor and outrageous visuals to expose gender and ethnic bias as well as corruption in politics, art, film, and pop culture. We undermine the idea of a mainstream narrative by revealing the understory, the subtext, the overlooked, and the downright unfair. We believe in an intersectional feminism that fights discrimination and supports human rights for all people and all genders. We have done over 100 street projects, posters and stickers all over the world, including New York, Los Angeles, Minneapolis, Mexico City, Istanbul, London, Bilbao, Rotterdam, and Shanghai, to name just a few. We also do projects and exhibitions at museums, attacking them for their bad behavior and discriminatory practices right on their own walls, including our 2015 stealth projection about income inequality and the super rich hijacking art on the façade of the Whitney Museum in New York. Our retrospectives in Bilbao and Madrid, Guerrilla Girls 1985-2015, and our US traveling exhibition, Guerrilla Girls: Not Ready To Make Nice, have attracted thousands. We could be anyone. We are everywhere. What’s next? More creative complaining!! New projects in London, Paris, Cologne, and more!

CYDONIA is the one of two commercial spaces in Dallas-Fort Worth operated by a minority woman. From its inception, the gallery team has consisted entirely of women who have supported artists, directing, handling, constructing, and mounting ambitious installations that demanded complex fabrication. Since 2014, the gallery has exhibited astounding statistics. 69% of the gallery’s solo/two-person shows featured women. Women were included in 71% of exhibition programming. Women were featured 86% of the time in fair presentations. Curated group shows included female artists 100% of the time. The 2016-2017 exhibition year featured women exclusively, in both gallery and fair presentations abroad. CYDONIA was the first internationally focused gallery in the metropolitan area, having introduced 14 different artists to the US. Most importantly, each artist was always selected based on merit and not assimilation. The historic Texas Theatre, CYDONIA’s venue partner, paid tribute to female programming/female filmmakers during 2018 Oak Cliff Film Festival, with Joan Jett’s documentary Bad Reputation as the headliner.

CYDONIA is a contemporary art gallery. Our programming is committed to co-operating with artists whose practices reflect conceptual research. We approach art as a cultural good related to reciprocity, praxis, and discourse. For more information, please contact info@cydoniagallery.com, call 214-296-4848, or visit www.cydoniagallery.com.