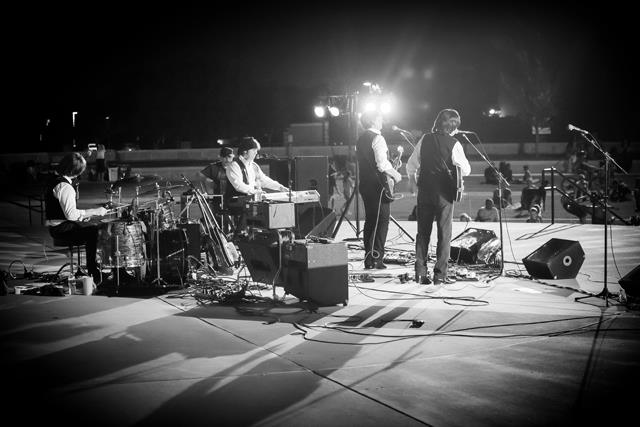 Southlake MasterWorks - Me & My Monkey, "The Beatles" Tribute Band

With its two original members, George Jara and Rod Bollinger (George Harrison and John Lennon), since its initiation the band have added two other members, Michael Daniel and Paul Sacco (Ringo Starr and Paul McCartney). This group of four concludes the line-up of the Beatles tribute band Me and My Monkey. They have traveled widely perfecting their talents. Me and My Monkey have appeared in various television shows, headlined numerous festivals and performed as the opening act for a hand full of classic rock favorites in the United States. The band has also toured around the U.S and performed in the U.K.  As Paul Sacco said in an interview “We feel there is only one way to do this…the right way. We’ll stop at nothing to give people the feeling that they are actually seeing and hearing the Beatles live.” “We actually are very competitive within the band itself, as far as the attention to detail. We are our own toughest critics.”  The Fort Worth Weekly elected Me and My Monkey as the Best Cover Band 2003.

Through the MasterWorks Series, Arts Council Northeast and the City of Southlake present free performances on selected evenings throughout the year. The MasterWorks Series is designed to offer a variety of quality family entertainment to the community by utilizing the talent of local, regional, and national artists.