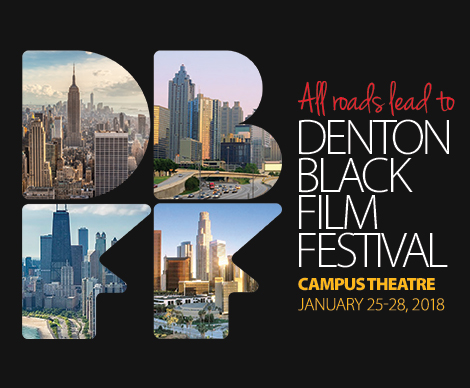 DBFF18 is slated for January 25-28, 2018, and will feature about 50 films including  narratives, documentaries, and shorts i.e. College student and  films with Women directors,  submitted by filmmakers nationwide and internationally. Screenings will be held at the historic Campus Theatre in downtown Denton and  a new venue this year- the Black Box Theater.

Main attractions and activities during the festival include "A Musical Journey with Frank McComb", the internationally acclaimed  whose combination of R&B, smooth jazz, and gospel has made him a highly sought-after performer in venues around the world. At UNT on the Square Art Gallery from January 8th until February 3rd  is  Freedman Town 2.0 an interactive gallery exhibition created by Carla Lyndale Carter and 18 UNT students utilizing the Augmented Reality App, Aurasma, to celebrate the life and history of black communities in Denton, Texas. Other ancillary events are a "Poetry Get Down and Slam", Comedy show, Industry panels, workshops, and a Master Class.

Harry Eaddy, the Festival Director says “We are beyond thrilled at the success of our first three years. As we expand our reach to a national audience, our goal is to make DBFF an acclaimed platform for filmmakers from all over the world while maintaining our focus on building and sharing community here in Denton and North Texas at large.”