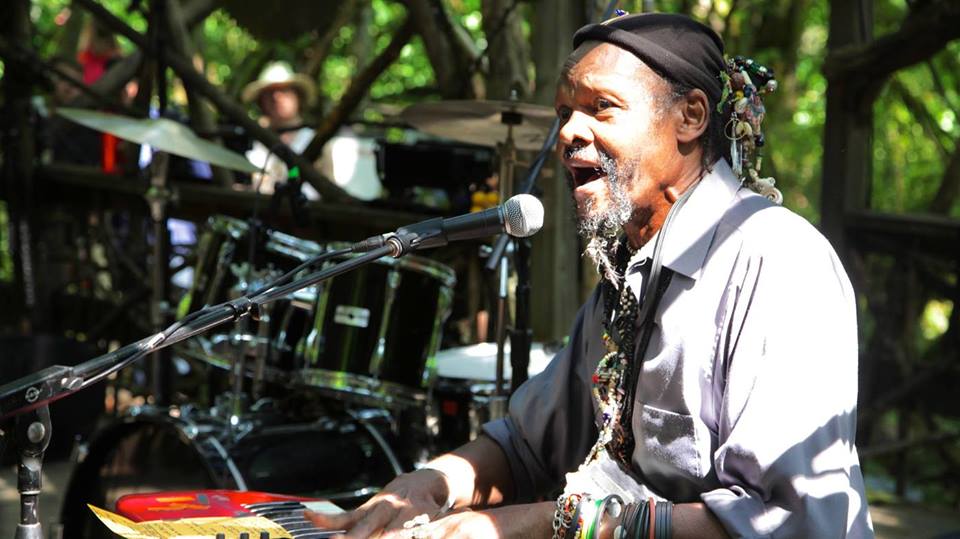 Lonnie Holley began making art at the age of twenty-nine. By that time, Holley, who grew up the seventh of twenty-seven children in Jim Crow-era Alabama, had been a gravedigger, a dishwasher at Disney World, pronounced brain-dead after a car accident, and once, as a very young child, been traded to a neighbor by his adopted guardian for a pint of whiskey.

(Some of Holley’s stories might not hold up to very strict fact checking, but now, at the age of sixty-four and respected worldwide as an artist, he tells them well.)

Holley’s art is now in museum and private collections worldwide, and in the pst decade he has added music to his accomplishments, performing for often awestruck audiences at museums, universities and clubs throughout the United States and Europe.

Writing for The New York Times in 2014, Mark Binelli has said, “In terms of genre, Holley’s music is largely unclassifiable: haunting vocals accompanied by rudimentary keyboard effects, progressing without any traditional song structure — no choruses, chord changes or consistent melody whatsoever…Backstage, only a few minutes before showtime, I learned that each of his pieces is actually a one-time performance; his words and music, whether in the studio or on a stage, are entirely improvised.”

Lonnie Holley’s performance at The South Dallas Cultural Center is a rare opportunity for the Dallas audience to experience this remarkable, mesmerizing, and uniquely American artist. Asked recently after a performance at the De Young Museum in San Francisco whether he thought he was ready for Broadway, Holley answered, “I am Broadway.”