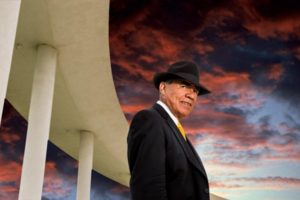 Texas native Ruben Ramos sits at the helm of a family musical legacy born more than over 80 years ago. The family musical legacy is firmly rooted in traditional Mexican artistry, then infused with the big-band sound of the 1940s, heavily influenced by blues and rock, and is now perched at the pinnacle of Tejano music. Ruben’s uncles created the band, then called The Serenaders (Los Serenateros), after WWI. They were interrupted when five of the brothers went to fight in WWII. When they returned, the band was revived as Justin Perez & His GIs and became a topnotch big-band orchestra. As time marched on, Ruben and his brothers and sister joined the family band and introduced R&B, cha-chas, cumbias, boleros and rancheras. Ruben formed what would be the next level of the family legacy and renamed it The Mexican Revolution in light of the 1970s’ Chicano and civil rights movements. Ruben earned his first Tejano Music Award in 1987 along with a new nickname, El Gato Negro (The Black Cat). In 1998, Ruben and the band were inducted into the Tejano Music Hall of Fame. Later that year, Ruben teamed with David Hildago and Cesar Rosas (of Los Lobos), rocker Joe Ely, country legend Freddy Fender, accordion master and living Tejano legend, Flaco Jimenez; and country crooner Rick Trevino to form Los Super Seven. Los Super Seven’s self-titled CD earned them a Grammy Award for Best Mexican American Performance at the 1999 Grammy Awards. That same year, Ruben Ramos & the Mexican Revolution received Best Male Vocalist and Video of the Year awards at the Tejano Music Awards. Ruben continues his family’s Tejano legacy with one of the hottest horn sections in Texas combined with Ruben’s distinct, sincere voice.