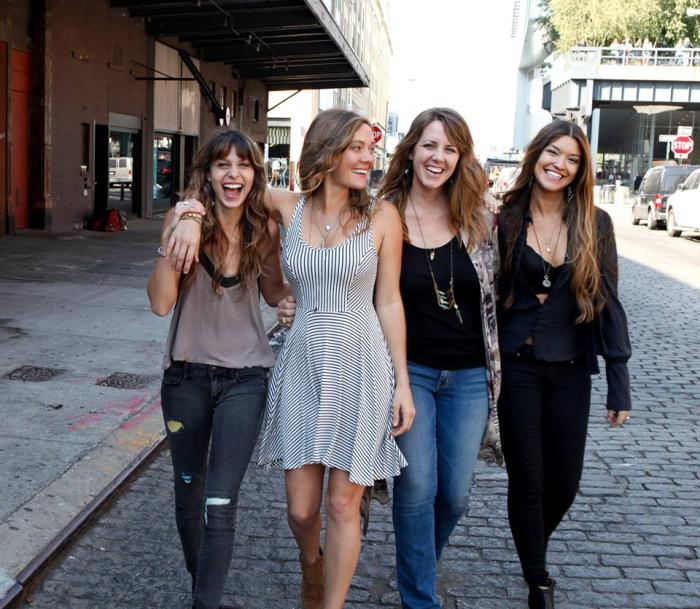 The four principal members of Austin’s The Trishas would have you believe that they’re not blood related. But a DNA test might be in order. True, their individual bios may support their claims of having all had separate lives before meeting each other; but to hear them sing together, you’d swear they were harmonizing from the womb.

Then again, sometimes luck and fate sing in perfect harmony, too, and uncontested magic just happens — just as it did the very first time Jamie Wilson, Kelley Mickwee, Liz Foster and Savannah Welch ever shared a stage together. It was ostensibly supposed to be a one-off gig — two songs as part of a tribute to Savannah’s father, famed songwriter Kevin Welch, at the 2009 MusicFest in Steamboat Springs, Colo. But midway through their first practice, it became clear to all in the room that they were on to something good. Goosebumps don’t lie.

“I remember we were at Kevin’s house, working up one of his songs — I think it was ‘Satan’s Paradise’ — when I first heard it,” Wilson recalls. “We were going over the song, figuring out our parts and everything, and we tried it and didn’t hit it, tried it again and didn’t hit it … until one time, finally, we actually got it, and I thought, ‘Cool!’ And then we worked up the whole song, and all of us were like, ‘You know, this is actually pretty good. We’re actually going to be pretty good — if we can pull this off.’”

By all accounts, they did indeed pull off “Satan’s Paradise” at the Welch tribute. But it was their gorgeous way with “Till I’m Too Old to Die Young” that really killed — and still does, on the rare occasions when they still perform it. “We only do it now at a certain kind of special gigs, if the mood feels right,” explains Savannah. Fortunately, they captured it perfectly in the studio for their self-released debut, They Call Us The Trishas. The five-song “mini album” (don’t call it an EP!) is the perfect calling card for the Trishas, distilling the essence of their full live show into a svelte 20 minutes that also proves they can write songs every bit as striking as their voices, as shown by the sterling originals “Give It Away,” “Rise Above” and “So Blue.”

They Call Us The Trishas was released to warm reviews and enthusiastic fan reaction in August 2010, after the group had already chased their successful MusicFest debut with nearly two solid years’ worth of buzz- and confidence-building shows. Most of those were in and around their home base of Austin (the self-styled “Live Music Capital of the World”), but there were also strategic forays throughout the rest of Texas and points beyond. It wasn’t long before they began nabbing plumb opening-act gigs with the likes of Dwight Yoakam, Raul Malo, Rodney Crowell, the Nitty Gritty Dirt Band and Todd Snider, as well as studio work singing on two of 2010’s most acclaimed Americana releases, Kevin Welch’s A Patch of Blue Sky and Ray Wylie Hubbard’s A. Enlightenment, B. Endarkenment (Hint: There Is No C). Hubbard also secured them a spot onstage singing backup for Joe Walsh at his 2011 Grit ’N Groove Festival in the Texas Hill Country.

As potent as they all are as a unit, it’s the combo plate of unique styles and personalities each Trisha brings to the table that makes the group truly, well, sing. “We all have different strengths,” says Liz, “and because of that we’ve been able to educate each other in a lot of different things. I think that’s what’s really connected us more and made us stronger, being able to feed off each other.”

To wit: Liz, with a background in Motown revues, stands out with her rafter-raising, gospel-mama boom of a voice and assertive harp. “Musically, Liz brings the Joe Cocker to the group — she’s the wailer,” says Jamie, who in turn leans more to the country/folk side of the fence and is the group’s primary guitarist. “Jamie’s our rock, because she’s the one who has been playing the longest and is the best and the strongest at it,” says Kelley. “Like, we can’t do a gig without her.” Kelley, born in Birmingham and raised in Memphis, brings a heaping helping of bluesy, southern soul to the mix — along with what Jamie calls “a very strong right hand” on mandolin that keeps the band in rhythmic step sans a bass player. And Savannah? “I bring the learning curve,” she offers. “I’m the rookie on deck.” The others share her laugh, but note that she also brings a certain je nais ce quoi “chill factor.” “I don’t know how to describe it, but Savannah’s got a really, really strong voice that has the most delicate little break in it,” observes Jamie. “There’s not really a classification for it, but it’s like the Patty Griffin thing, where there’s just a lot of movement.”

Jamie, a native of Sealy, Texas, cut her teeth playing in the alt-country band The Gougers, which recorded four albums over the course of seven years before she struck out on her own with a solo EP, 2008’s Dirty Blonde Hair. San Antonio-born Liz started performing in her teens, singing in various rock and soul cover bands before finding her own artistic voice in Liz and Lincoln, a promising but short-lived duo project with her ex, songwriter Lincoln Durham. Meanwhile, Kelley spent five years touring in a rootsy Americana duo, Jed and Kelley, with her ex, a stint that produced two albums. Savannah was born and raised in Nashville but spent her early adulthood marinating amongst the punks and rockers of Austin’s music scene. She sang backup in her brother Dustin’s rock band and dabbled in songwriting, but spent most of her time pursuing a career in film acting.

For now, though, Hollywood will just have to wait, because outside of immediate family — most notably, Jamie’s baby daughter, Joanie (already a road veteran) — The Trishas’ priority No. 1 is working toward the completion of their next album. In 2010, they were signed to a group publishing deal with Warner/Chappell Music in Nashville, and they’ve been diligently writing, stockpiling and rehearsing new songs while also fortifying and expanding their grassroots audience by touring more and more outside of Texas. And should the right record deal present itself along the way, well, they’ll weigh their options with savvy, road-hardened Trisha street smarts.

“We’re just trying really hard to not have to change anything about ourselves,” Kelley explains. “It’s real hard, but it can be done that way.”

“What matters is being able to respect the music that you make 20 years from now,” concludes Jamie, the others nodding in perfect Trisha harmony. “It’s more of a career thing than a go-be-a-star thing.”