Singing For God, For Joy, For Fellowship, For Home 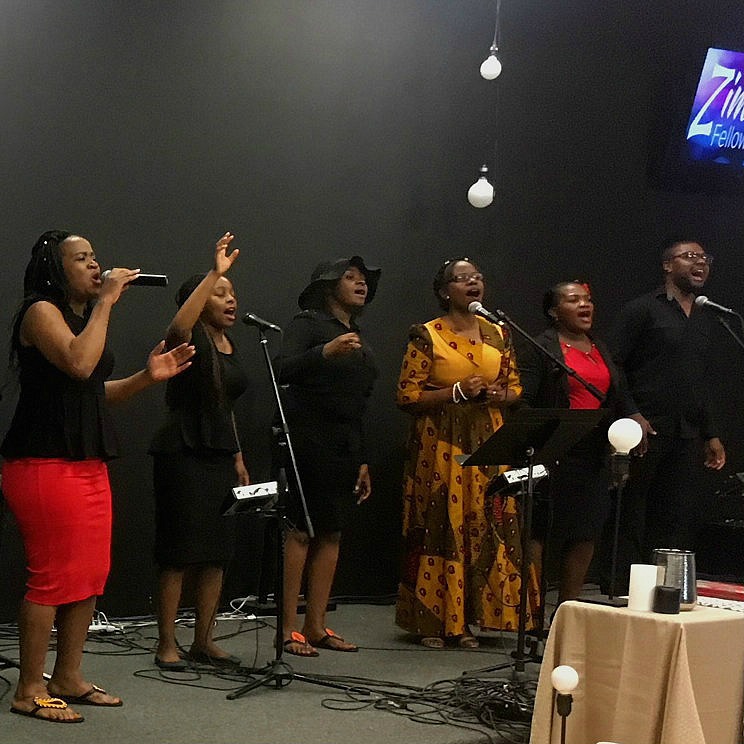 The Zimbabwe Fellowship was formed around a decade ago at Lovers Lane United Methodist Church. But the congregation's choir - the Praise Team - has existed for only four years, under the direction of Elisha Shamuyarira (playing drums offscreen in the video below). The choir can sing more conventional American gospel but they truly reach stratospheric levels singing in Shona, their home language, influenced by Afro-pop styles - and with Tsitsi Musabaeka as their tiny, powerhouse lead singer.

Welcome to the Art&Seek Artist Spotlight. Every Thursday, here and on KERA FM, we’ll explore the journeys of North Texas creatives. As it grows, this site, artandseek.org/spotlight, will eventually paint a collective portrait of our artistic community. Check out all the artists we’ve profiled.

But back amongst all those trees, it’s not simply a church; it’s an entire complex of chapels, a school, a gym, a coffeehouse, various offices and ministries. It offers everything from traditional services to contemporary Christian music that can include country-western or Michael Jackson, even a jazz band. There are also two choirs made entirely of African immigrants — one just of people from Zimbabwe.

Ngonidzaishe Mukarakate is associate pastor of the Zimbabwe Fellowship. It’s a tiny congregation, and we have to walk a while across the Lovers Lane campus to get to the Zimbabwean’s own chapel.

“The Zimbabwe Fellowship,” he explains, “was established about ten years ago. A group of immigrants loved to worship in their own cultural set-up. And this church has accommodated them.”

Their chapel’s about the size of a small nightclub. Mukarakate likes to joke that the Zimbabweans are upstairs here because when they worship, they make a lot of noise.

He’s wrong. They make awesome noise. The choir members sing in Shona, one of the two main languages in Zimbabwe, which is located in southeast Africa. In their music, what you hear is what happened, starting in the 1980s, when Methodist hymns met American gospel and several infectious Afro-pop styles (like sungura) that took over the entire continent. Hand-clapping, foot-stomping, falsetto trills and yips and a dance beat. A black American gospel choir can hit with the same exalting force, but these six Africans (plus keyboards and drums) fill this small chapel with a sound that makes you wonder how the doors stay on.

Growing up in Zimbabwe, choir members often sang only a capella – which may partly explain their vocal power. Choir member Anita Kudzai Mupingo recalls “I was in the choir in the sixth grade with my dad. I’ve always loved singing. Back home, we used to sing hymns and choral music, so it was different singing with drums and the keyboard and guitars. It’s different but I like it.”

“Our church,” he says, “is not much of a neighborhood church. It’s more of an attraction church. So they come from around the Dallas metroplex.”

Several choir members drive in all the way from north of McKinney. The choir director, Elisha Shamuyarira, comes in from Grand Prairie.

At Lovers Lane, this particular Sunday is special with the church’s main Sanctuary Choir singing from Handel’s ‘Messiah.’ The church is holding a confirmation service but it’s also commemorating the 20th anniversary of Stan Copeland taking over Lovers Lane as pastor. The large hall is filled with several hundred people, all from the church’s various congregations.

That’s why, during the service, another choir steps up. This is the Hearts of Africa Worship Team. They’re immigrants from different countries across North and Central Africa. And when they get going, something rare happens. White and black congregants, young and old, stand and clap and dance – to African music.

When the music and applause die down, Copeland remarks, “It’s taken us twenty years to get this congregation moving and clapping like that.”

Acknowledging the diverse gathering, Copeland explains this is simply the church’s mission statement in action.

“What I have learned is that when you say that you’re going to love all people into a relationship with Jesus Christ, then you’d better be ready for all the people that Christ is going to send you. Amen?”

“Amen,” the crowd affirms. Otherwise, Copeland says, you’d better come up with a different definition for “all” or for “Christian.”

Anita Mupingo from the Zimbabwe choir says that “back home, most of us are Christian and most of us are black. We don’t really have that much diversity. Whereas here, there’s people from Nigeria, Liberia, people from East Texas, Atlanta, Alabama and then people from Zimbabwe, so that’s one of the unique things about this church. It opens up my mind.”

Mupingo is in North Texas working to get a master’s in social work. Elisha Shamuyarira, the choir director, came here as a professional musician in 2009 with his wife and son. Back then, Robert Mugabe was still dictator in Zimbabwe.

“We were not agreeing with what was going on, you know,” Shamuyarira, says, “so we saw that it was getting dangerous for us. So we just decided to stay here.”

Mugabe was finally ousted – but only last year, after three decades in power.

So here, to North Texas, the Zimbabweans brought their faith and their music. And found something more.

“My mom, my dad and my brother – they’re back home,” says Mopingo. “But my church has become my family, too.”

The Book of Isaiah commands the faithful to raise their voices in praise of God. They sing of joy, of fellowship and family.

And sometimes, their singing can also sound like home.