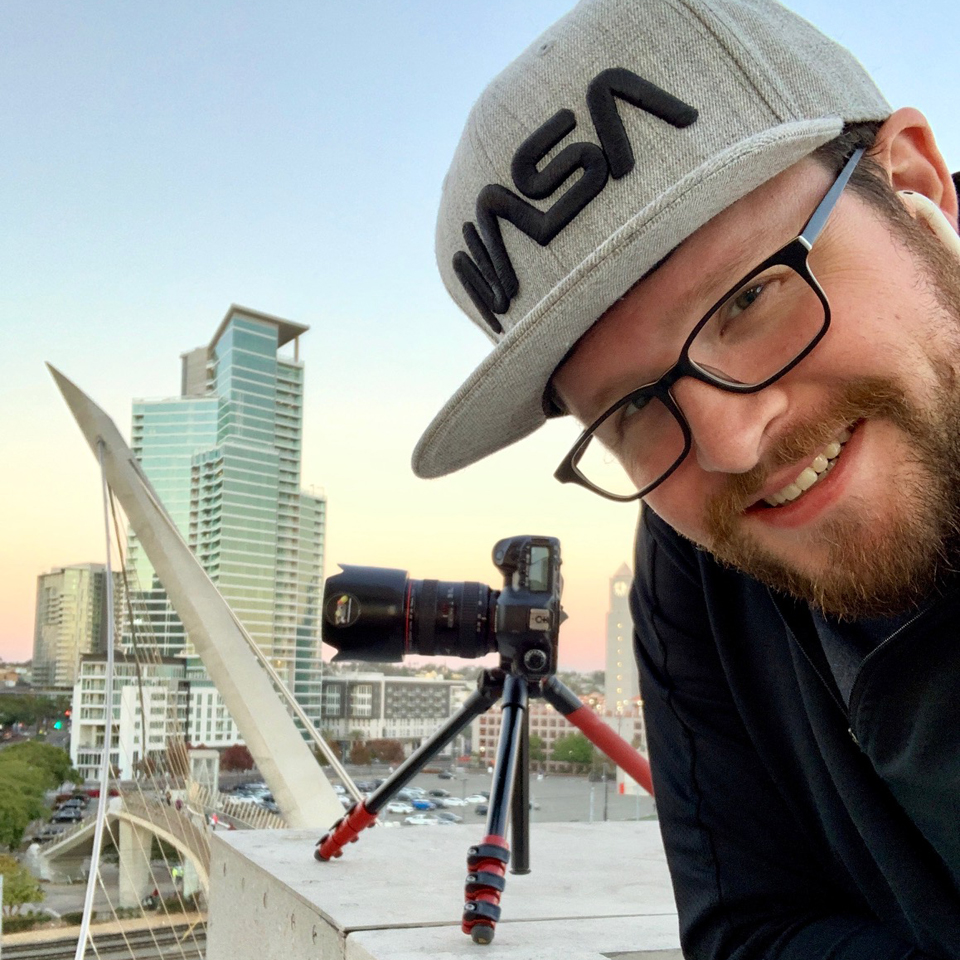 A professional time-lapse photographer, Jordan Mathis spends hours to plan and craft a few seconds of beautiful video. He travels the world and uses sophisticated motion-control technology to condense the mundane movements of people, clouds, stars and waves into glowing jewels of light and shadow.

Almost anyone can make a time-lapse video with a smartphone. But to master that art, you need technical know-how, patience, timing, and luck. In today’s Art&Seek Spotlight, producer Dane Walters and reporter Jerome Weeks meet a Fort Worth visual artist who’s made time-lapses his life’s passion

On a bright and sunny day, videographer Jordan Mathis sets up up for a shot at Fort Worth Water Gardens. His eight-foot-long, motion-controlled camera-tracking system sits precariously on a high ledge and extends out over the cascading water. His rig costs thousands of dollars, and it looks like it could teeter over at any moment. He shouts over the sound of the rushing water.

“I still kinda want the tilt to be the same,” Mathis says. “The problem is, my pan is off.”

“Yeah, that’s cool. I like what I’m looking at, I’m gonna turn this real-time move into a time lapse.”

His goal today: to capture the setting sun, and the visitors as they explore all the ledges and waterfalls in the sunken fountain.

“I love time lapse. It allows you to see, maybe a cityscape that you’ve seen a hundred times, it lets you see it new again,” he says. “There’s all these different elements about nature and people, that when you just speed it up, something magical happens.

Mathis, whose Instagram handle is @timelapsejunkie, graduated in 2008 with a film degree from SMU. He got started with commercial film and photography. In 2014, he decided to specialize in time-lapse and motion-control photography. He’s worked for some big-name clients: HBO, BBC, MTV, NFL films.

To make his mesmerizing time-lapses, Mathis uses a camera system developed in North Texas by a company called camBLOCK. The system lets him program complicated moves, right on location, using a tablet.

“It’s hard. It takes a lot of planning, a lot of prep and you have to problem-solve ahead of time,” he says.

Once he’s set it up, the camera pans, tilts and glides around the track. He captures complex moving shots, as the sun recedes, and the Milky Way pivots into the night sky. On another shoot, his camera twists and rotates, seeming to float through the steel supports on Fort Worth’s 7th Street Bridge. These shots can take hours to plan, hours to capture. Mathis has to consider how people, cars, the scenery, and the sunlight – all will change over that entire time.

“So I have to look at the landscape and say ‘here,’ set up and start rolling. You have to think about where traffic is going to move, where people are going to move, this is gonna work, there’s a light over there, it’s going to turn on in three hours, it’s gonna cast a shadow here, that’s not gonna work,” he says. “And that trains you into making decisions quickly.”

Mathis travels to capture these kinds of shots: Seattle, San Francisco, Chicago, New York. In a matter of seconds in his videos, clouds seem to tumble across skies, anywhere from New Mexico to Guatemala. A single time-lapse can require thousands of still photos. Mathis sets up several cameras at each shoot to catch multiple angles. Then he spends hours combining the time lapses into videos he features on Instagram, and his Vimeo channel.

“Sometimes when I go out and shoot a project, I’ll shoot two terabytes of footage. The fifty, sixty thousand stills and process it into time lapse, throw it in a timeline, trim it out, figure out what the best representations of each of those ideas are, and I’ve got sixty seconds of footage. Out of all that. But that’s where the magic is,” he says. “It can’t just sit on a hard drive and be magic. It’s in the edit. It’s in the distillation. It’s in that exhibition.”

The community of time-lapse photographers is small. Sometimes, Mathis meets up with others around the country for multi-day shoots. Sometimes, he works with an assistant. Usually, he works alone.

“Passing the time when you’re time-lapsing can be boring. You spend a lot of time with yourself, and podcasts, audiobooks, huge fan of those. Thank you, podcasters. You save my life.”

Adapted for web by Felix Kalvesmaki.

How has being in North Texas affected your art?

When did you first call yourself an artist?

A lot of people take the term artist, and they put it way up here, and they make it this lofty thing that’s almost unattainable. I think that’s wrong. I think anyone can be an artist. I think everyone has art in their heart. If you didn’t then you couldn’t appreciate art. There was a while when I was uncomfortable calling myself an artist. Oh no, that’s not me; I just do this thing right here.

I think there was definitely a time when I was working when I was out on the street with my large format camera shooting and then working with my photo professor who trained with Ansell Adams, and I was like, Oh, I’m an artist. I look back at that and I think that’s not what made me an artist. I think that’s silly, I think that anyone can be an artist. I think that everyone is attracted to art, and art is a conversation. it’s not an “ism” or a “tiest.” It’s a conversation between people. It’s taking something that I see in the world, distill it into something else, and then giving it to someone else. Art is transmuting an experience and it’s me seeing something out in the chaos of the world, trying to distill it, and have someone else have that same experience when looking at that distilled conversation. Anybody can do that, anybody can capture what’s out in the world, add their perspective and then send it back out, and just hope that it translates.

What have you had to give up to pursue your passion?

I’m trying to think of something I’ve had to give up… And it’s not really a way I like to frame my thoughts; I think I’ve only gained. I mean I could say that I don’t have a stable job, I don’t have my health insurance covered by a nice big fancy company, I don’t work a 9-5, and then I’m done at the end of the day. I think those are things that I’ve given up, but I’ve gladly given up some of them, and every once in a while, it would be nice to just have a steady paycheck, and not have to navigate all these interesting new scenarios and track down clients to get paid, those are all things that can be frustrating about my work, but I don’t think I’ve had to give up anything to do what I do, I think it’s been just all blessings, all gaining. It doesn’t mean it isn’t hard, It doesn’t mean I haven’t had failures, and that things don’t go bad, but that is going to happen no matter where you are, and you’re silly if you think that is going away at a 9-5.

Why did you decide to specialize in time-lapse?