The Talk Show Host And The Goblin 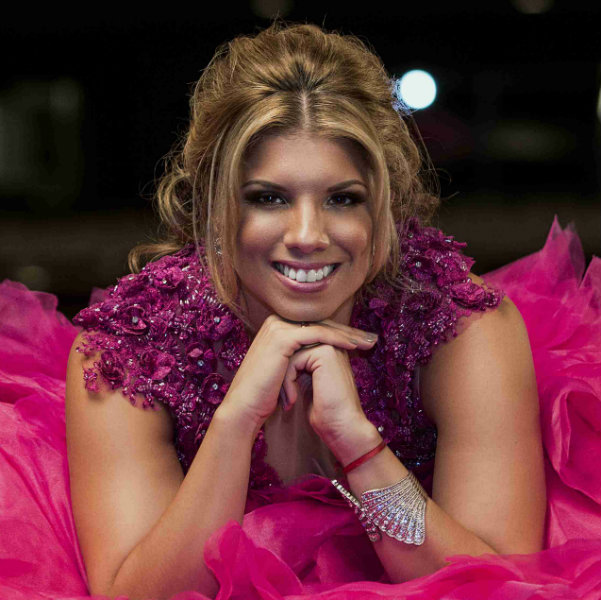 Gaby Natale has become an aspirational model for Latinas: She had to climb out of the Argentine economic wreck. Then, when she and her husband created her talk show, 'SuperLatina' in Texas, they had to save it from the American economic wreck of 2008.  Since then, she's moved her studio to Fort Worth, got national syndication, won 3 daytime Emmys and published a best-selling book. Oh yeah, she's also playing a goblin. In an opera. A totally surreal tango opera called 'Maria de Buenos Aires.'

Fort Worth Opera is rehearsing ‘Maria de Buenos Aires’ in the basement community room of La Gran Plaza, the sprawling, Latino-themed mall in South Fort Worth. The opera is by legendary tango composer Astor Piazzolla. It’s an hallucination of an opera about a prostitute seduced by the tango. In dense, surreal poetry by librettist-lyricist Horacia Ferrer, Maria dies, then gives birth. She goes to hell, which happens to be Buenos Aires at night. And she’s led around by a duende – a goblin.

A goblin played by Gaby Natale.

“I didn’t look for this opportunity,” Natale says. “it came my way. But sometimes I plan, and life surprises me.”

Natale’s presence here is surprising because she’s the host of ‘SuperLatina,‘ her syndicated talk show which has won three Daytime Emmys for Spanish-language programs. The goblin Natale plays is a speaking role, so it’s not testing the TV host’s singing chops. But it’s the first time the 39-year-old has acted professionally, the first time she’s performed in an opera — and in a role that was originally created by librettist Ferrer for himself.

Imagine Kelly Ripa or Terri Gross appearing in ‘The Marriage of Figaro.’  This is not Natale’s typical public appearance. Those are often at conferences delivering inspirational talks. Which is why she decided, OK, let’s do this.

“We need to step out of our comfort zones,” she says, “because it’s part of that philosophy of not setting your own limits.”

Natale was cast because the director-choreographer John de los Santos decided the role in this unconventional opera should be non-traditional.  Three companies — Fort Worth, San Diego and Arizona — were programming ‘Maria’ and de Los Santos was hired to develop a new production of ‘Maria.’ The duende, the goblin, is a shape-shifter who appears as a bishop, a woman, a drunken poet, so de los Santos thought, this time, he’d cast a woman — one with fire, he says.

Natale was suggested by FWOpera marketing director Paulina Magadaleno. De Los Santos talked to the host on the phone for an hour, he says, and decided, sight unseen, she’d be perfect for the goblin.

“Because I think she will stop at nothing to achieve her goals,” the director says. “You give her a target, and she’s going to hit it right in the center, if she sets her mind to it. So she has this drive and insuppressability.”

Besides – “this is her heritage. So much of it is ringing true to her.”

In fact, Natale grew up in Argentina, in the town La Plata — pretty much the birthplace of the tango — but then she moved to the big city, Buenos Aires..

“I used to live in an avenue called Avenida Corrientes. It’s famous because of the bookstores and theaters, and so when you walk in Avenida Corrientes, many times what you hear is tango. And so it’s the soundtrack of many years of my life. I love tango.”

The tango itself also started in the outskirts of Buenos Aires as a knife-fighting, macho ballad, the milonga, and then slowly was civilized and taken over by Buenos Aires to become the signature musical rhythm of Argentina (some, like Jorge Luis Borges, believe it was sadly ‘softened.’ Borges was defiantly old school). But despite its international reputation for jazzy speed and sexiness, the tango is often like American blues or country music. There’s often a melancholy to it, a longing for the past or a lost love.

Says Natale: “The lyrics of tango are always the macho who was abandoned and is crying because the good old times are gone or the woman left you. In a way, it’s a little bit whiny, the tango,” she adds with a laugh.

In Buenos Aires, Natale earned a bachelor’s in international affairs and then graduated with a master’s in journalism in 2001 – just when the Argentine economy nearly collapsed. She took a lowly job handing out flyers – but that led to work in PR in Washington. And that led to journalism with Univision in Mexico and West Texas.

This is where the Natale success story really begins. She and her husband Andres Saurez began producing their own show, SuperLatina, for a single TV station in Midland-Odessa. Their studio? A carpet warehouse. Which they didn’t even have the full use of. Their set had to be able to be pushed out of the way.

“We started in this carpet warehouse and I painted the set with my own hands,” Natale says “And all my professional story is knocking on doors and being told no, knocking again and again. But that’s why we called it ‘SuperLatina’ because it appeals to our inner superhero, the best part of us. And that’s what we wanted to instill in people.”

It would take Natale and her husband seven years to get SuperLatina syndicated nationally – often selling it station by station — partly because the 2008 recession nearly killed their plans. It was another seven years before the little show won its first daytime Emmy against the networks Univision and Telemundo.  Now, Natale even has a best-selling book, ‘El Virtuoso Circulo’ (‘The Virtuous Circle’), a collection of interviews — ” with headliners, fascinating people. And always it’s their road to success.”

In all of this, Natale herself is not just the star, the face outfront  Rare for a daytime talent, she’s the show’s producer. She and her husband also own Aganar Media, the marketing company that promotes the show and the brands it touts.  And she’s the chief product. People didn’t tune in to Oprah for the guests: It was her own story, her own hard-won presence. Natale has become much the same thing to a growing Latina market. Her success offers an aspirational image, a model of persistence, hard work  — and staying open to whatever life offers.

“I think it’s so important because our possibilities expand so much when we do that,” Natale says. She cites the fact she hadn’t really planned on writing a book until one day, after a talk she gave, an agent she didn’t know told her she already had a book in the works, really. All she needed was some guidance and some representation.

It was, Natale says, kind of like what happened with ‘Maria.’ She got a call and an offer. She thought it over, asked herself, when would another chance come along to perform onstage in an opera with a company of this caliber and with material so close to home?

And who knows what else this performance might lead to?

It’s like that old saying. When life gives you goblins …