Art&Seek has been following Riley Holloway's career for five years. And recently, the painter has made some changes to his practice and his career. We learn about hit newest trajectory. 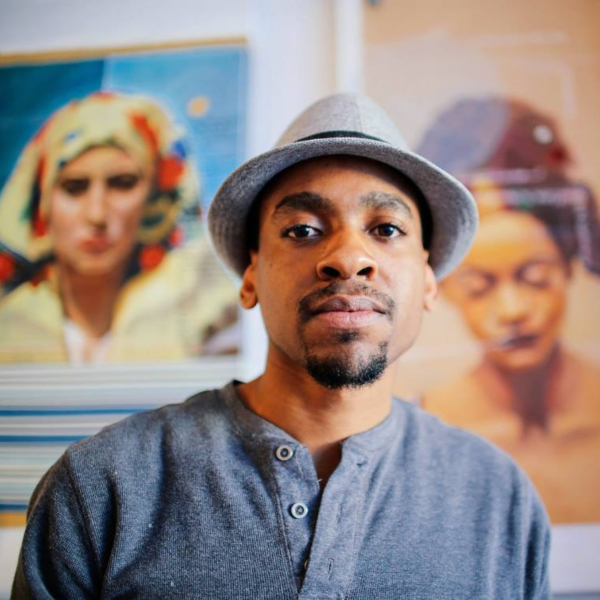 Riley Holloway is a 29-year-old multimedia artist who primarily works with oil paints, pens, and chalk. In the past, his work had mostly consisted of large-scale portraits painted on six-foot-tall self-built panels. Now, he's making smaller works, building sculptures and finding new ways to express his artwork. Holloway has spent time in Italy studying portrait painting at the Florence Academy of Art. He was Artist in Residence at The Fairmont Dallas. And he's shown work at Art Basel in Miami.

The Plano-based painter Riley Holloway is making headlines. Hip-hop producer Swizz-Beatz bought one of his paintings for his collection, which includes works by photographer Ansel Adams and pop artist KAWS.

Art&Seek’s been following Holloway’s career for nearly five years (video). In this week’s Spotlight, we look at the artist’s newest phase.

Nearly two years ago, things seemed to be going really well for Riley Holloway. His wife was about to give birth to their second child, he was prepping works for Art Basel, the splashy art fair in Miami. And he got raves for the 27 paintings in his first solo show.

Even so, the paintings weren’t selling…

“We sold one,” Holloway told Art&Seek. “And I remember that very specifically because I was like, ‘Is that a success or a failure or what?”

Those pieces from Holloway’s first exhibition were large-scale oil paintings. And all of them were portraits of people of color.

“So for that first show, you know, visually, his palette was limited,” says Lauren Childs, owner of Fort Works Art. That’s where’ Holloway’s first solo show was on view. “He was dealing primarily with the people he knew and his surroundings.”

Before Holloway’s solo show, Childs had been working with him for a couple years. She’d invited him to show at a few pop-ups that she curated and she was enamored with his talents.

“I remember when I first saw two of his paintings it was at Artspace 111,” she recalls. “He had been in a juried competition. And I walked in and they looked like paintings of a 40-year-old man. And then I found out who it was, and I think at the time he was 24 or 25, and it was just insane to me that someone so young was creating portrait work like that.”

Childs saw Holloway’s potential, so she signed him and began representing him. Holloway says that was huge. But something changed afterward, and he didn’t like it.

“I just felt like while I was signed, I kind of got in this weird complacency,” says Holloway. “Like I wasn’t working as hard as I normally would have and something just felt like it was missing.”

Holloway says he was undisciplined. He wasn’t treating his career like a business. And his wife noticed it.

“My wife was like, ‘Look you can quit your job. You can do this full-time. But you gotta actually do it. I’m talking Monday through Friday. Set hours and actually do it.’ And I was like, ‘Yes ma’am,’” he says.

Holloway’s wife, Kelsey, sold her own business and started working exclusively with Riley. She revamped his website, took over social media and sold most of the unsold works from that first solo show. Now the couple works together under the moniker, Holloway Fine Art.

Again, Lauren Childs: “His wife is basically his business manager. They do other shows, they represent other artists. Together they work and this is what they do. They support themselves and that was not happening two years ago. So that’s very very exciting.”

Holloway’s no longer represented by Fort Works Art. But he has a great relationship with the gallery. They’re hosting his latest solo exhibition. It’s called “Spectrum” and Childs says it’s Holloway’s most impressive and varied work so far.

“He felt like every piece was unique,” she says. “And he wanted them each to represent something new, an experimentation.”

Visually, “Spectrum” is more confident, more accomplished than Holloway’s first exhibition. People are still center stage, but their torsos and hands are more expressive. And the portraits’ backgrounds are more imaginative too. He’s opting for brighter colors and floral designs.

“This time it was like, ‘Well, I don’t want this just to have a white background. I can be more creative than that,’” says Holloway.

He also felt more confident about coming back to pieces. He says he was willing to sit with them for a longer period of time. “Before, I had a habit of not wanting to go back and touch paintings,” he says. “But now it’s like, ‘No. There’s more I can do to that.’ And you just have more of a confidence in what you’re doing. I think that just came with repetition.”

A lot has changed in the past two years for Riley Holloway. From how he works to who he works with and even where he works. He recently moved into a new co-working space for artists called Cedars Union. And his wife Kelsi has a desk in the space. It’s a bonafide family business. And once again, the Holloways’ future looks bright.

Art&Seek produced a video with Riley Holloway in 2016 and he told us about his creative process. Check it out below:

In 2013, Riley Holloway became the Artist in Residence at the Fairmont Hotel in Dallas. He gave us a tour of the new studio and told us what it meant to his career. Check out the video below: