Monumental And Personal And Here 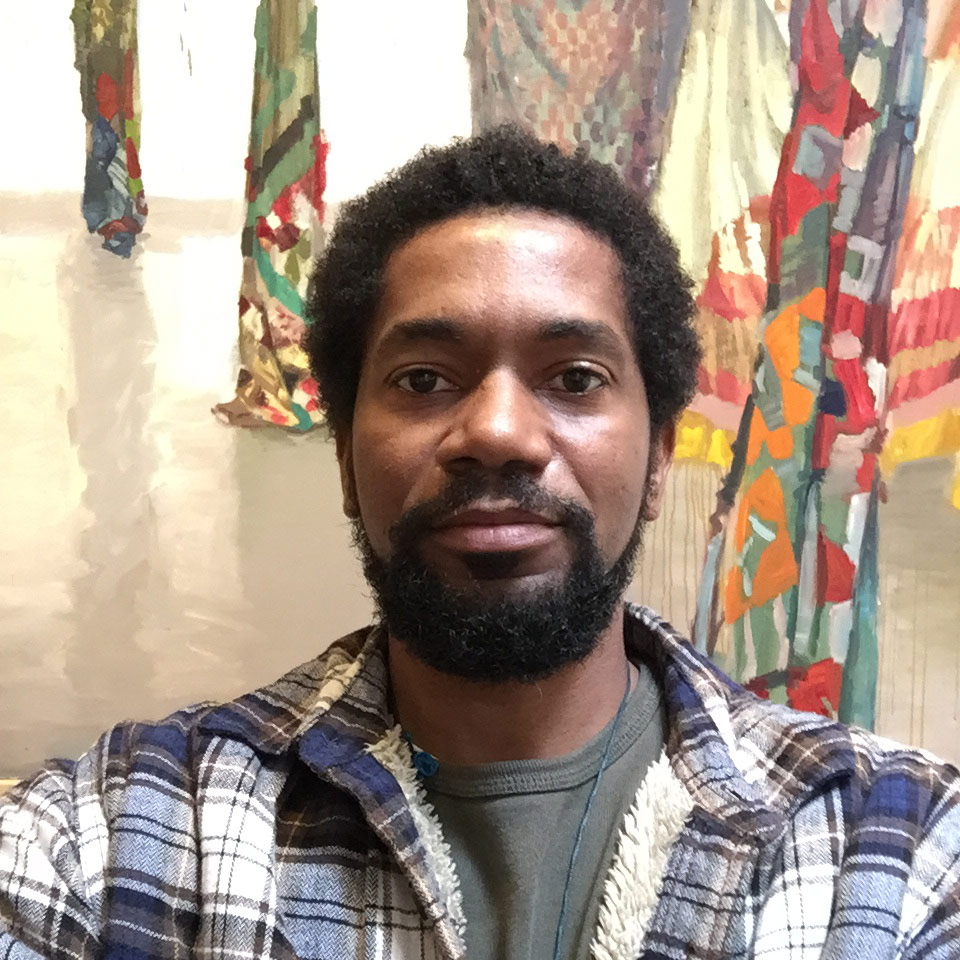 His artworks hang in major museums, he was educated on the East Coast and in Europe. But Sedrick Huckaby still lives in Fort Worth and his subjects are still his own family, their quilts, their African-American neighborhood. He turns these subjects into canvases of such density, color and human detail, it's like he's compressing entire histories into paint.

Welcome to the Art&Seek Artist Spotlight. Every Thursday, here and on KERA FM, we’ll explore the personal journey of a different North Texas creative.  As it grows, this site, artandseek.org/spotlight, should eventually paint a collective portrait of our artistic community. Follow the Spotlight, enjoy and let us know what you think in the comments section below.

Sedrick Huckaby paints portraits of people, often his own family members. And for more than a decade now, many of the portraits he’s painted happen to be of quilts. Old-fashioned, family-sewn quilts, the kind made from bright scraps and strips of color, whatever fabric leftovers were at hand.

See Sedrick Huckaby’s series of lithographs, ‘The 99%,’ part of the ‘Identity’ exhibition at the Amon Carter Museum through Oct. 9th

Even before Huckaby went to Yale University in 1999, he’d been fascinated by his family’s quilts. They appeared as details or backgrounds in his paintings. But at Yale, Huckaby took a course on African aesthetics and how African traditions spread around the world — including the idea of making-do, of re-purposing what was at hand, transforming bits and pieces into something new. That made him think these distinctive quilts could be a stand-in for a person; they embody his or her character, an abstract portrait in patterned fabrics yet an abstraction that was individual, personal, vivid with history.

Huckaby’s quilt paintings have become a trademark. One of his large, quilt paintings hung in the lobby of the Amon Carter Museum. Another quilt study is in the Museum of Fine Arts, Boston. Other paintings of his have been bought by the Art Institute of Chicago and the Whitney Museum in New York.

But even though he was educated at Yale and in Europe, and his artworks hang in major museums, Huckaby came back to Fort Worth. That’s where he was born and where he still lives with his wife, the artist Letitia Huckaby, and their children. He currently teaches at UT-Arlington. And many of Huckaby’s subjects – the people, the quilts, the rooms – remain very much from Fort Worth as well. In particular, his images come from the city’s black, southside neighborhoods, where he grew up, where he attended O. D. Wyatt High School.

Huckaby came back here, he says, because what he paints are his family and his African-American heritage. “Literally,” he says, “my subject was here.”

In fact, one of Huckaby’s chief subjects has been his late maternal grandmother, who made the quilts. Hallie Beatrice Carpenter was such an important figure, he painted an entire series of portraits of her, a series called ‘Big Momma’s House.’

Gaile Robinson, the former art critic of the ‘Fort Worth Star Telegram,’ says, “I remember the first time I saw ‘Big Momma’s House.’ The paintings were so strong, they felt like Francis Bacon’s paintings of the popes. They don’t have the darkness Bacon does, but there’s that same sense of power, of conveying this tremendous personal force.”

All portraits are, in effect, paint made flesh. But Robinson says, in the way Huckaby uses colors, the way he layers his oil paints so densely, it’s a case of paint made flesh and also made sculptural: “I’ve never wanted to touch a painting so much as I’ve wanted to touch Sedrick’s. They are so thick, so beautifully painted, so gloriously rich and textural.”

At Valley House Gallery in Dallas, Sedrick Huckaby stands in front of portraits of his children, his wife Letitia and himself. All photos: Dane Walters

When did you first call yourself or consider yourself a real artist, a practicing professional?

When you call yourself an artist, surely, you’re saying, ‘Now, I’m an artist.’ And that probably happened in high school. But even younger than that, I really loved making art and I felt like that I would do something with art, I just didn’t know what. So maybe I considered myself an artist then, but I didn’t call myself necessarily an artist.

Who were the teachers who most influenced you?

Ron Tomlinson and Jack Barnett, they gave me a love for painting. And through them, through their mentorship, I just learned a deep respect for figurative art, really.

What have you given up to be an artist?

You know, I don’t go to as many social functions as the rest of the world. I don’t have as much time with friends as I would like to have. So I’ve had to give up a more robust social life.

You’ve painted lots of portraits, not just of your relatives but an entire series of small lithographs of everyday African-Americans for the Amon Carter Museum. But lately, your portraits have gotten monumental – even wall-sized. Why?

I started doing large-scale portraits when I wanted to aggrandize the ordinary person or the family members who weren’t celebrities by any means, weren’t known to a wide array of people. But it was a way of monumentalizing the ordinary person. Ordinary people matter.

Do you have to work on your art? Is it something you look forward to? Or is it a struggle?

The detail of Letitia Huckaby’s mouth shows the thickness of her husband’s impasto and the way he mounds colors on top of colors.