Racism, Discrimination and Punk Rock: Alejandro Escovedo Chats About His Experience in Music

The Texas Music Legend visited KXT Studios to perform songs off of his album "The Crossing." While he was in the studio, he talked about punk rock's early days, dealing with discrimination and his eternal search for the heart of rock-n-roll. 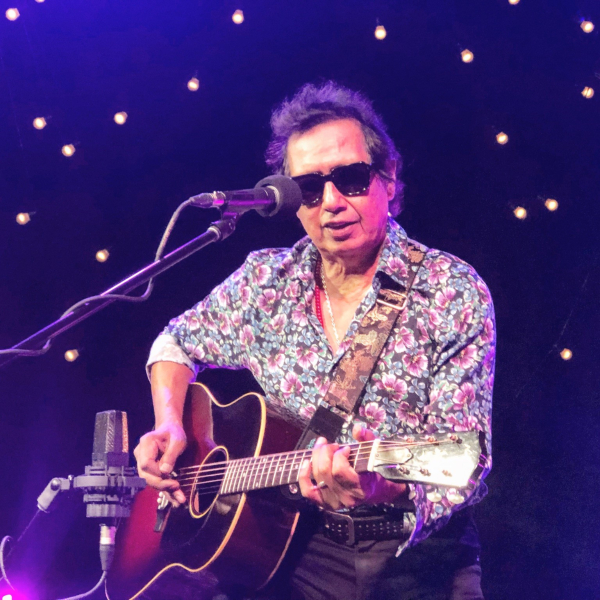 Alejandro Escovedo has had a long career in the Texas music scene. His work has traversed genres from punk rock to Latino music and Americana. And throughout his career the 68-year-old, Mexican American singer-songwriter has used his music to speak out about politics and societal issues. His latest album "The Crossing" continues the tradition with songs about the migrant experience and border politics.

Texas music legend Alejandro Escovedo is currently in the middle of an international tour for his album, “The Crossing.” In it, Escovedo weaves together personal narratives with imagined scenarios that reflect the experiences of migrants who’ve crossed the southern border. NPR Music’s Felix Contreras calls it “a power collection of songs that may, in fact, be the most succinct statement of Alejandro Escovedo’s musical and personal story.”

Want to listen to songs off of Alejandro Escovedo’s “The Crossing?” He performed in the studio at KXT 91.7 FM. And you see the performances here.

Escovedo recently dropped by our sister station, KXT 91.7 FM, to perform a few tracks. While he was in the building, he chatted with KXT’s Dave Emmert. The two discussed punk rock’s early days, the discrimination Escovedo dealt with as a Latino and so much more. Check out highlights from the interview in the text below or by listening to the feature in the audio player above.

Alejandro Escovedo’s trailblazing career began in 1975. He started out as a member of two pioneering punk rock groups: The Nuns and Rank and File. And Escovedo says the beginning was largely positive.

“You know, for us, we were kind of like the first wave of punk rock. So we really didn’t know what it was,” he says. “I mean, The Nuns I would never call a “punk rock” band. But we were embraced by punk rock because punk rock at the time had no borders. It didn’t have, like you had to be skate punk or punk funk or whatever.”

Escovedo says all sorts of people and ideas were welcome. “In the early days of punk rock, it was very well integrated with women, African Americans and Chicanos. It was all about expression really. You know? So in a way it was very similar to what the ’60s movement was like, in that if you had something to say and you felt compelled to say it, there were listeners.”

But outside that scene, where mainstream rock-n-roll lived, well, Escovedo says that world wasn’t nearly as inviting.

“You have to remember that at that time in America, radio was very, very close minded about rock-n-roll,” explains Escovedo. “So there was radio stations that would say, “We can’t even pronounce his name. How do you expect us to play his music?” One radio station said, “We have one Mexican band. We don’t need another one.””

And that attitude followed Escovedo throughout his career. “My records were never in the rock-n-roll section in record stores,” he says. “They were always in World Music or Mexican Music, World Beat or whatever. You know. Anything but Rock-n-Roll.”

Escovedo also faced discrimination on the road, “There were instances where I was refused entry into the front door of a gig that I was headlining, because they wouldn’t believe that I was in the band,” he says. “They asked me to go into the kitchen door. And there were instances in Lubbock, Texas where a bunch of frat boys [asked me] to serve them beer, cause they thought I was the bartender. Of course.”

Regardless, Escovedo pushed through. And he pushed himself musically. “The Crossing”  is his 16th solo record. It’s a concept album that centers on two teenage migrants and their search for the America they’ve heard about in songs and poetry.

“These are kids who love punk rock. They love everything that led to punk rock. They also love beat poetry and free literature of the ’60s and they love the American directors of the ’70s,” Escovedo says.

For the album, Escovedo and his collaborators drove across the state of Texas. Along the way, they spoke with migrants about their experiences. And Escovedo, who’s also the son of immigrants, searched within himself to sprinkle personal references through his songs. The end result? A politically charged record that’s just as raucous as anything he made in punk rock’s early days.

“There’s a song called “SonicaUSA,” Esocvedo explains, “and it says ‘I saw The Zeros –’ which was my brother’s band, right. Which was four young Chicanos from San Diego. And the character Diego says, ‘I saw The Zeros and they look like me. This is the America I wanna be.’”

“The Crossing” isn’t an autobiography or a manifesto. It’s a cinematic and timely story that shines a light on race relations, idealism and representation. Issues the 68-year-old Escovedo has been singing about since he started out.