The Effect The NEA Has Had On One North Texan

The NEA appears to have sidestepped defunding. So we talked to a local recipient about how the grant has affected his art. 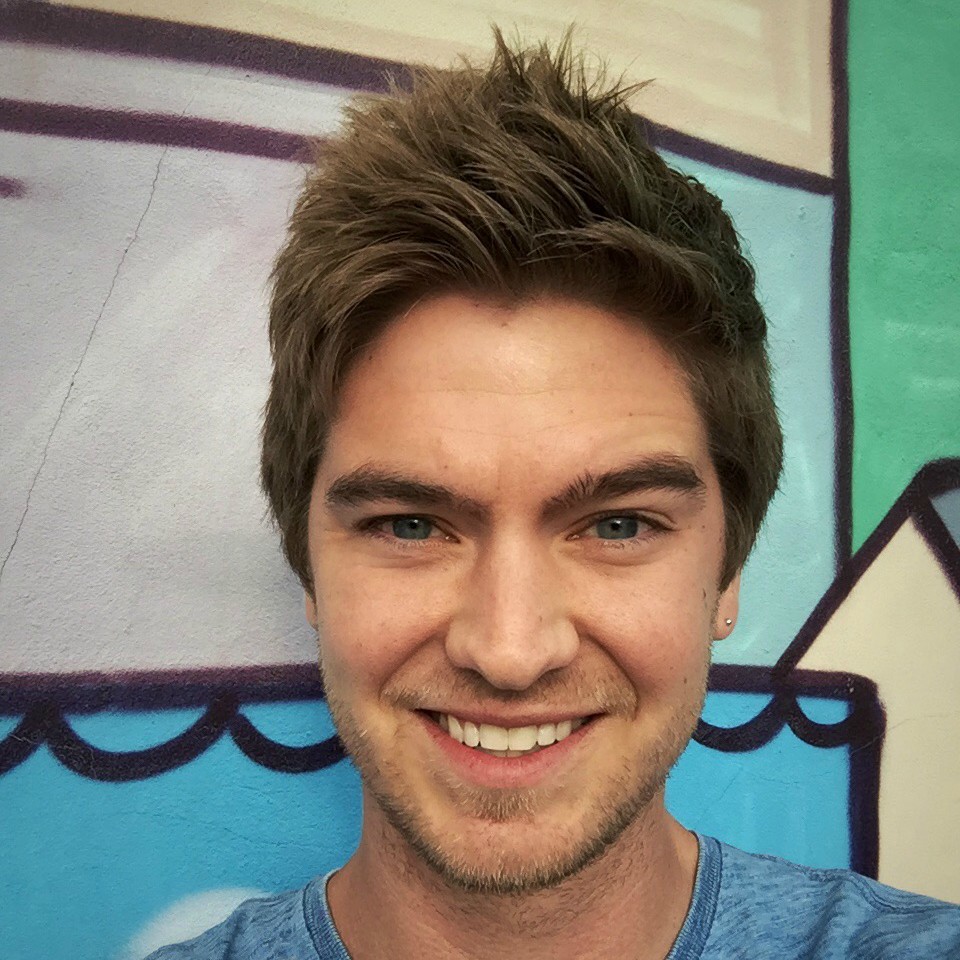 Matt Morton is a Robert B. Toulouse Doctoral Fellow in English at the University of North Texas, and an associate editor for "32 Poems" magazine. Morton holds degrees from the University of Texas at Austin and the Johns Hopkins University Writing Seminars (MFA). He's a 2017 National Endowment for the Arts Creative Writing Fellow, and he is currently working on two manuscripts. He was born and raised in Rockwall.

When Denton poet Matt Morton first received the call telling him that he had won a Creative Writing Fellowship from the National Endowment of the Arts, he didn’t know what to think.

“Part of the challenge was figuring out what it meant,” says Morton. “Did this mean that my career is made? Did this mean maybe nothing at all and it was totally arbitrary?”

The 29 year-old, blonde-haired, blue-eyed native North Texan says he took the honor as proof that the work he had been creating was worthwhile.

“The award meant that there were people out there who thought that what I might write in the future was worth supporting and investing in,” Morton says.

That reinforcement puts Morton, who’s getting a PhD in creative writing at the University of North Texas, in a pretty remarkable situation says Corey Marks.

“It can allow people to focus on their art for a period of time,” Marks says. “It protects them, so that writing becomes the main thing that they’re interested in.”

Marks knows from experience. He’s the Director of Creative Writing at UNT. And he, too, was an NEA Fellow. He says even if you’re like him and you get to talk about writing every single day, that life will continually pull you away from your own writing. The $25,000 that’s awarded to NEA fellows helps you focus. It makes art happen.

“I think art is one of the important things that comes from our culture and I think poetry in particular is essential,” says Marks.

The player below has audio of Matt Morton reading a poem from his second book of poetry. The poem is titled “Republic.” Click here to read “Republic.”

Morton grew up in Rockwall. He’s the son of newspaper editors. And he says that he was raised in a house that was really interested in language.

“I often heard conversations about what it was like to edit or write,” recalls Morton. “And so thinking about how words work was something that was part of my consciousness early on.”

Morton’s parents say he started reading around age three. He was the sort of kid that brought books to restaurants. But he thought he’d be a novelist, not a poet.

“I tended to write stories where characters didn’t do a whole lot, but thought a lot. So my stories had a lot of description, meditation, but they didn’t have much tension. They didn’t have that plot that made a reader hooked,” he says.

During college at the University of Texas at Austin, a professor encouraged him to give poetry a go. So he did. Now he loves it. But even though it’s his passion, he understands why some people have issues with the government funding the arts.

He thinks about the NEA fellowship like this: “It would be like funding medical research. You’re not exactly sure if anything is going to come of a particular study, but you’re giving them the opportunity to discover something.”

The opportunity for discovery is rare, but Morton has been trying to make the most of it.

He completed his first book of poetry right before he received the NEA fellowship. The poems were about his family, his insecurities and even about dealing with mental illness. Since then, he’s almost completed a second manuscript. And this time round, he says his audience is more front of mind.

“I think my poems have become less self-conscious and affected the more that I’ve acknowledged that I do care about a reader’s response,” he says. “And I’ve started to think more about, you know, what would be interesting for other people and not just for me.”

Morton hopes to write poetry that investigates life’s bigger questions like what it means to long for something you’ve never had. He says that if he’s going to be worth the NEA’s investment, he’s got to get away from simply looking inwards and explore what makes people happy and what makes them hurt.

Matt Morton says the NEA Grant will allow him to have some stability in his life and gives his work a stamp of approval. Photo: Lesya Bazylewicz

How does North Texas affect your writing?

You know, a lot of the poems that I wrote when I moved to Baltimore started to look at what it meant to be a Texan. This is weird, but you don’t really feel like a “Texan” when you grow up in Texas, until you leave. You need a contrast point.

Baltimore is much different from Dallas (which is near my hometown) and Austin (which is where I got my undergrad), so I started to think about what makes where I grew up different from where I was. So a lot of the poems that are in my first manuscript are sort of looking back at my experiences living in Texas and thinking about what it meant and what does the landscape of Texas do that the city of Baltimore does not.

Now that I am back in Texas, I have had the opportunity to participate in readings in downtown Denton and it’s been really interesting to be in a place that I have been writing about from a distance. It really makes you think about what it means to come home.

I think so. I would like to write good poems more often than I do, but in terms of my creative life and the way that I am stimulated here at UNT and all of the things I’m reading and the ways that they feed into my intellectual and emotional life? Absolutely.

You know, it’s really any artist’s hope that those things – being stimulated – will end up translating into better and better work as they continue to mature.

Matt, a lot of masters programs and doctoral programs require teaching hours. With that in mind, have you been able to quit your day job?

Here at UNT, I’ve had the opportunity to not teach during my first two years, because of the fellowship that I received. But that being said, the nice thing about teaching is that you’re only in the classroom six hours a week or so. You do have to spend time grading papers on the weekend, which can be tedious, but even that can feed into thinking about language and how these particular poems that you’re commenting on are working or how they can be improved. In fact, a lot of the times I was teaching at Johns Hopkins [where he obtained a master’s degree]  I would get out of a class that I was teaching, go home and immediately write a poem because I was really stimulated.

I guess I’ve just always thought of teaching as something that has fed into my work and my intellectual life. If nothing else, standing up in front of a group of people and having to talk precisely and be sort of “turned on” will get you really energized, because you can’t mess up when you’re on stage.

Matt Morton standing in Denton’s Town Square. A place he strolls past on his way to UNT’s campus. Photo: Hady Mawajdeh

Have you had to sacrifice anything to pursue a career in poetry and literature?

I’ve been really lucky at both of the programs that I have been accepted into, because my tuition is paid for and I receive a stipend. And although the stipend isn’t a lot of money, it’s enough to live off of. The trade-off is that even though I get all of this time to write and to read, I have hardly any savings account to speak of. That’s actually one of the nice things about the NEA Creative Writing Fellowship. Its the first time that I’ve had money in the bank in a long time.

You know, a job would make me feel more financially secure and maybe more secure about my future. I wouldn’t be worried about getting a job after finishing my Phd, but time may be one of the most valuable resources that we have in society. People ask me all the time what I’ll do with my degree when I am done and I tell them ‘I hope to teach, but what I’m doing right now is really enjoyable.’

When did you first start calling yourself a poet?

I still feel uncomfortable with that label. Something about it feels slightly pretentious to me. Also, I am only a poet when I am writing poems and the majority of my time is not spent writing, it’s spent reading or thinking or anything really.

I didn’t think of myself as a serious writer till I started my MFA. Before that, all that I had experienced was rejection. When I got to my MFA, I realized that I could hang with my peers who had been in the writing community even longer than I had been, so I realized that I had something to contribute and that I wasn’t an outsider.

What makes you different or special in comparison to others working with in your medium?

I am not sure that anything I do makes me more “special,” but I can say what makes me different as a writer today than I was even a year ago is that my poems are more idea driven.

A lot of the poems that I read, which are published online or in journals, are competently written and I enjoy reading them, but they don’t really stick with me and they don’t really challenge me emotionally or intellectually. The poems I am reading are more of an expression of a feeling, which is fine, but the poems and novels that stick with us aren’t merely expressing something or telling us something, they’re forcing us to ask questions of ourselves and of the world.

I can count the poems that I’ve written that I think do that on one hand, but many of those poems have been written recently, and that’s my ambition with my next manuscript. I want to write a book that contains poems that not only talk about me and my experiences, but address the reader and try to talk about the human experience more explicitly.

That’s something that I am still having to work through. I am constantly thinking about my relationship to my reader. Am I writing for myself or for someone who might read this later? And if the answer is both, what’s the percentage for each one? I think my poems have become less self-conscious and affected the more that I’ve acknowledged that I do care about a readers’ response.

In terms of subject matter, I’ve started to think a lot more about what would be interesting to other people and not just for me. Having said all of that, I would not be doing this if I was only writing for other people. I don’t think any poet would say that they are doing that. It wouldn’t be enjoyable.