Interior designer Lisa Robison started the nonprofit Dwell With Dignity to give families a fresh start and unlimited possibilities. 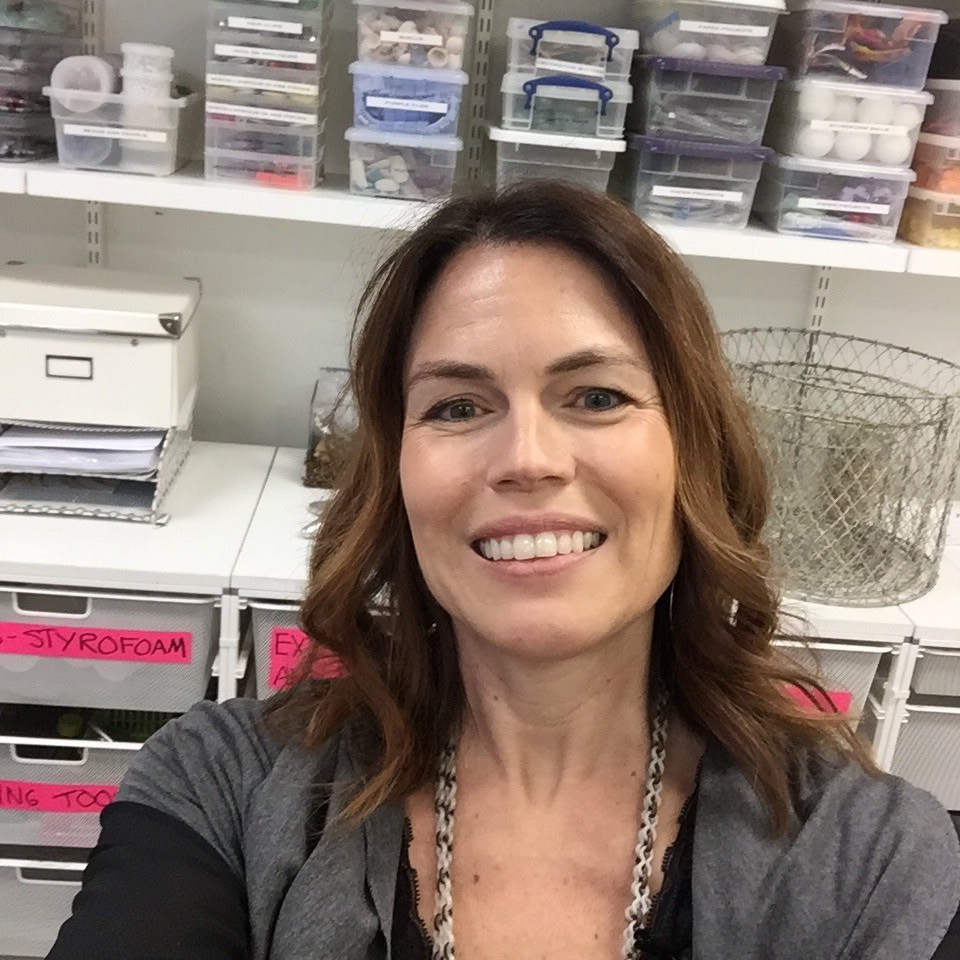 Lisa Robison is the founder and president of Dallas nonprofit Dwell With Dignity,  which creates comfortable homes for families emerging from homelessness. Before starting Dwell With Dignity, Robison worked as an interior designer for more than a decade.

In an apartment inside a public housing complex, the sounds of drilling and women talking fill the space. Those women are working to get drapes hung and furniture built, because it’s their final day to whip this empty South Dallas apartment into a beautiful home for a single mother and her four children.

“Terica, where did you get these drapes?” asks Lisa Robison. “They’re awesome!”

Robison is an interior designer and the founder of Dwell with Dignity. She’s driving force behind the work these women are doing.

“We do interiors for families who’ve been previously homeless,” says Robison.

Dwell With Dignity started in 2009. In the beginning, it was only Robison and her friend Kim Turner. Now, the organization has a bevy of volunteers and recruits interior designers, like Terica Cunningham, to create living spaces that change lives.

“This is very rewarding work and it’s my job to work with families to ensure we create a place they want to live,” says Cunningham.

Robison agrees. She says the place where you lay your head at night plays a role in what you think you can accomplish.

“Your environment is transformative,” says Robison. “It informs who you are. And it allows you to express what you think you can do in the world.”

Below are Before and After photos from a past project.

Other non-profits nominate families to receive Dwell with Dignity’s services. Recipients have often successfully completed programs that have helped them sidestep addiction, homelessness or domestic violence.

“When you think about a family that moves into a space and all they have are two mattresses and a television, how does that space inform what that child feels like they’re capable of?” asks Robison.

She believes homes should be places to create memories.

“So our goal is to create spaces where families can feel like they’re nurturing themselves,” says Robison. “We want them to be in a place where they’re going to live their best lives because they have the ability to do so.”

Robison is married with two kids. She looks like she could be on HGTV with her statement necklaces and perfect smile. But hosting her own version of “Fixer Upper” wasn’t the goal when she thought up Dwell with Dignity.

“From the very beginning, it was kind of a selfish idea about how could I express my creativity and do what I love to do – and what I think I was supposed to do – for my community,” says Robison.

And from the jump, she saw the impact she could have.

Robison remembers the  first home she worked on and how a neighbor was obviously curious about what she was doing.

“She kept walking by and peeking through the windows,” says Robison. “Finally I said, ‘Why don’t you just come in? You’re welcome to come in.'”

The neighbor walked into the apartment with child on her hip, looked around and gasped. Robison says the neighbor exclaimed, “I can breathe in here.” From that moment, Robison was hooked and she knew she wanted to see how far she could take this effort.

Today, Dwell with Dignity has designed and furnished 100 interiors. They’ve expanded to Atlanta, moved into a giant warehouse with a studio and they host Thrift Studio – an annual shopping benefit – which helps cover their costs and tailor the projects to families’ individual needs.  No two homes are exactly the same.

“We’re never going to be cookie cutter,” says Robison. “Even if someone said, ‘Here. I’ll donate the same mother’s bed-set to you for every single project.’ We couldn’t do that, because there’s value in the creative process and putting it all together. It has to be genuine.”

And families definitely appreciate it. Back in that South Dallas apartment, the single mother – who asked not to be named- broke down when she saw what had been put together for her family.

She cried and thanked the Dwell With Dignity team for using colors she loved and for adding elements that her children admired, like a refurbished vanity for her pre-teen daughter.

“Look at this bed! Oh my god,” says the mother of four. “You don’t know how long it’s been since we’ve been on a bed!”

And Robison says that’s better than anything you’re going to see on TV.

Below are more Before and After photos from another past project.

What made you think this was a cause people would want to help with?

To be honest, I didn’t conceptualize Dwell with Dignity the way it is today when I first started it. It was kind of a selfish endeavor in which I could express my creativity and do what I loved to do. It was a way for me to do what I was supposed to do. The talent that I have to create interiors and put things together – how could I do THAT for my community? And would it be valuable? See, I had found when I was working for a more privileged clientele was that your environment is transformative, but it also reflects and forms who you are. It allows you to express what it is you think you can do in the world. So it’s often times the people who can afford that sort of transformation who can benefit the most from it and so with that idea I thought, “How can I do what I love to do for people in my community and try to transform their lives in some way?”

In the beginning I thought, ‘This will probably just be me. Maybe a couple of friends.” I told a friend that I had attended interior design school with about my idea and she was so excited about the idea. She said ‘We need to get the word out. We need to share this with the design community, because interior designers, artists and creatives will get this. They’re going to understand exactly how environment will affect you and your life. They’re going to want to help.”

So we reached out and they were inspired and excited about it that they wanted to help! So we realized that we were starting a movement that the two of us were not going to handle by ourselves. Then we started thinking about how we could help many families, instead of the few I might have imagined.

What do you think beauty brings to the home and to a person in general?

I think beauty is very individual, but I think it unifies people. Think places that you’ve walked into before and gasped. You say “Wow!” And you get a feeling that the space gives you.

I remember doing my very first home for a mother and her baby. While I working on the home, there was another woman who would walk by with her baby on her hip and peek at what I was doing. She would walk by multiple times and just try to see what I was doing and I finally said, ‘Why don’t come in here? You’re welcomed to come in.” And she walked in, looked around and put her hand on her chest and said, “I can breathe in here.” I was hooked. Because it was an emotional and beautiful experience that she had just walking into a space.

It informs how you behave. Like when you walk into a holy space and you become quieter. So not only does it inform how you feel, but it also affects your behavior. So when you have a dining room with a dining room table in it and art on the walls and fabrics on your windows, you feel like you want to stay there. You feel comfortable and like its home. Children feel taken care of. They feel like they have a place they want to come back to so they can regenerate. And I think that’s so important. Cause if you think about a family that’s been homeless and all they have is two mattresses and a television, does that 9 year-old little boy want to come home to that after school? Will he when he’s 10 or 11 years-old? How will that space inform what that child feels like they’re capable of? So our goal is to create spaces that a family can feel like they’re nurturing themselves and that they’re going to live their best lives, because they have the ability to do so.

Home is a place where my family can come together and create memories. I think that home is a place that should regenerate your energy. It should be a place to relax and where you can invite people into your world. It’s a place you can share with friends and family, because as you create your home you share your life.

Is interior design a form art?

You’re the founder and president of Dwell with Dignity. You have input on all the designs happening. You’re also the face of the group. How do you maintain balance, because that doesn’t even begin to account for the time you spend as a mother and wife?

I don’t think I maintain balance (laughs), but I strive for it. I’m one of those people who needs to remain active – thinking and doing – so I will always do that. But I have found that in the past few years that meditation helps me. Now I don’t mean that in some far out way, but if I can actually take ten minutes a day where I’m quiet, then it’s transformative. It changes the way I relate to anxiety and stress. It helps me be easier on myself.

Do you consider yourself creatively satisfied?

Wow! I wish you asked me that one last week, because I would like to think on that… I don’t think you’re ever creatively satisfied. I think that you’re constantly influenced, challenged and inspired and the day that you’re not inspired anymore would be a really hard day to be creative.