Jack Of All Trades

Actor, designer, director, puppeteer, composer: If Justin Locklear can't do it onstage, he'll fake it. And you'll believe him. 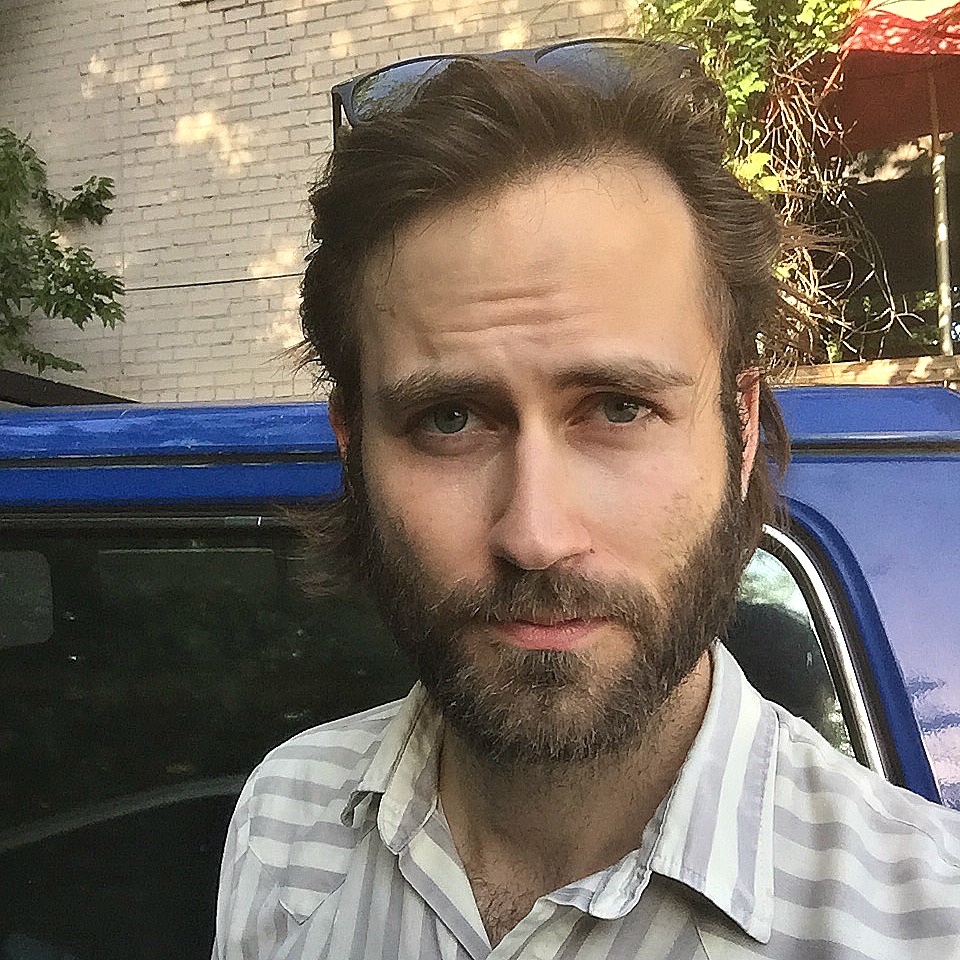 He calls himself a 'theater artist' because otherwise, to encompass Justin Locklear's talents, his title would be something along the lines of (deep breath) actor-puppeteer-costume-designer-director-writer-musician. And barista. Locklear hit town in 2009, and since then, he's played crazies, villains, drag acts, an egg salesman and a singing cowboy named Dale Evans. He's also become Ochre House Theater's very first artist-in-residence. Now he's got a musical he wrote and directed. With clowns.

Enjoy, and let us know what you think in the comments section below

Clowning Around: Justin Locklear on creating and directing ‘Dreamless’ at the Ochre House Theater

Justin Locklear is lucky. He knew what he loved to do, had to do, from an early age. As early as elementary school in Atlanta, Georgia, he was doing pretty much anything involving performance.

“The device of storytelling was just dazzling to me,” he says. “When I was a kid I would listen to Andy Griffith tapes — his one-man show stuff — or Bob Newhart and all just these old comedians, well into the night. And then I would watch Buster Keaton videos. Just different little things that people can do performing. I was always, like, ‘That’s amazing! That someone can do something so simple but release this intoxicating identification.’

Locklear admits he wasn’t a good student, but any speech, any classroom presentation? He was there. So a teacher, Luann Purcell-Jennings, steered him into theater. And because she had gone to Baylor, Locklear did, too. He says all these early certainties gave him ridiculous amounts of self-confidence onstage: “Once I started doing shows I was like, ‘Yeah, I got it. Done! That just makes sense!’

Locklear came to Dallas in 2009. He’s been acting at theaters like the Ochre House, the Undermain and Dead White Zombies. Perhaps it’s his confidence, perhaps it’s his training in clowning with its little bits of extreme behavior, perhaps it’s his simple enjoyment and comfort onstage, but Locklear has an undeniable presence: Even in small roles, his characters grab attention. Playing a caricature of a newspaper reporter in Cara Mia’s ‘Zoot Suit,’ he used his slender frame in angular, elbowy ways that suggested John Cleese’s Minister of Silly Walks. In contrast, he was literally radiant yet wan as the morphine-addicted mother  in ‘Morphing,’ Matt Posey’s demented send-up of ‘Long Day’s Journey Into Night’ at the Ochre House (see below).

But Locklear’s talents go beyond creating unforgettable crackpots and oddities. His creativity seems omnivorous. He designs and builds puppets and costumes. He writes and directs shows. He sings and plays piano, guitar, accordion and trumpet.

And what he can’t actually do, Locklear says, he’ll figure it out. Or fake it.

Justin Locklear in the Undermain Theatre’s production of ‘The Droll’ by Meg Miroshnik. Photo: Katherine Owens

“There is this scrappiness that theater artists have,’ Locklear says happily. ‘It’s like, ‘What do you need to do? Give me a month! I’ll figure it out!’ Like, I’ve done shows at the Ochre House where after the show, people come up and they’re like, ‘I never knew you could play the guitar like that!’ And in my head, I’m like, ‘And if I do my job right, you never will know I can’t.’

So, the question’s asked: What’s the difference between him and a con man?

Locklear has played crazies, drag acts and villains — he even played Angelo, one of Shakespeare’s creepier opportunists in ‘Measure for Measure’ for Shakespeare Dallas. In between, he dances with his girlfriend in the company she created, the Danielle Georgiou Dance Group. He also enjoys street clowning — using Eastern-European-klezmer-oompah dance tunes by the likes of the Boban Markovic Orkestar and Slavic Soul Party. Why this music, in particular? “It’s visceral, incessant, buoyant and human,” he says. A fair description of his own performance style.

But all his restless versatility only makes this fact stranger: Locklear is blue-eyed, slim and movie-star handsome. Yet — outside of Adonis for a Shakespeare Dallas ‘Venus and Adonis’ — he’s rarely played the young, romantic lead he seems perfect for.

“I think he could do that standing on his head,” laughs Matt Posey. “And besides that, it’s not a challenge. And that’s what he gets to do here, he gets to challenge himself.”

Posey, artistic director of the Ochre House near Fair Park, first hired Locklear as a puppeteer in 2010 for ‘Bill,’ a drama about ‘Naked Lunch’ author William S. Burroughs. “And then I learned how much natural talent that boy has,” he says. “It’s just amazing.”

Since then, Locklear has appeared in such Ochre House shows as ‘Mean,’ a violent drama about Charles Manson — with Locklear playing a singing cowboy named Dale Evans. And he’s played a giant puppet-headed slaughterhouse employee in ‘Dreams of Slaughtered Sheep.’ Of course, he designed and built the puppet head himself.

Justin Locklear as Mary, delivering his closing monologue in ‘Morphing’ at the Ochre House

That run of roles was capped this year when Posey made him the company’s first artist-in-residence. It’s part of Posey’s ten-year-plan to make Ochre House into a fully-functioning professional theater — in this case, establishing a full-time job with salary and benefits. The 29-year-old Locklear had been working at Starbucks.

“If anyone asked me, how do I support a local artist,” Locklear says, “more than going to see their shows, more than buying their art – both things I love to do – the one thing I would tell them is find a way for them to have flexible employment.” It gives an artist not just freedom — it gives him time. Time to collaborate, time to cogitate, time to create.

Locklear’s latest creative challenge? It’s Ochre House’s current show, ‘Dreamless.’ Locklear wrote, composed and directed the musical, which is set in a diner – run by bickering clown-siblings. For all of his self-confidence, Locklear says the clowns’ quarrels about the future of the diner reflect some of his own persistent questions. As a theater artist, what is his goal, ultimately? What would or should he settle for?

“You know, I’m very lucky to have the people in my life that I do, and to be able to pursue the things that I get to pursue,” he declares. “But — what is enough? What is happiness? What is making the art meaningful and – is this the dream?”

Finding answers to those questions may be Locklear’s biggest challenge.

When did you first consider yourself a professional theater artist?

As soon as I got into debt for it [laughs].

But no, I think the first time I really thought of it as a profession was probably one of the first plays I did in middle school – because it was like, ‘All right! This is it!’

I think, growing up — I can’t speak for my entire generation — but there’s this element of limitlessness, of, like, ‘Oh yeah, I’m great! I have a perspective! I’ve got a point of view and people should listen to me and I’m going to do this forever!’ So it’s this very over-the-top confidence. It’s a great way to think about what you’re going to do. So even into high school, I always thought, ‘Yeah, I got it!’

I heard you were a great barista.

I was! Well, I don’t think I was very good at making coffee [laughs]. But I think I was a good barista because I think I figured out a way to make that work.

I think they’re struggling along without me.

Is there anything you’ve had to give up to pursue your art?

I don’t think I’m very good at maintaining friendships – just chemically, empathetically. I’ve had to work hard at that.

Yeah, yeah!  But I’ll make you think that I’m not! Kind of. Until you hear me talk about how I can’t care. So that’s really hard for me to do.

But here’s how theater kinda works: It throws you into a room full of people who are all really emotionally aware and then they become really, really fast friends, and then you get torn apart and thrown into different parts of the metroplex. And this happens nationally, internationally, and it happens over and over again, people are thrown together and torn apart. And some people do a really good job at keeping those friendships alive – Danielle [Georgiou, his girlfriend, founder of the Danielle Georgiou Dance Group] is really good at it. And I really have to work hard at it.

But that’s not something you gave up. That seems more like a personal failing. Or we’ll be kind and call it a ‘quirk.’

But it’s something [lasting friendships] I really want, but it’s something I don’t really have time for. There are so many people that I want that with, but whenever I try to bring them into my life or figure out a way to hang out, it’s always in the context of doing a project [laughs]. You know, ‘Hey, let’s do something so we have an excuse to be hanging out!’ But that’s something I’d really love to spend more time learning.

The Many Guises of Justin Locklear:

So this is a kind of ‘performance’ you haven’t figured out.

I think that your analysis is somewhat correct — that this isn’t something I’m giving up. It’s something I’m not really good at. But as a person who wants to learn everything, it’s something I’ve identified. That – I really want to learn that. But your question is an apt one to ask, given all the heaps of optimism I’ve thrown at you. Is there a downside? I don’t know.

No downside to theater as a ‘calling’? So you’re creatively satisfied?

But — and this is partly what the musical ‘Dreamless’ is about — does there come a time when happiness is the definition of success? That’s become very important for me because I don’t necessarily know what that is. I know making art makes me happy. I know that for a fact. I enjoy just clowning in the street. But whether or not doing all these things are important enough — I mean, after a month of doing something, there comes a night with a strange lucidity when you wonder, ‘If I didn’t just do this stuff, would I be way healthier? And more relaxed? And would life be better?’

Ohhhhh. [laughs] And then the darkness creeps in …

Art is often a solitary pursuit, so what many artists say they’ve given up is their social life.

Oh! That. [laughs] I have definitely done that. That wasn’t even a question! It’s like the Halloween thing. There are some people who love Halloween, people that are actors, getting in costume, going out.

But I’ve never been able to contextualize Halloween outside of a performance. It’s always sort of, ‘Blag.’

It’s just another performance. And not much of one. Only one night.

Right. And whether that’s a good thing or a bad thing, that’s how I see much of my life.

Music in the podcast from the Boban Markovic Orkestar. Interview questions and answers have been edited for clarity and brevity.