Producer James Talambas has always been infatuated with sound and music. Now he's generating noise that art galleries want to hear too. 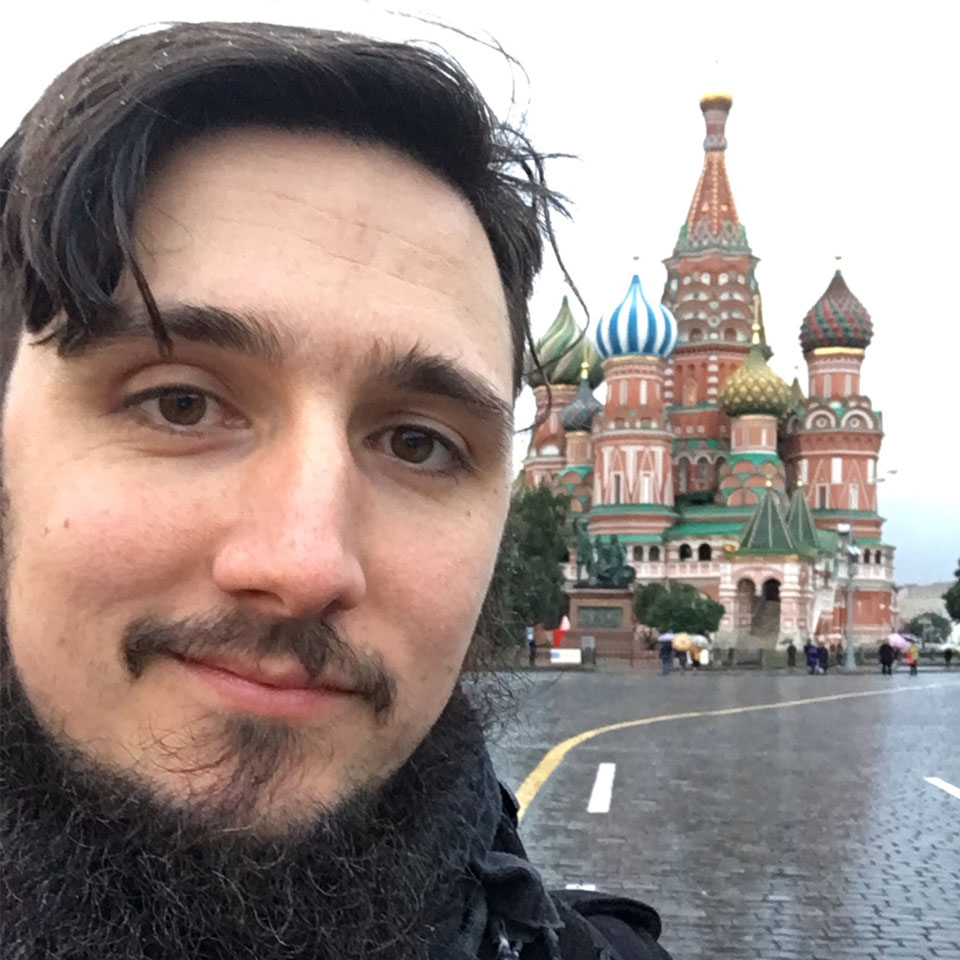 James Talambas is a musician, deejay, composer and producer at his company, New Media Recordings, in Fort Worth. He also creates sound and light installations that speak to issues ranging from fracking to anxiety. He is working on a degree in music composition at the University of Texas - Arlington.

Welcome to the Art&Seek Artist Spotlight. Every Thursday, here and on KERA FM, we explore the personal journey of a different North Texas creative. As it grows, this site, artandseek.org/spotlight, will eventually paint a collective portrait of our artistic community. Check out all the artists we’ve profiled.

Today, James Talambas produces music for indie bands from his Fort Worth studio. He travels around the world to work with musicians. He’s a composer too and recently, “Fort Worth Weekly” named him the city’s artist of the year.

Growing up, though, Talambas was a troubled kid. He kept to himself and was uncomfortable in social situations. School wasn’t his thing either.  He describes himself as a terrible student and says that by the time he was in high school, he had enough and dropped out. But there was one thing that that he did love – music.

He had always had an affinity for music. As a child, he took piano classes, but he wasn’t a fan of the instructor, or the didactic nature of lessons. So he quit. He still loved the rich sounds that came from the piano and continued to play it. The piano began to help him understand and communicate complex emotions.

“I’d sit and watch TV and play the piano. Ya know?” says Talambas. “I’d just play along to these sitcoms and see what kind of different feelings I could get out of those, and I would do that for hours.”

It wasn’t until his late teens that Talambas was diagnosed with severe depression with psychosis. And recently, the 33-year-old learned that he’s also on the autism spectrum.

Talambas is open about his struggles with mental illness. We were only five minutes into our two-and-a-half hour interview when he told me about the challenges.

“Depending upon how I feel, I can have different types of hallucinations,” says Talambas. “

He says the hallucinations can be visual, audible and completely sensory, but the hardest thing is that they can cause him to question his own reality.

“[They] can be anything. Sometimes it’s dots or lines across my vision or the feeling that someone is there when they’re not. I get vertigo a lot. So the feeling that the world is moving is something that happens a lot,” says Talambas.

Megan Henderson, the Director of Events and Communications at Near Southside, says Talambas is a one-of-a-kind artist who brings something special to the scene.

“James is very mysterious,” says Henderson. “In fact, he’s elusive. For some time, I had seen him around at coffee shops, bars or even deejaying an event, but he was so quiet. Then I started talking to him and I realized he was so sweet and funny.”

North Texas photographer Rambo says that so many artists and musicians in North Texas have counted on Talambas to help them make their art come to life.

Rambo recalls a time when musician Leon Bridges turned to Talambas to help him record.

“This is before Leon was signed and before he had a place to record, but James was recording him in his own living room, just so that Leon could have something to put out there,” says Rambo.

His reach as a collaborator goes far beyond North Texas. Artists from Sweden, Brooklyn and Austin have come to Talambas’ house to record in his professional studio,  New Media Recordings.

Fort Worth artist, writer and curator Christopher Blay says Talambas’ expertise with sound manipulation and engineering makes him equipped to collaborate with all sorts of artists in all sorts of mediums.

“When you think about someone who mixes music, they have have to combine a lot of different elements. And I think that’s an apropos metaphor for his work, because he’s combining a myriad of elements to create his work,” says Blay.

Rambo says Talambas  is someone she counts on for personal help as well.

“When we first met, we were both working a million jobs. We got to know each other when I was working at a bar he dejayed at,” says Rambo. “I really liked music he spinned. Anyway, we were both dealing with mental health issues and we sought help around the same time and we supported one another. We both understood where the other person was coming from.”

Creating Music And Sound Inspired By His Illness

Talambas’ illness informs and inspires his work. One of his installation pieces was called Panic Room. Using light and sound, he created an experience that would help anyone understand what it feels like to have a panic attack. Here’s another example of an installation:

Talambas has fully embraced sound design as an art form. His most recent installation work is titled, “2524 Earthquakes This Past Year.” It’s a critique on the fracking industry and its possible link to the natural disasters. Talambas’ gallery installations fill a different need than the work he does other musicians.

“The questions that we all have in our contemporary society cannot be answered with a song and so I began to think, ‘How else can I answer those questions?’” says Talambas.

The piece is on display at Dallas’ 500X. It’s eight large steel plates arranged on the floor. The plates have been turned into speakers that play his stirring composition. Standing in the space can feel uneasy because the hum is often interrupted with a sharp sounding ping that makes you wonder if the room is moving or about to close in on you.

Talambas says that the physical portion of the “2524 Earthquakes This Past Year” – the plates – are secondary to other aspects of the piece. “Really, what’s important about the piece is the idea and the sound.”

Rambo says she’s so happy that James is producing pieces like this. She believes that having an artist that can express the difficulties of living with mental illnesses can really open the eyes of America to what life is like for her and James.

His work also allows people who may prefer science to art to enter the artist’s world, says Blay.

“I think the impact of his work is to expand the way that we think about and experience art,” says Blay.

Talambas wants you to feel on edge when you view and hear his installations. They are about tough topics – fracking, consumerism, oppression. But your unease is simply a sliver of the anxiety he feels.

How does living in North Texas affect the production of your art?

Well, this is becoming less true, but the cost of living here is one thing that affects my art. It’s pretty affordable here.

Also, I think living in a place that is very religious, um, you really have to take sides. It becomes a philosophical place. Now the philosophical argument might not be exactly what you’d like it to be as an educated adult, but I think that that’s part of being here in this place. Just like it would be in Rome, where the religion is there. It’s right in front of you. It’s a Catholic place. It’s there. So it matters.

Dang. It’s a really oppressive place now that I am thinking about it. Hahaha! Side note: I am probably the most pessimistic person you’ll ever meet.

Well if it’s so oppressive, then how are you able to create?

And you can’t help people if you’re on that mountain. You can only help people, and you can only find God, within the hardest places, within your society and with those who are struggling the most. And I feel like if I moved to a really nice place, like San Francisco – which I love because my teacher is out there –  it’s so beautiful that I tend to forget about the really important issues that will still be going on. And I would rather be among them, than away from them.

Have you quit your day job?

I decided 12 years ago that I would start doing things that had a meaning a purpose for me. So technically. . . Well if you want to get real, I’ve made all of my income off of 1099 contract work for the past 12 years.  So yes and no. I work at the Synagogue, but I do sound for them. I’ve been doing sound for a living the past 12 years.

So the answer is no, but you try to only work on things that you’re passionate about?

So how do you maintain balance in your life? Because I know that you’re in a relationship with an artist. I know that you’re working with musicians like Ronnie Heart. I know you’re doing sound at the Synagogue. You’re always working. How can you keep balance between work and life?

My girlfriend would say that I do not keep balance in my life. (laughs) But I think that if you constantly have your mind in your life’s work that your balance will show itself.

When did you start to call yourself an artist?

When you make something like “2,524 Earthquakes In The Past Year,” do you consider that music?

Never. Why would I be? I don’t think I will ever be creatively satisfied. I think that’s when death comes. And even then – not even in death.

What have you given up to pursue your art?

What makes you different or special? What sets you apart from other artists?

Personally? Or as an artist?

Well, yeah. I think that anyone can do these things. I know I get in trouble for saying that, but I think it takes practice to keep yourself open to the possibilities of what may come. And I think that I’m not doing anything different nor special. It’s just that I’m trying to leave myself open to such a degree to what the world may show me, and then I go through with it.

It’s merely the practice of letting an idea come to your head and then executing said idea. It’s very elementary. If you want to do something, you just keep going toward that thing. If you want to do it, do it. If you don’t have the drive to do it, don’t do it. You know? Some days I just want to watch “The Daily Show” and that’s fine. But then there’s other days where I understand that I need to get some stuff done. And not only do I have to get stuff done, but I have to make it good, because otherwise I am not doing anybody any good.

Interview has been edited for clarity and brevity.