Maroches Bakery ushers in the holiday with a special kind of bread called pan de muerto. 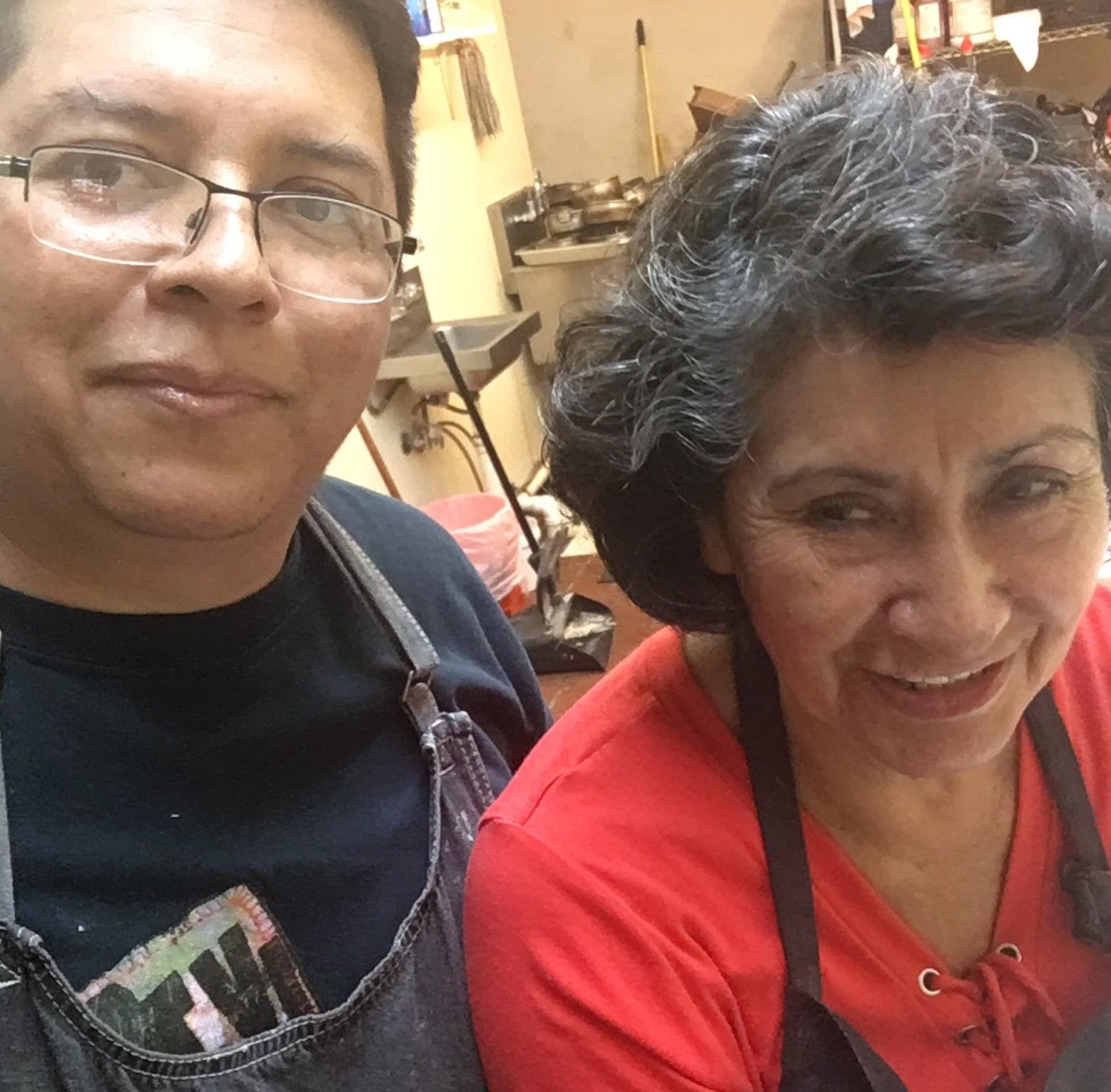 Graciela and Manuel Tellez are the mother-son duo behind Pasteleria Maroches. It's a small bakery in Dallas' Winnetka Heights neighborhood and a cultural hub for the Mexican community.

Every year, the bakers make pan de muerto — bread of the dead — for Day of the Dead. This year, they faced unforeseen challenges that almost upended one of the busiest seasons of their year.

You can listen to a Spanish version of this story here.

Welcome to the Art&Seek Spotlight. Every Thursday, here and on KERA FM, we’ll explore the cultural creativity happening in North Texas. As it grows, this site paints a collective portrait of our artistic community. Check out all the artists and artworks we’ve chronicled.

Every fall, Pasteleria Maroches, or Maroches Bakery, in Oak Cliff ushers in Day of the Dead with a special kind of bread, and people come from all over Dallas to buy loaves by the bag.

But, this year’s long rainy season — just weeks before the holiday rush — presented a challenge for the bakery.

Manuel Tellez is alone in the shop during one of October’s hardest downpours. He points to a leaky hole in the ceiling. Below are three, orange buckets collecting rainwater.

“It didn’t stop raining for more than nine hours,” he said. “There was no time for all of that to dry because the drains were filling to the brim … All of that sets back our production.”

Listen to this story in Spanish here.

To his left, there’s a large, broken refrigerator — the kind used to display desserts. Tellez says water has been pooling to the back of the kitchen, and it’s difficult to bake in those conditions.

The rain couldn’t have come at a worse time.

Tellez and his family make Mexican desserts year-round — but in October, they make pan de muerto, or bread of the dead. It’s a round, sugar-coated bun used to decorate Day of the Dead altars. It’s topped with doughy bits shaped like crossed bones.

Tellez says they can usually make hundreds of loaves a day at the peak of the season, but having to deal with damage to the roof and faulty equipment has left him feeling like a brand new business. He says he’s even had to turn away orders from customers.

Once the rain eased up at the end of October, Tellez says they only had a couple of weeks to do something they usually start in mid-September.

Tellez’s mother Graciela is in the kitchen a couple of days before Day of the Dead. She’s standing at a large linoleum slab with a pile of yellow, glistening dough. It looks like the alien monster from “The Blob.”

” Everyone who makes bread is an artist.” she says as she slices up the dough. “Because you have to learn to understand your dough. I can’t just read a recipe. You have to have a base, and studied it a little.”

You’re hit with a wave of warmth when you step into the bakery. Graciela says the shop has to be kept hot because it helps the dough rise more quickly.

Her recipe for pan de muerto is specific to Mexico City — where she grew up — and it’s pretty simple. She uses flour, eggs, butter, yeast and sugar. She points to a tall bottle of agua de azahar, or orange blossom water.

She’s wielding a small, plastic scraper that she uses to vigorously slice the dough into pieces. She learned this whole process from watching her mother.

“I didn’t really like it,” she says. “Because we had to make it by hand, and it made a horrible mess.”

Graciela says they plan on making close to 250 loaves daily in the days leading up to Nov. 1 and 2. She uses a single, industrial oven to make the final product.

Cecilia Bardales drives up from Cedar Hill regularly to buy loaves. She’s lived in Dallas for five years, and she’s originally from Peru.

“In Peru, we also have a variety of breads,” she says. “The difference with pan de muerto is this exquisite flavor. I don’t know. It must be an ingredient we don’t use in Peru.”

Just like her mother taught her, Graciela taught Tellez to make bread. He says it’s like sculpting.

“You have to work it with your hands,” he says. “Give it shape. Just like someone sculpting metal, you sweat and work long hours. It takes up a lot of your time. Everything. Everything is focused on what you’re creating. It’s an art.”

An artform passed on by family. Tellez doesn’t have a recipe handy to reference. He runs on intuition and memories.

“That stays with you just like a musician who’ll forget a song in their head,” Tellez says. “They just hum it, and boom! There’s the song. It all starts to flow … It’s hard to teach it to someone outside of your family. If you remove that part of the experience, forget it. Even your water’ll burn.”

Manuel Tellez, co-owner of Maroches Bakery, stands in front of the Day of the Dead altar he sets up every year in his shop. The Oak Cliff bakery has become a cultural hub for the neighborhood’s Mexican community. Photo: Miguel Perez

The long rainy season may have delayed Tellez, but it didn’t crush his spirit.

He’s been baking bread in Oak Cliff — across the street from the Kessler Theater — for nearly twenty years. He says his family has seen it at its lowest — when it was dangerous to walk at night — and they’ve so far survived the cost of doing business in this gentrifying neighborhood.

Make no mistake. Tellez says this year has been like starting from zero, but it’s his and his mother’s passion for tradition — for pan de muerto — keeps them alive.

Miguel Perez is an arts reporter and digital producer for Art&Seek. Before he joined KERA’s arts and culture team, Miguel was helping put together newscasts as an assistant producer for the stations local Morning Edition broadcast. View more about Miguel Perez.