Rob Askins drew on his troubled Texas adolescence to write 'Hand to God,' a wicked comedy about an evil puppet. Then it went to Broadway. And now, at last, it's opening here. 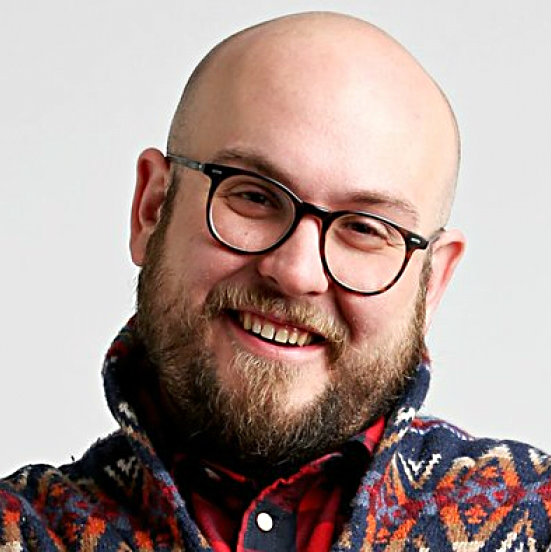 Broadway these days is typically full of jukebox musicals and revivals. So the 38-year-old Robert Askins is the rare, contemporary American writer to have a play produced there - and his 'Hand to God' earned five Tony nominations. A graduate of Baylor, Askins drew on his own adolescence to write the pitch-black comedy - which in 2016 became the most produced new play in America. WaterTower Theatre, at last, is presenting the area premiere of 'Hand to God,' so we re-visit our 2015 interview with him - just before his play debuted on Broadway.

‘Hand to God’ is a raunchy, pitch-black comedy about a demonic puppet – and it earned five Tony nominations in 2015, including best new play. ‘The New Yorker’ dubbed it ‘Sesame Street’ meets ‘The Exorcist.’ Playwright Rob Askins has theater ties to North Texas, but his play is only now making its local debut. We interviewed Askins just before ‘Hand to God’ opened on Broadway. For this week’s Art & Seek Spotlight, we re-visit that interview – just as WaterTower Theatre gives ‘Hand to God’ its North Texas premiere.

Rob Askins just before ‘Hand to God’ opened on Broadway in 2015 – when he was still tending bar in a Tex-Mex restaurant in Brooklyn. Photo: Joan Marcus

In the play,’Hand to God,’ the first time we see teenaged Jason, he’s in a church basement with his mother’s Christian puppet ministry. Jason (Parker Gray) is timid and lonely. But the show they’re prepping for is only a week away, so his mom, Margery (Shannon McGrann), pushes him into demonstrating his new sock puppet, Tyrone.

Jason meekly, half-heartedly sings “Jesus loves me, this I know” — and is brutally mocked by Timmy (Garret Storms), the class bully.

‘Hand to God’ at WaterTower Theatre in Addison, previews Aug. 3 and runs throughAug. 26.

OK, so it’s no surprise that pious puppetry is not much fun, especially for socially awkward kids. But playwright Rob Askins insists it was fun – when he was eight or nine years old, and his mother was indeed running a puppet show for their church. “My mother was looking for a way to make her mark in the ministry,” he says, “and it seemed like a fun thing to do. And it was. You know, I had a lot of fun doing it when I was younger.”

Askins grew up in Cypress, Texas – once a little town right along Highway 290 between Houston and Austin. His family was one of the conservative German Lutherans who came down from Oklahoma for the lumber and construction opportunities (it’s not called Cypress for nothing). Askins’ grandfather even built the house he grew up in. Then in the ’80s, oil company execs moved in and thoroughly gentrified it, turning Cypress into one of the wealthiest suburbs in the country.

Even so, puppetry could almost seem like the family business, Askins jokes – and not lumber. His aunt, Sally Askins, teaches costume design at Baylor University. She received her MFA at the Dallas Theater Center – back when it was connected to Trinity University. And Rob Askins says one of his first exposures to big-time, non-sock-related puppetry came when his aunt took him to see a show at the Dallas Children’s Theater – probably Dragon in 1990. He recalls his aunt bringing him backstage to meet the show’s giant dragon puppet. And that North Texas connection continued: ‘The Love Song of the Albanian Sous Chef,’ one of Askins’ earliest plays, premiered in 2011 at Dallas’ Festival of Independent Theaters.

Sulky teens are always a handful: Stephen Boyer and Geneva Carr in the 2015 Broadway production of ‘Hand to God.’ Photo: Joan Marcus

Despite all this, in ‘Hand to God,’ puppetry, Christianity and suburban life – they all come in for an outrageous, comic beat-down. They’re unable to withstand the shock of puberty, doubt and, well, an angry devil. Tyrone, Jason’s button-eyed, little, foul-mouthed Frankenstein, takes over his life by becoming a hilarious, unholy terror. He lewdly propositions a female student (Debbie Ruegsegger). He goads young Jason into trashing nearly everything.

After all this wreckage, an anxious Jason asks the puppet – his own left hand – “Are you –  the devil?”

“Are you?” Tyrone retorts.

“I dunno,” Jason says defensively. “I don’t think so.”

“Do you think devilish thoughts?”

So . . .  just how autobiographical is Askins’ play? Did he ever have a puppet try to kill him? Or give him sexual advice?

Things have gotten just a leeetle … out of hand. Steven Boyer, center, in the Broadway production of ‘Hand to God.’ Photo: Joan Marcus.

“Ripped from the headlines,” he says with a laugh. “Ripped from the headlines. No, I was an angry young man. My father passed when I was 16 – and that threw my world out of kilter. It was very difficult to make sense of the well-meaning and well-adjusted world around me because it seemed as if everything was going to naught. And that engendered a lot of very self-destructive and really dark behavior.”

At Baylor, where Askins studied performance, he drank too much, smoked too much weed, cut classes and wrote bitterly profane plays. Inspiration, he says, came from David Mamet, Sam Shepard and Sarah Kane. She’s the intense British playwright who committed suicide at 28.

But Askins’ real immersion into working theater came after he moved to New York. He took any job he could find at the 88-seat, off-Broadway company, the Ensemble Studio Theatre.

“They really provided the space for me to fail disastrously. And for me to stop trying to write like Sam Shepard,” he adds. He’s referring to an earlier play, ‘Princes of Waco,’ which did, indeed, fail as a piece of pseudo-Shepard, tough-guy Texana.

One could easily believe Askins made a Faust-like deal with the devil. He’s written more than a dozen plays, but ‘Hand to God’ was only his second ever to be produced. Yet it opened successfully off-Broadway, then ran for nine months on Broadway.

Saints be praised – a miracle. This simply doesn’t happen in the American commercial theater, not for young American playwrights at any rate. Broadway is crowded almost entirely with jukebox musicals, movie adaptations, revivals and British imports. ‘Hand’ got there mostly because in 2011, when it opened at EST, Kevin McCollum – who produced ‘Avenue Q’ and ‘Rent’ – happened to see it and nursed it through a second, larger, successful, run at the Lucille Lortel off-Broadway.

Of course, it didn’t hurt that, from the first, ‘Hand’ was hailed in reviews as raucous as ‘The Book of Mormon’ and with puppet sex like ‘Avenue Q’ – two musicals that, more or less, helped pave the way for Tyrone, the berserk bit of footwear.

Yet Askins’ play is actually riskier and darker than both of those musicals. At its center is a damaged family that lost a father. It skids into some dangerous territory for a comedy – a teacher having sex with a minor – and it struggles with the question, ‘What is evil?’

Askins keeps the question open as to whether the puppet is a Jekyll-and-Hyde alter ego of Jason or is truly a demonic possession of some kind. He plays with our doubts. Psychosis or Satan: It’s really an issue of taxonomy, he explains. We want to label “the darkness” in human life as one thing or the other because that way, we contain it.

‘The Love Song of the Albanian Sous Chef’ with Whitney Holotick and Adrian Churchill, presented by Rite of Passage Theatre at the 2011 Festival of Independent Theaters. Photo: DeAndre Upshaw

“Naming the darkness is not solving it,” the 38-year-old Askins argues. “If we had the proper name and the proper model to fit the severity of the problem, we would already live in Utopia. And the split in the character is an attempt to reconcile his slowly rolling, dark understanding of the universe, to reconcile it with a religion that has been fairly bowdlerized. It’s been neutered. Christianity was built at a very tribal and dark time, but this American iteration” – the one he grew up with via puppets – “is stultifyingly simple. I mean, this is a religion about nailing a man to a tree, and we forget that.”

Even so, one unusual aspect of ‘Hand to God’ is that for all its Luciferian mockery of well-meaning Christianity (it’s probably the first Broadway show to give the devil his due since Damn Yankees in 1955), the Lutheran pastor is not portrayed as a cardboard tool. Ultimately, for all the gleeful profanity here, there’s no easy dismissal of faith.

“One difficulty in the modern, enlightened, atheist take on religion,” Askins says, “is that it ignores the utility and the nurturing of humanity’s best impulses through religion. We paint with a wide brush, and there are good people, good churches, out there, trying to do for the poor, for the lost souls in their communities.”

This is why ‘Hand to God’ holds real promise for this playwright: Such thoughtfulness actually went into this funny, foul-mouthed piece of felt. And its success has changed his life.

“Wedding laughter with ideas is hard. And not often done. But when it happens, um, apparently – it’s profitable,” he says with a laugh.

‘Hand to God’ has been staged in London. Askins has been working on Hollywood projects, he has a play premiering next week at a Chicago festival and in January, his new play, ‘The Carpenter,‘ premieres at Houston’s Alley Theatre. It follows a blue-collar Houstonian who’s worried about marrying, naturally, a Dallas debutante from Highland Park.

As for ‘Hand to God,’ yes, Askins says, his mother and silbings, who also suffered through his father’s death, have seen it. The experience, he reports, was an “unqualified joy.” They’d given him ‘carte blanche’ to use the family’s suffering – to use it in whatever way he needed to in his play.

“So the ability to turn that pain into something is actually cathartic for all of us,” Askins says. “To hitch a horse to that cart and pull it somewhere. Because now my father’s death helps other people to understand what that moment was like for me, for growing up, for being in Texas in that period of time.