Without A Home But Not Without Art 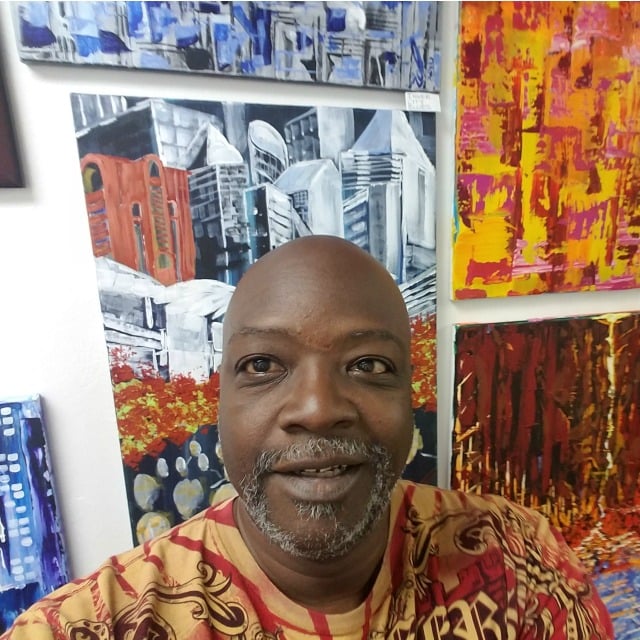 Edwin Fuller is a painter in the Stewpot Art Program, which provides free art classes and supplies to the homeless and at-risk populations in Dallas. Fuller studied art in at the University of Colorado Boulder and moved to Dallas in 2011 in search of a fresh start and to pursue art as a real career. He lives in a homeless shelter downtown and says he has sacrificed everything and is willing to sacrifice more to make his dreams a reality.

Edwin Fuller made a choice a long time ago: art would be his priority. He has left different jobs, family and even a home to become an artist. Even though he’s currently one of the homeless artists at the Stewpot in Dallas, he said homelessness is just a temporary – but necessary – part of his journey.

In 2011, Fuller was sitting outside a homeless shelter in downtown Dallas, sketching on the back of an application form – when a man suggested he take his talents just up the road to the Stewpot. There, Fuller met Cynthia Brannum, who heads the homeless ministry’s art program.

“I whipped together a painting in a day,” Fuller said. “And she said, ‘well, this is really good. We’ve got a silent auction coming up, let me sell this for you.’”

Fuller politely declined because he didn’t feel comfortable showing a piece he had thrown together last minute. But Brannum changed his mind.

“She took it to the auction, and she said they got into a bidding war,” Fuller said. “I ended up getting almost $700 for a watercolor painting I didn’t even want anybody to see – and that kept me here.”

The Stewpot Art Program is open specifically to the homeless and at-risk populations in Dallas. It provides classes, studio space and supplies for free – a needed respite for those who feel bogged down by the stress of being homeless.

“It gets them into a place where they are creating what they want to see, and it gives them the freedom to create because that’s one of things they don’t feel very much at all – is freedom,” Cynthia Brannum said.

Since that day sketching alone on the street, Fuller’s paintings have filled the halls of the Stewpot’s second floor. His work is reminiscent of Jackson Pollock and his methodical randomness – but also Monet with his rapid and fragmented brush strokes. If you ask Fuller, though, he’ll tell you that his real muse is Harley Brown, a Canadian painter, best-known throughout the 60s and 70s for his portraits of Native Americans.

“When he teaches his students, the first thing he does is tell them to pick a color, any color blindly, and make a mark. OK, you’ve already made a mistake. Everything you do from now on will be better,” Fuller said. “And that’s pretty much what I do – just drop some paint on the canvas, and just start building on it.”

Fuller primarily works with a palette knife to etch globs of acrylic paint down and across a canvas. That technique produces several square-like strokes plotted as a landscape, a cityscape or just a random tableau of light and color.

His work is pretty popular too. He said he usually sells at least one painting at local art shows, but this past December, Fuller sold a record 14 paintings at the Stewpot art show at the Dallas Public Library.

“He’s really gotten into a wonderful place with his work, and he’s put a lot of the hard labor into it, and now he’s gotten to the point where he’s hitting his stride,” Cynthia Brannum said.

Fuller took a few art classes in college; the rest was self-taught – observing artists on YouTube, television and in galleries. But the artist has been in him since childhood.

“You know, you’d spill and then you’d try to rearrange your spill into something that looks nice,” he said. “The colors of ketchup and mustard were so much fun to me, decorating my hot dog. When I finally got to preschool, I wanted to finger paint all day.”

Being a professional painter wasn’t always in the cards, though. He originally went to the University of Colorado Boulder to play football, dropped out after two years and spent the next three and a half in the Navy. Since he’s been in Dallas, he’s bounced back and forth between several odd jobs – in hotel room service, at a convention center, even replacing rail lines for DART.

“I quit a job that everyone said I should’ve loved,” Fuller said. “I can float around wasting time taking this job and that job, but the hours I spent there, I really wanted to be painting.”

He’s in his fifties, and left his longtime home in Denver for Dallas six years ago, hoping to start fresh, pursue a career in art and ease his debt. It hasn’t exactly worked out the way he had hoped; he now lives at the Austin Street homeless shelter – but he acknowledged that he would’ve never been painting like this anywhere else.

“Homeless is not who I am; it’s just something that’s happening to me right now,” he said.

Fuller said he knows there are more practical ways to work toward his goal: get into permanent housing, get a job, paint on the side and save up enough money to paint full-time. He said he has plenty of detractors who criticize him for his priorities, but he also has plenty of fans. And instability is just a price he has to pay.

He knows it’s cliché, but he hopes the suffering and the homelessness will make him a better artist one day – and teach him valuable lessons on how to live, how to be a better person and how to evolve.

What is your ultimate goal as an artist?

First off, to be self-sustaining. I want to be able to make a living. I can also see myself wanting to travel. I want to be able to see all those places that artists go: New Orleans, Paris, and Rome. I want to see the places in Venice where the painters hang out. But mostly, what I want to be able to do is be around a group of artists and share ideas. I want to meet interesting people, with whom you can sit down and have a great conversation, or you can just listen to for two hours and it’d be the most enjoyable thing that happened to you all day.

Do you listen to music while you paint?

Yes, I listen to everything – and it all feels different. If I had my way, it would probably be old-school hip hop. There would probably be some Wu-Tang Clan. Everything gets you in the mood. I paint differently with hip hop than with classical. I paint differently with today’s hip hop than I do with old-school hip hop. With West Coast hip hop, I tend to do “ghetto” people studies – the guy hanging out on the corner with the cigarette in his mouth; he’s almost silhouetted. With East Coast hip hop, it would probably be dancers in the street, city lights, that cool car. A lot of things make the difference. With classical, I paint nature, bouncing nature. It’s usually a very loose landscape. It’s something free-flowing, and the details come in when there’s a solo. When there’s a violin solo, I all of a sudden want to pick at something. I do the same thing with jazz. The instrumentals will go on and on, and I’m doing broad strokes – and a saxophone solo will come in and I find myself picking at a certain spot and the details come in.

How has being homeless shaped you and your art?

I always see it as a temporary thing. I see a lot of people who become homeless and the hardest thing in the world is walking into a shelter. It either inspires them to work harder or toughen up, or they break. For me, I see it as a new experience. What I’m doing right now would’ve been a shock to me 10 years ago, and what I’ll be doing 10 years from now, I can’t even imagine today. Learn something today and trudge ahead tomorrow. The one thing I remember about seeds is the first thing you put them in is dirt, and they have to toughen up, break that shell and struggle to make it to the sunlight. Even once they’ve broken through the soil and they rise into the sky, there are still things they have to go through to make them stronger and survive. I’m willing to do that.

What makes you unique?

You’ve said you’ve gotten criticism for putting your art before housing. How do you respond?

Some are all-out whimsical on one side, and some are just staunch in their practicality on the other side. It’s what they believe, and when they approach me and speak their minds, I have to accept it because from their life experiences, it’s what they really believe. Unless I’ve got something that I can replace that opinion with, there’s really no sense in me really trying. It’s just taking something away from them without something to fill that vacuum. It sounds so ugly to say, but I don’t care. Everybody’s going to have something to say. I’m going to have as many detractors as I do fans, and the detractors are equally as much an inspiration as the fans because when they say you can’t, it’s usually when I try my hardest to do.