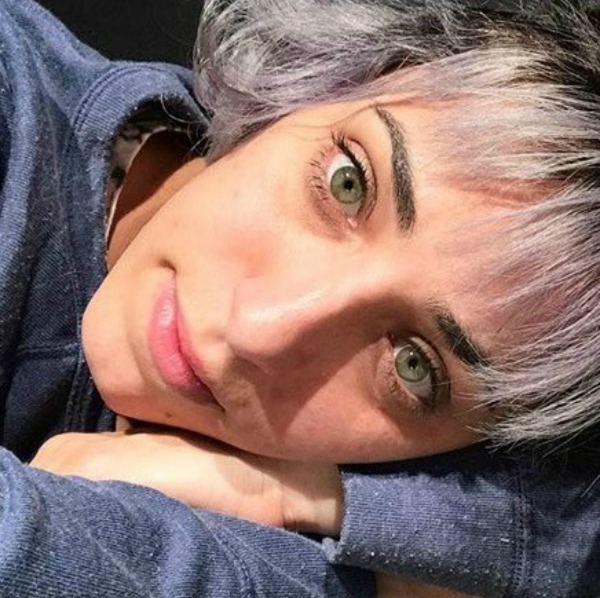 Danielle Georgiou is an educator, choreographer, dancer, and writer based in Dallas. She's the Program Coordinator for dance at Eastfield College, where she often gives students their first introduction to dance. Georgiou created Danielle Georgiou Dance Group in 2011. The company's performed throughout Texas, and in California, Oklahoma, and Oregon. It's been voted Best Dance Company by D Magazine and Dallas Observer. DGDG is known for bold and often provocative work about feminism, gender, sexuality and culture.

The 116-seat theater inside the Bath House Cultural Center in Dallas was in the process of being transformed on the Tuesday evening that I caught up with the Danielle Georgiou Dance Group. They were preparing for the premiere of a new work called “War Flower.”

The usually dark black box theater was flooded with lights and the floors, walls and ceilings were all being turned into scenery  for the upcoming performance. The group’s conceptual artist and co-producer Justin Locklear and others were laying out AstroTurf on one part of the stage and mirrored wall paper on another. Danielle Georgiou, the group’s choreographer and artistic director, paced around the space and watched them work. Then she looked at her phone to check the time and asked if they’d be done before practice. Locklear told her they would be and she announced, “We’ve got four minutes.”

Georgiou then began fluttering like a bee, moving from one group of dancers to another. She watched them perform moves, adjusted arms and legs and sometimes simply greeted them. She was very busy and a little bit nervous.

“So there are lots of challenges when you are getting ready for a show,” said Georgiou. “Especially when you’re producing an original work. I don’t have – I mean I have a script that I wrote and that we’re following, but it’s not like a published play in which all of the answers are in the text.”

This work is especially challenging, because “War Flower” tackles complex topics. Loosely, it’s about how a constant flow of information makes communication difficult. Georgiou wrote much of the work during the presidential primaries, and was thinking about social media and fake news and their effects on politics.

“People were getting their information from a variety of places and it just didn’t seem like we were actually listening to another. We were just all yelling,” said Georgiou.

The topics Georgiou examines in her work aren’t the only complex concepts she’s juggling. Her productions are pretty complex too, because they use elements you might not expect. For example, “War Flower” begins with a video fast-forwarding through rehearsal footage. There are also clips from childhood cartoons and videos of bees. Not to mention, the work has an original score that is performed by a musician wearing a glowing beekeeper suit and playing a vibraphone. Drones fly overhead. Oh! And that’s not counting the 17 dancers, who perform dialogue.

“This show starts with like, SO MANY WORDS. Like maybe for some people they’ll say too many words for a dance show,” said Georgiou.

But all of that talking is important, because it reflects our reality.

“Right now, we live in a world that’s full of media,” said Georgiou. “Words, words, words. That’s all we have all day long.”

From the moment we wake up, we’re connected via Facebook, Reddit and a million other platforms. Social media and smartphones are part of our new rituals and that has changed us, for good and bad.

“I love social media. I love it. I love it. I think it’s wonderful. It might be our next greatest contribution as humans, because we feel really connected to each other and to people we’ve never met,” said Georgiou.

And of course, social media is one factor that made the recent election so divisive.

If it all sound unconventional, that’s because it is. But that’s what Georgiou’s known for.

“I look at my works as a cathartic experience. So I am living them 100 percent,” said  Georgiou. “Whatever the characters we’ve created are going through, I’m going through. And so a little bit of me dies at the end of the show.”

“What I kind of came to was that I’m really looking at rituals. And how we as humans haven’t really changed. We’ve industrialized. We have different ways of communicating, but if you really boil it down to our core we haven’t changed,” said Georgiou.

What she means is that we’ve always used our bodies to communicate.

“Dance was our first way to communicate with each other,” said Georgiou. “We didn’t have a shared language, but we did have physical bodies that could move in a certain way to tell you ‘winter’s coming’ or ‘this is where the animal herd has gone.’”

Georgiou is excited to be creating challenging work in North Texas.

“Dallas has the room for new work. It’s ready for new work and it wants to see it. It wants to see something that it’s never seen before, which I think is really exciting for an artist like myself who’s working in a medium that isn’t seen a lot in Texas,” says Georgiou.

And it’s just as exciting for North Texas.

I grew up in Dallas and this is my home. I was born here. I was raised here. I went to school here. I work here. So being in Dallas and part of the North Texas community is super important to all of my work. I am personally super committed to creating work that gives back to my community. And I think it’s really important to be producing work in Dallas, because this city is ready to explode. Not only the dance community though, it’s also the theater community, the visual arts and music communities. So I try to integrate all of those pieces together in every production that I put on. And honestly, I am just really excited to be part of this environment that’s just ready for the next step.

What sets Dallas apart from other cities, when it comes to art?

I’ve been really lucky because I have been able to produce my work in other cities and other states, but I keep coming back to Dallas. One reason for that is that Dallas is my home. The second is that Dallas has the room for new work. It’s ready for new work and it wants to see it. This city wants to see something that it has never seen before, which I think is really exciting for an artist like myself who is working in a medium that isn’t seen a lot in Texas and really isn’t seeing a lot in the U.S..

Dance Theater is really a difficult term to define. But that’s really the cool and exciting thing about it – there’s no definition. It’s really a new type of art form. The first appearance of it was in the 1960s and 1970s in Germany with modern dance master Pina Bausch. For Bausch Dance Theater was about human expression. Producing a work that really got to people and that could affect them personally in an emotional and physical way. She put real people on stage and put them in real situations. I have always been inspired by her and she has inspired me to tell other people’s stories and my own story through Dance Theater. So for me, Dance Theater is all about the human experience and being able to take one situation and just explore it and learn how it’s universal. I want audiences to learn how we can all find a way to approach difficult experiences from our own places. And I try not to give any solutions for problems or situations through my work, instead I just present a question or I pose a problem. Then we work it out through movement and allow for the audience to come up with their own answers.

Tell me about your newest work, “War Flower.”

“War Flower” is a really layered concept of a show. It first started to be developed when I was looking back at previous works I had created. I was trying to find a common thread, because I am currently working on my dissertation for school and I needed to know exactly what I have been making. Anyway, what I came to was that I’m really looking at rituals and how we as human haven’t really changed. We’ve industrialized. We have technology. We have different access to education. We have different way of communicating, but if you boil down to our core we haven’t changed since man became man.

And so I was really interested in looking at patterns in nature, human civilization and human evolution. What I discovered was that when you boiled it all down, that it all returned to movement. Dance and movement was our first way to communicate with one another. We didn’t have a shared language, but we did have physical bodies that could move in certain ways in order to tell you, ‘Winter is coming’ or ‘This is where the herd has gone.’ So I wanted to look at all of that through a contemporary lens. Right now, we live in a world that is full of media. Words, words words. That’s all we have all day long. We wake up and stare at our phones. We go to work and immediately get on to Facebook or Reddit and that’s how we get our news now. We don’t actually open a newspaper. We don’t talk to one another. Instead we look at our phones and we text or we post a meme and hopefully that tells everyone what they need to know. So for “War Flower” I thought what if we deconstruct all of that and really just looked at what language is, which is a series of sounds. And what if we took the sounds away? What would we have left? Our bodies. Our movement.