Climbing The Walls In Sicily 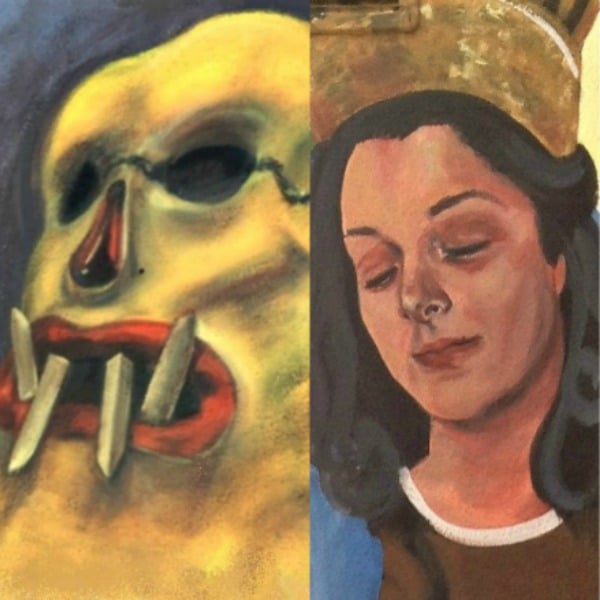 It seems like a classic case of 'coals to Newcastle' - Dallas sending painters to Italy. But in April, David Atkinson, a psychiatrist with UT-Southwestern, arranged for three area artists to fly to Prizzi, a tiny mountaintop village in Sicily. Atkinson had hatched a plan to help the economically hurting town by adding to Prizzi's old, fading stock of murals - these new murals would celebrate the town's traditions. So, with his own money, Atkinson flew Frank Campagna, Olivia Cole and Maria Haag to Prizzi.

None of them knew Italian or even what they were going to paint.

Maria Haag is painting the face of death on a wall. It’s only fitting; she could break her neck. Haag’s thirty feet off the ground. She’s on steel scaffolding next to a four-story-tall building in the Sicilian village of Prizzi. Prizzi clings to the top of a mountain, so the winds up here can whip the glasses off your face.

“Oh my goodness,” she says, “last week, it was really cold and really windy and I was painting on that top level, and it was brutal.”

The views from Prizzi are breathtaking. You can see the volcano, Mount Aetna, on the coast 125 miles away. But Sicily’s economy is hurting, and Prizzi is not on the glamorous coast, where the sunbathers and G7 summits go. It’s relatively isolated and it’s shrinking. Today, 5000 people live along its narrow, ancient streets. But the younger ones are leaving, looking for jobs.

All of which is why the 28-year-old Haag is in the air painting a mural. It celebrates the town’s famous festival, il Ballo dei Diavoli, “the Dance of the Devils,” a combination of Halloween, Easter and an all-day dance party.

Maria Haag on the scaffolding for her mural of ‘The Dance of the Devils’ (Il Ballo dei Diavoli). All photos and videos: Jerome Weeks

“It’s a beautiful town,” declares Dr. David Atkinson, “and I saw that there were some very nice murals. I just thought it’d be great if there were more.”

Atkinson is a psychiatrist with UT-Southwestern who treats teens with addiction issues. The 40-year-old Dallasite first came to Italy in college — through the University of Dallas’ Rome campus. He’s come back repeatedly, but two years ago, he fell in love with Prizzi – especially its warm-hearted residents. (A town council member jokingly notes that Atkinson has more Facebook friends from Prizzi than he does.)

So Atkinson wanted, as he says, “to be more than just a tourist.” He wanted to help the town preserve its ways, inspire people to stay. Last October, he ran into Prizzi’s mayor, Luigi Vallone, on the street. Vallone said send him a message – and that led to a meeting.

“So I pitched three ideas to him,” Atkinson says, “and this was the idea he was most interested in.”

The idea was to create more murals, murals extolling Prizzi’s traditions – religious, cultural, historical. So Atkinson rounded up Maria Haag, a friend and a painter, 25-year-old Olivia Cole, who teaches painting, and Frank Campagna, known as the Godfather of Deep Ellum for his many murals there. On his own dime, Atkinson flew all three to Prizzi.

Frank Campagna at the party celebrating all four Dallasites being named honorary or meritorious citizens of Prizzi.

It’s 11 at night in a noisy restaurant, halfway through the artists’ stay in Sicily. The first week was spent haggling with the council and with property owners over which walls and what subjects to paint. But tonight is a celebration, a celebration that started this afternoon and isn’t likely to end soon. Songs are sung, sentiments are applauded, food is consumed, English and Italian are badly attempted. All the fun was prompted by Mayor Vallone and the town council earlier proclaiming the Dallasites honorary or meritorious citizens of Prizzi. No one knows the distinction or the reason for it – or apparently cares – but the citizenship ceremony was typical, full of proud, grateful speeches and occasional chaos. People wandered in and out. The mayor’s phone went off repeatedly. The soccer team showed up.

“So it’s like this strange balance between very formal and very comical,” say Olivia Cole with a laugh.

Just another entertaining day in Prizzi. Cole says she came along on this whole painting expedition because, Hey, a free trip to Sicily is a free trip to Sicily. But day by day, the Prizzesi, as they’re called, learn about the Dallasites and their plans. And the Dallasites find themselves in a whirlwind of press conferences and welcoming parties. Even alone in a bar, if you looked like a Texan, a Sicilian gentleman might well approach and ask for the honor of buying you a beer – to join in a toast to Atkinson’s entire effort.

“David came here with these three artists, and they are doing something beautiful for this village,” says Giuseppe Raimondi, a 22-year-old student in electrical engineering. “So we love David and this project.”

Olivia Cole and her mural of Our Lady of Mount Carmel at the bus stop. The sign says: ‘Municipal of Prizzi. Travelers Waiting Room.”

Night after night, the Dallasites are overwhelmed by Sicilians inviting them into their homes, preparing hand-made pasta, locally-grown mushrooms and asparagus, and pizza – always pizza and wine.

“The whole first week was running around,” says Frank Campagna, “and ‘Let’s go party and have some wine,’ and everybody’s so wonderful, it was almost too much to handle.”

And each morning, the artists headed out – often with an espresso and a hangover – to climb ladders and haul buckets of paint. Cole painted an image of Our Lady of Mount Carmel on a bus stop. Cole herself is Catholic, and for Sicilians, it’s a favorite icon of the Virgin Mary. The mural is the smallest of the three planned images, but it’s at street level, so Cole has had plenty of bus riders and pedestrians stopping her in mid-painting to hail her Madonna and landscape (which she modeled on the hills directly across the valley from Prizzi).

“Actually, the local priest passed by,” she says with a laugh, “and saw it [the landscape] and he recognized it and he said, ‘You have to make sure you get that right!’”

Meanwhile, the 60-year-old Campagna – like Maria Haag – found himself facing a huge wall, this one on the side of the Scuola Superiore, the local high school. When Atkinson and the painters initially talked with Mayor Vallone and the town council about likely locations, the Dallasites were thinking the murals would be relatively similar to the ones already in town – maybe 10 feet by 10 feet max. It turned out Mayor Vallone had much bigger plans.

The cost wasn’t the issue. All the artists were working completely for free. It was the time frame. The scaffolding – which was donated by the local scaffolding company – had to come down soon. Everyone had committed to May 2nd as the day for the public ceremonies.

“I had two weeks, ten days, to knock it out,” explains Campagna. “So I had to figure out the technique. And make sure it worked.”

And all this, in a town, he discovered, that didn’t have a single paint can or paint roller. They had to go to Palermo to get them.

The scaffolding coming down on Frank Campagna’s mural of Giovanni Falcone and Paulo Borsellino, the two judges assassinated by the Mafia in 1992.

Early Sunday, on schedule, the scaffolding is dismantled. Both Mayor Vallone and Giuseppe Castelli, the town council chairman, show up to witness the ‘private unveiling.’ Campagna’s mural is particularly meaningful to them. It’s a giant portrait of two Palermo magistrates, Giovanni Falcone and Paulo Borsellino. Both were killed by the Mafia in 1992 with massive car bombs – in revenge for their successful prosecution of 360 Mafia members in 1986-’87. The assassinations made world-wide headlines, it made the men martyrs and inspired a fierce, anti-Mafia crusade.

So this mural is political. And educational – it’s deliberately on a school. ‘Our young people need to know who these men were, what they did,” says Castelli. And given its location, it’s a mural that can be seen for miles.

When the last steel pipe is pulled away and Campagna’s mural is in full view, Atkinson and Mayor Vallone hug. Councilman Castelli offers everyone coffee – he teaches English at the school and can open the cafeteria.

And Campagna wonders why he’d ever want to leave Sicily.