Architect Clare Floyd DeVries can blueprint a real building. But with stage sets, she can leave reality behind. 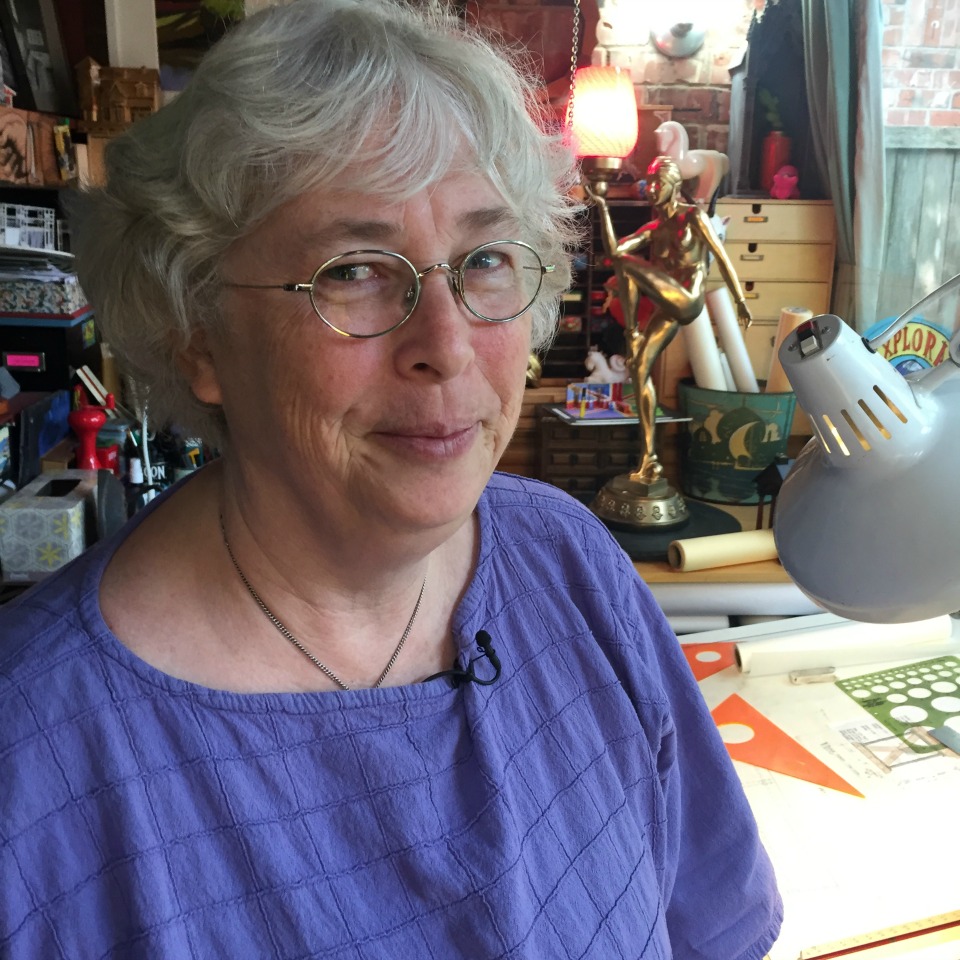 Seen any local theater lately? Odds are, you saw the art of Clare Floyd DeVries. Since 2000, she's designed more than 200 sets for area theater companies. For the first profile in our new Artist Spotlight series, DeVries explains how she ran away from architecture (more or less) and joined the backstage circus of theater carpenters and tech directors.

Welcome to the Art&Seek Artist Spotlight. Every Thursday, here and on KERA FM, we’ll explore the personal journey of a different North Texas creative.  As it grows, this site, artandseek.org/spotlight, should ultimately paint a collective portrait of our artistic community. Follow the Spotlight, enjoy and let us know what you think in the comments section below.

Clare Floyd DeVries has never taken a single class in theater. Ever. Not even ‘Intro to Acting.’ Yet she’s North Texas’ most prolific set designer. In 16 years, DeVries has designed more than 200 shows – for stage companies from Fort Worth’s Casa Mañana and the Undermain in Deep Ellum to WaterTower Theatre in Addison. She seems to be everywhere, and sometimes, repeatedly: In one season alone, DeVries designed fourteen sets. Right now, she’s designing back-to-back productions for Circle Theatre.

It helps that DeVries considers all this great fun because designing theater sets, even 14 in a year, simply doesn’t pay the bills. Very few professional set designers make a full-time living at it, even on Broadway. Most of them teach on the side or run some other, independent firm. DeVries is an architect — and officially remains one. She’s designed residences, civic buildings, restaurants and “a lot of bars,” she says proudly, “I can design you a bar.”

Through July 13th, you can see Clare Floyd DeVries’ set for Circle Theatre’s ‘Don’t Talk to the Actors.‘ Then in August, she’ll design Circle’s production of ‘The Taming,‘ loosely inspired by “The Taming of the Shrew.’

A self-described Air Force brat, DeVries credits her fascination with buildings to a childhood spent wandering cities such as Barcelona and London. DeVries and her husband, Gary — a principal at BRW Architects — met at Syracuse University where they graduated with degrees in architecture before moving to Texas.

It was being irritated by a bad stage set that got DeVries to try her hand at it — even though, as noted, she lacked any direct background in theater other than watching a lot of it. So, for her first pitch, DeVries just adapted designs from a book she found on theater.

Despite the make-do start, DeVries has gone on to win some 21 awards, including six from the Dallas-Fort Worth Theater Critics Forum. She’s worked with Uptown Players, Second Thought Theatre, Shakespeare Dallas and Stage West. She’s a company member of Kitchen Dog Theatre and the resident set designer for Circle Theatre. DeVries has designed everything from Shakespeare and Gilbert & Sullivan to ‘Urinetown’ and ‘Slaughterhouse Five.’ She’s even written a guidebook for beginning designers: ‘Alice Through the Proscenium.’ It came, she says, mostly from the notes she’s taken over the years — notes reminding her not to make that dumb mistake again.

DeVries excels at realistic sets — but often realism with a clever twist or technical challenge. The way the Circle Theatre comedy ‘Clever Little Lies,‘ for instance, made her compress several modern apartment rooms into that theater’s already compact basement space. The set acted like a pop-up book, each living room or bedroom unfolding or sliding out of the previous one. In a remarkably different fashion, she did some similar time/space-continuum-compression for Kitchen Dog’s ‘I’m Gonna Pray For You So Hard.’

Terry Martin, artistic director of WaterTower Theatre, gave DeVries her start in stage design in 2000 – and has worked with her on some seventeen shows since.

“With most designers,” Martin says “you have to feed them what you want. But Claire thinks in metaphors – like I do. We talk about what a show means. And she comes back with designs that are so well-thought-out, she brings a show to life. Especially with realistic sets.

“I remember with ‘Ravenscroft’ [a gothic comedy-thriller from 2001], Clare had a desk on the set. And she actually designed the stationery that would go on the desk.”

When did you first start calling yourself a set designer?

I called myself a set designer pretty immediately because those first two shows [at WaterTower Theatre], I was hooked. It was love at first sight, absolutely. But I’m still an architect. I’m not actually practicing very much right now. I consult with theaters when they have architectural needs. But it’s very hard currently to be a sole proprietor architect because the liability and the insurance and the limitation and the size of projects you can do as an individual, it’s kinda crazy. But I still consider myself an architect.

Do you have any work rituals? Things you do before you get started?

I guess I do have one ritual. I always start designing on yellow tracing paper because the yellow doesn’t look so blank, y’know, as white paper? White paper can be really frighteningly empty. But the yellow’s already kinda messed up.

What did you have to learn about designing sets that you didn’t already know from designing buildings?

An amazing amount. For one thing, people move through the theater space in a different way. Actors take up four times as much room as ordinary human beings in a living room. You could never put a dish of peanuts on a coffee table on stage unless those peanuts are in the script because they will be danced on, they’ll be kicked over, they’ll be in the way of the huge prop that has to come in.

And you do get to cheat and it’s a lot of fun. You get to use tape and paint. But there are some things you can’t get away with on stage. My first musical, for instance, was ‘Sweeney Todd’ at WaterTower Theatre. One of the things I didn’t know was that I had two levels, and I put the second level at the second floor because: architect. It made sense, right? What I didn’t realize was the poor actress had to run up all those stairs while singing and get to the top and still have breath to keep singing. So we revised it so that suddenly it was the shortest second level in the world, so she had to only go up five steps.

Is that why you wrote a book about set design?

I read every book I could get my hands on. And learned from them. And I actually started taking notes, most of which ended up being, ‘Don’t do this again.’

But most of the set design books out there are either textbooks and usually a bit outdated at that, so they talk about things like fabric flats that no theater I know uses. They’re almost all about how to build the set rather than how to design the set. They just don’t talk about the design process, the A to Z.

So I ended up writing a ‘how to’ book from my notes for high school students and kinda beginning designers to help them out with all the traps I fell into.