A North Texas theater veteran, Matthew Gray has run a company before. Now he's in charge of the 37-year-old Circle Theatre 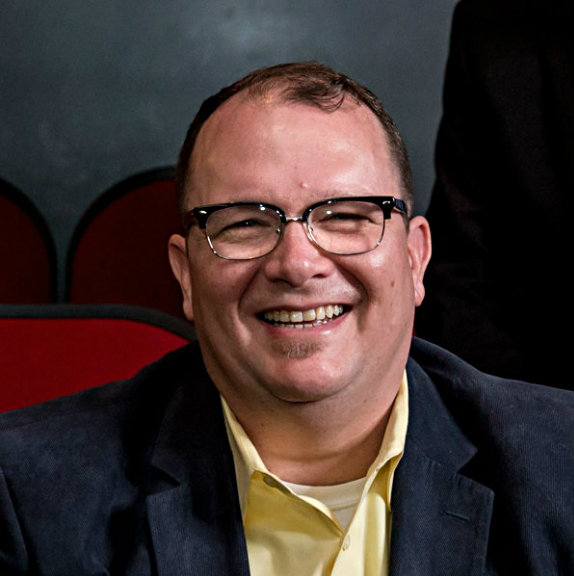 Matthew Gray is not a leading-man actor, he's an Everyman actor. He's often anchored a show - with just his presence lending a drama heft and credibility. He and his wife Emily founded the Classical Acting Company in Plano in 2002, but after that closed, Gray became an in-demand local actor and director. He even was a member of the DTC's acting company before quitting theater entirely for a job in marketing. But now Gray is running the show. He was recently appointed Circle Theatre's artistic director.

I feel the need to introduce you because you’ve been a long-time member of the North Texas theater scene, but it’s been an on-off relationship with North Texas and with theater. For college, you left here for Chicago and eventually to study theater in London. Then you moved to New York, where you had a solid career, acting off-Broadway.  But in 2002, you and your wife Emily decided to move back here to establish the Classical Acting Company.  Why?

Truth be told, you know, over the course of the five or six years that I was there, I had been, by all accounts, successful. I had worked a lot off-Broadway at the Pearl Theater Company. I had done some regional stuff. I had done the ‘Law & Order’ every actor always does and all that kind of thing.

But I suddenly realized that wasn’t what fed me as an artist, and I started to try to understand kinda what I wanted out of my career and my life. And that kind of solidified everything and my wife, Emily, was going through that same process as well. And so we decided we wanted to make our own work.

So we decided also there was a dearth of classical work going on and that’s what we really wanted to do.

And so we thought, What’s a perfect fit? Dallas.

The Classical Acting Company lasted four years, and then you went on to become a very busy local actor. You even became a member of the Dallas Theater Center’s acting company. But midway through your third season, you quit theater entirely, and you left the company. Why?

God, there’s a pattern here, isn’t there? Yeah, it was great and I loved it, and then we had a child. And not that you can’t have a child and have a career in theater, there’s plenty of  people that are doing it quite successfully.

But Henry showed up, and I thought, ‘Oh, this is is a life that I want now.’ And I think honestly, I’d convinced myself that I was done with theater. But I think that was, being the dramatic type that I am, I think I had to do that in order to justify leaving it. But after two and a half years, the itch came back.

So you worked in digital marketing and acted and directed on the side. So why, now, more than a year after Circle Theatre founder Rose Pearson died, did her husband Bill Newberry turn to you to become artistic director?

Well, what happened was, the way I understand it was, Bill was basically going to take Rose’s position and they were going to take it from there and see what happened. And Bill, I think, quickly realized he was ready to retire. Rose and Bill and I had had a conversation, jokingly, years ago, ‘Oh, you and Emily ought to come to Fort Worth and take this theater over.’ But it was a joke, and it was fun to talk about. I think there was a spark — I think Rose and I clicked in some way, and I think she saw somebody that could carry on what she wanted. That made sense, and I think Bill knew that.

Matthew Gray (right) in ‘To Kill a Mockingbird’ at the Dallas Theater Center.

Obviously, your background has been in classic theater, but Circle has been known primarily for new or new-ish plays, hardly cutting-edge but certainly contemporary. Will you change that?

Yeah, that’s a tricky question. I think that  Circle needs to grow. And I think that means a lot of things. I think there’s always room for modern classics. So some of that will creep in ultimately. But I don’t think there’ll be a wholesale change to programming.

I think the key is to make sure that the conversation is happening. And it’s very easy to underestimate your audience — not to say that that’s what Circle’s done. But I do want to give our audience the benefit of the doubt that they’re ready to be challenged — a bit. But I also want us to grow. I want us to pay our artists more. I want us to look to doing lots of co-pros —

Sorry, yes, co-production. We already co-produce once every other year with TCU, and I want to continue that, but I would also like to work with other theaters. And I would like to commission new works, and I would like — yeah, I just want ‘more.’

Will you return to acting?

I would love that, but I feel like the responsibility of shepherding the theater is  — it’s a full-time job, needless to say, and then some. But yeah, I would love to. I’m itching to direct there again, I’m anxious to do that, and that will definitely fall within the normal duties.

So I definitely wouldn’t count that out.

In some ways, Circle is handicapped by its space. It’s a small basement, not unlike the Undermain. And it has massive, concrete pillars limiting audience views. On the other hand, Circle is one of the very few theaters in North Texas that’s in the urban core. It’s downtown, you are in a pedestrian area with a fair amount of parking and you are in a popular commercial, pedestrian area. This is a great, classic theater location. But do you actually benefit from it? Do you have any real walk-up business?

Yes, we do, but we could do more. A lot more. The board has already talked to us about what we can do to increase our street presence.  Make that marquee more visible.

But it’s so interesting, I was speaking to a patron, and she said, ‘I love coming here. It’s like my own little secret.’ I love that, but at the same time, you want it to be a little more present. You want —

— you want it to be lots of people’s secret.

Exactly. And I think the sign of a really good show is you feel like they’re doing it just for you. And so that’s a great feeling, and I’m glad for her, for anyone who feels that. What I don’t want it to do is keep people from spreading the word.

When did you first consider yourself a professional? When did theater become the thing you were going to pursue as a career?

That’s really interesting. I do remember a distinct demarcation, a moment. When I was getting my undergrad in Chicago, I got cast as an understudy in my first Equity production — it was ‘Peter Pan.’ And I remember waiting for the bus with the director and finding out that his roommate was [the late actress] Glenne Headley. And I remember thinking, ‘Oh wow. I’m in the club.’ You know (laughing)? But I do remember that moment as ‘Wow. This is really what I’m going to do for a living.’

But as far as choosing it, I think it was probably sometime in high school.

What ‘feeds’ your art, as you say? What inspires your choices as an actor or director?

It’s the story, more than anything. At the risk of sounding ridiculous and overly dramatic, [legendary actress and theater teacher] Uta Hagen has this great quote,”Theater or acting is ordinary people in extraordinary circumstances.’ And I find that that inspires me the most, when it’s something that we can all lock into and understand and appreciate. But the story itself has something extraordinary about it because that only heightens the universality, the human quality.

‘Am I holding this audience in rapt silence or am I just boring the hell out of them?’

I think you can tell. Although [laughs] sometimes you’re wrong. But it’s that collective, communal energy that passes back and forth. It’s hard to define. I feel like there’s always an opportunity to connect, to communicate with your audience on a non-verbal level. I think it’s really kind of wonderful that it’s not easy to define or describe because if it were, that would diminish it in some way.

In Shakespeare’s ‘Henry IV’ at the Dallas Theater Center.

It’s that kind of tribal or, I don’t know, lizard brain experience that we have when we all communicate with each other, and it happens in the theater and that’s what makes it unique. I was talking to somebody last night about this — about how it’s hard to sell that. You can sell a piece of art by showing a picture, you can listen to music on your phone, but that collective, non-verbal, live experience in that room — it’s what makes theater different from watching a movie or television. And that’s really hard to put your finger on.

Do you have any rituals or routines you go through before you go on stage or work as a director? Other than the typical ‘An Actor Prepares.’ You know, “I try to memorize the script.”

I’m not superstitious in that way, if that’s what you mean. Routine and familiarity are probably an actor’s friend. So I do like the same routine for each production.

But one thing I have to do to memorize lines if I’m acting is I have to move. So I will often isolate myself in a room and get a ball in my hand and throw it back and forth while I walk – to memorize lines. That’s really the only thing while I’m acting. Music is a big part while I direct or design. I try to find the soundtrack in my head and surround myself with that music while  I work.

Typical. Everything’s a musical with you guys.

Interview has been edited for brevity and clarity.