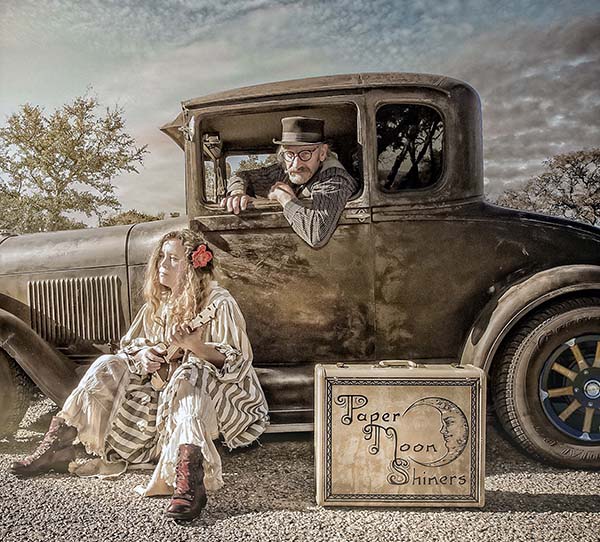 Meyer, a seasoned musical veteran (BB King, Luther Tucker, Gary Primich) met Elena, who had never sang before, at Quiet Valley Ranch, home of the Kerrville Folk Festival in 2007.  Stupefied at her lack of knowing about her own innate talent when he heard her singing along with the radio he slowly convinced her to challenge her glossophobia and to sing in public.  The ensuing result was the birth of Paper Moon Shiners in 2011.  Antinelli’s creative background in film, photography and storytelling coupled with Meyer’s constant quest for original melodies and songs brings imaginative emotive landscapes to the bands songwriting process as can be seen and heard in their latest release, “Illusions of Composure.”

The duo’s songs range in subject from the Greek lessons of King Midas to the graveness of realizing one’s mortality in “Everybody’s Leaving.” In every song the instrumentation compliments the lyrics flawlessly. Sparse, jaunty percussion using trashcans, a megaphone and a suitcase, brings vaudevillian humor to the mix. Even P.T. Barnum would have fallen for “Cap Gun Dory.” “Black Widow Spider” groans like a steam engine with a southern drawl. Paper Moon Shiners’ vintage sound and vaguely unsettling characters have the simultaneous simplicity and complexity of an Edward Gorey pen and ink drawing.