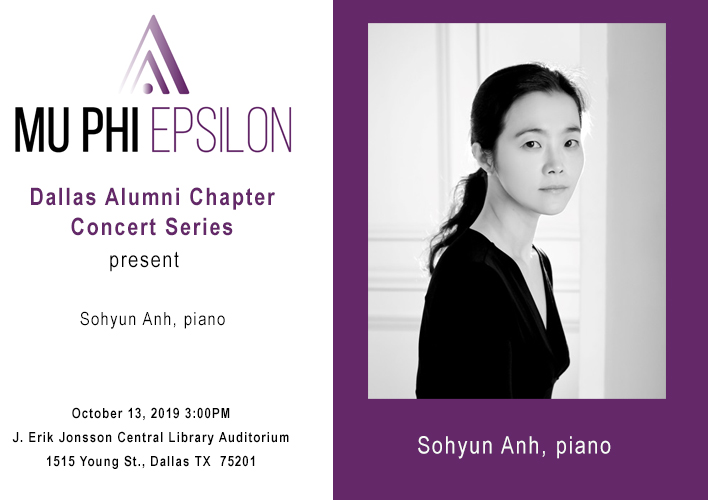 Pianist Sohyun Ahn has been described as a "dynamo… fluid and accurate… with panache and glittering clarity..." by the New Jersey Classical Society Review and her solo recital at Seoul Arts Center was named the Best Concert of the Year by South Korea’s leading classical music journal, Eumak-Chunchu.

With a solo and concerto repertoire that ranges from J.S. Bach to John Musto, she has performed in prestigious concert halls and festivals in more than a dozen countries in North America, Europe, and Asia.

Her New York performances include Carnegie Hall, Alice Tully Hall, Merkin Hall, Steinway Hall, Trinity Church, Riverside Church, among many others, and she was a guest soloist at the concert honoring the 250th anniversary of Mozart’s birth at the Sejong Art Center in Seoul, Korea. Hearing one of her performances, Roger Malouf, assistant conductor at the Metropolitan Opera, characterized it as "technically immaculate and of the highest musical quality".

Sohyun received her Doctoral of Musical Arts Degree from Rutgers, the State University of New Jersey, Professional Studies Degree at Manhattan School of Music, Masters Degrees with distinction from the Royal Scottish Conservatory and Tokyo Geidai Academy, and Bachelor's Degree from Yonsei University in Korea.

In 2017-2018 season, Sohyun will be at Carnegie’s Weill Recital Hall in New York City and Chicago Myra Hess Concert Series as a soloist.