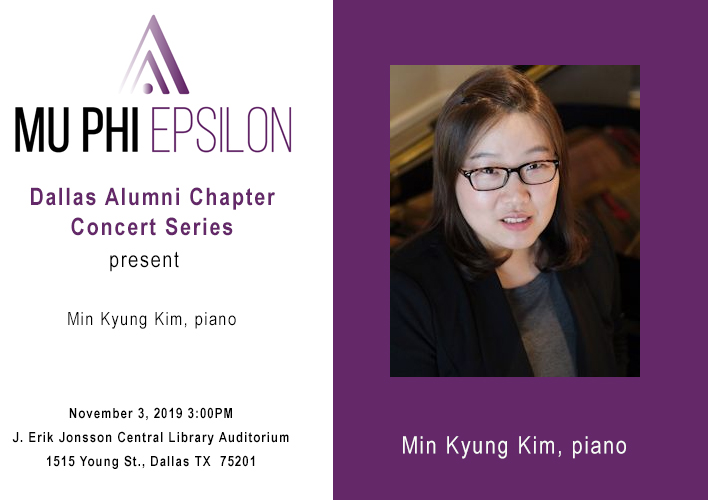 Korean Pianist Min Kyung Kim serves on piano faculty at Grayson College and doctoral candidate in Piano Performance and Music & Medicine under Joseph Banowetz and Dr. Kris Chesky at the University of North Texas. She completed her bachelor degree in Piano Performance at the Myongji University in South Korea and Master’s degree in Piano Performance with Joseph Banowetz at UNT. As a pianist, she was recently awarded as a first-prize winner at the 2018 Golden Classical Music Awards International Music Competition and first prize winner at the 2019 IMC International Piano and String Competition. She performed in Carnegie Hall’s Weill Recital Hall in 2018 and 2019. Ms. Kim and her colleague, Jake Moon has premiered and recorded a Complete Music for Piano Duo and Duet, Volume two of Dmitry Shostakovich for Toccata Classics in London in 2016. Praised by critics as “skillful reading and energized performances… clean articulation … they’re terrific together”, they were described as being “powerful advocates of the music and clearly had a ball…” by MusicWeb International. She is a Toccata Classics Artist.

Ms. Kim has also appeared in performances in the International Keyboard Institute & Festival in New York, United States International Duo Piano Competition in Colorado, and the 250th Anniversary of Mozart in Korea and numerous solo recitals and chamber recitals. She has been the recipient of numerous awards and prizes in Korea and the United States including those held by Music Education News Competition, the Korea Philharmonic Orchestra Competition, the Ye Won University Competition, Bradshaw & Buono International Piano Competition. She was recognized as an outstanding student in piano performance while at Myongji University and received the outstanding student scholarships. Throughout her master and doctoral studies, she has been the recipient of the James T. Rhea Scholarship, College of Music/USC Scholarship, Academic Achievement Scholarships and the Raupe Grant. Ms. Kim’s fascination with performing health issues has led her to explore relationships between musicians and their health problems. As a researcher, she is a current student researcher at the Texas Center for Performing Arts Health with Dr. Chesky. She presented a paper on memorizing problems and performance anxiety among pianists at the 2014 Performing Arts Medicine Association in Aspen, Colorado and the 2016 Federation of North Texas Area Universities.