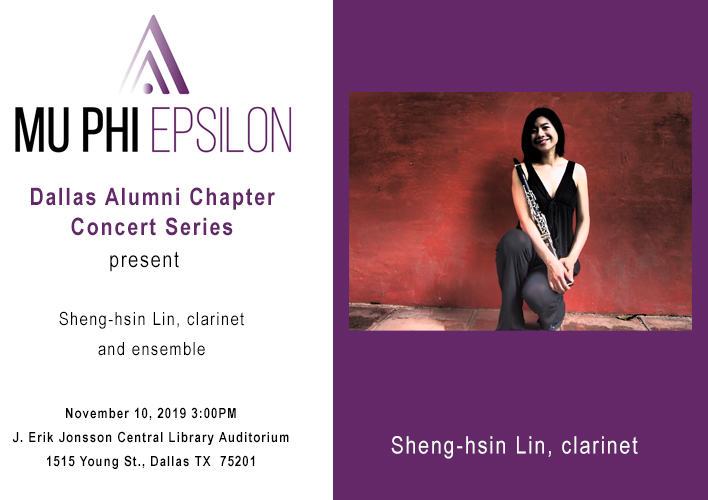 Born in Tainan, Taiwan, Sheng-hsin Lin is currently a doctoral candidate in clarinet performance at the University of North Texas (UNT) under the tutelage of Professor John Scott. She has served as the assistant principal clarinet of both the Tainan and Chi-Mei Symphony Orchestras in Taiwan. She holds a Bachelor of Fine Arts from National Kaohsiung Normal University in Taiwan and a Master of Music in clarinet performance from Indiana University at Bloomington where she studied with James Campbell. From 2010 to 2013, she was a Teaching Fellow at the UNT College of Music.

Ms. Lin is an active performer and participates in various ensembles and performances. Some of her appearances include a clarinet and guitar duo recital at La Casa de la Cultura Azcapotzalco, a lecture recital presenting Taiwanese folk music at El Colegio Azcapotzalco in Mexico City, and Trio Indiana Concert (IU Faculty Chamber Concert/Bernard Portnoy Memorial Concert). In addition to traditional clarinet repertoire, Ms. Lin enjoys contemporary works and has premiered many Taiwanese compositions. Important performances include Dr. Sansan Chien’s Dolly's Family for solo clarinet at the International Conference on Musical Arts and Pedagogy, Dr. Chien’s Overture to Medusa as the clarinet soloist with the NKNU Music Department Orchestra, and Tsen-Ling Lin’s The Memory of Clarinet, Interactive Music for Clarinet and Computer. At UNT, she has performed with the Center for Chamber Music’s Graduate Woodwind Quintet, the Symphony Orchestra, the Wind Ensemble, NOVA (New Music Ensemble), and has participated in CEMI (Center for Experimental Music & Intermedia) Concerts.

Ms. Lin has participated in a series of GIA recording projects and has performed at the national conferences of symphonic bands and ensembles such as WASBE (World Association for Symphonic Bands and Ensembles) and CBDNA (College Band Directors National Association) under the baton of Eugene Corporon with the UNT Wind Symphony. Lin seeks to use her clarinet as a method to build friendships between people from different cultures and origins.

Bah Humbug! No Nutcracker This Year