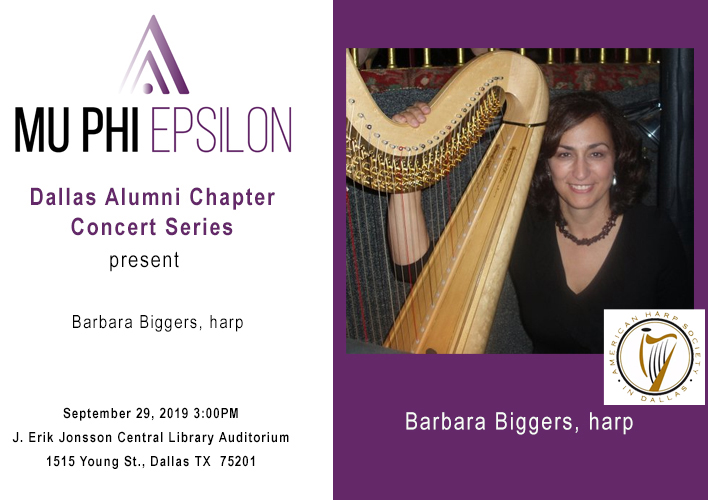 Mu Phi Epsilon Dallas Alumni Chapter presents in conjunction with the Dallas Harp Society - Barbara Biggers, harp in concert on September 29, 2019 at the J. Erik Jonsson Central Library First Floor Auditorium in Dallas TX at 3:00PM.
Barbara Biggers has been described by reviewers as one who "plays with beauty and nuance." She has lived in Dallas, Texas for the past seven years and has performed with the Dallas Symphony, Dallas Opera, Fort Worth Symphony, Dallas Chamber Symphony and Oklahoma City Philharmonic as well as many free lance groups in the area. Previously she was an active freelancer in the New York area.
Ms. Biggers performed regularly with the New Jersey Symphony, and was principal harp with the Westfield Symphony. She also worked with the New Jersey Opera Theater, Princeton Symphony, New York City Opera as well as many other symphonic groups in the New York area. In addition, she has performed for the Tony Awards at Radio City Music Hall.
As soloist, she has appeared with the Lake Placid Sinfonietta, Marble Collegiate Concert Series, Monmouth Symphony, Newtown Chamber Symphony, and American Harp Society and has performed at Merkin Concert Hall in recital. Her multi-faceted career has included performing with headliners as diverse as Placido Domingo, Andrea Bocelli, Jean-Pierre Rampal, The Irish Tenors, Diana Ross, Johnny Mathis and many more. She has performed on "The Today Show" and also has done a national television commercial.
Ms. Biggers was principal harp with the Broadway musicals Follies, Ragtime and Nine. She has also performed with the Broadway productions of Phantom of the Opera, South Pacific, The Producers, Light in the Piazza, Beauty and the Beast, The Pirate Queen, 42nd Street, Wicked, Hello Dolly and Carousel. Her recordings include a solo CD, Nocturne, Britten’s A Ceremony of Carols with the American Boy Choir, the cast albums of Nine and Follies and Fantasy Sonata by Sir Arnold Bax with violist Brett Deubner.
Ms. Biggers also maintains a large private teaching studio, and has done numerous master classes for the American Harp Society. She began her harp studies with her mother, Jeanne Fintz Goldstein and then proceeded to the Cleveland Institute of Music where she studied with Alice Chalifoux.
We Look to see you there!