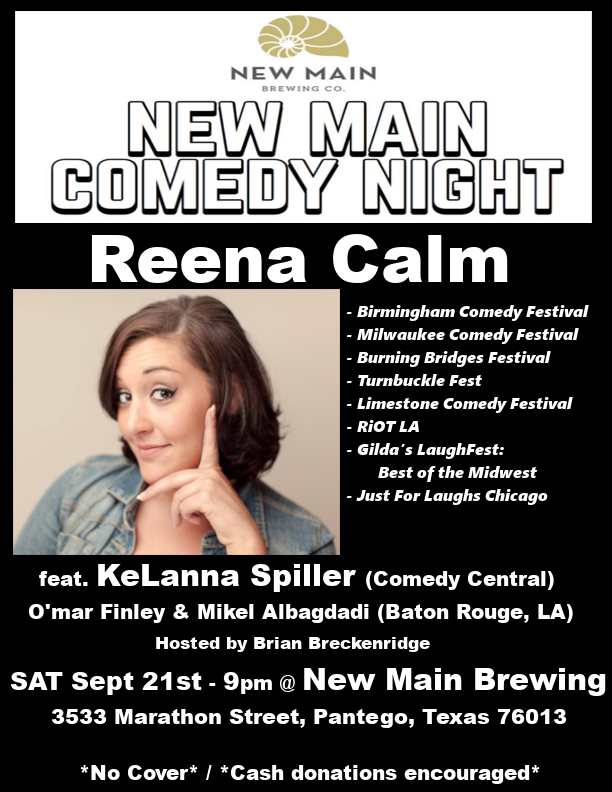 Reena Calm is an East Coast Jew turned Chicago favorite, became one of the most respected and requested comedians in the Midwest, and is now a nationally touring headliner. Pulling from a lifetime of questionable choices, Reena’s material is autobiographical, silly, and charmingly inappropriate. Living out of a tricked out Prius this pun-slinger travels the country on her signature #Calmedy tours. She's on a mission to make people gasp, groan, and giggle in all 50 States. So far she's performed in 44, and only been arrested in one. Reena's delighted crowds and critics at Accidental Comedy Festival, Limestone Comedy Festival, RiOT LA, Gilda’s LaughFest, Just For Laughs Chicago, and is a featured regular at the Laugh Factory. She's opened for legends like Arsenio Hall, Laurie Kilmartin, and Eddie Pepitone to name a few. Reena has been a frequent guest on WGN Radio, was on the Doug Loves Movies podcast, and was named Comic of The Week on The Jackie & Laurie Show. Check out her book “Once A Pun A Time…Legend of a Sighs Queen” on Amazon: http://a.co/cAZpbVm. Reena’s been called "freakin hot!" by a drunk guy in Wisconsin, “also terrific” by the Chicago Tribune, and “NOT a disappointment” by her mother. She hopes to do a show in your town soon, and would love to sleep in your finest parking lot.

Show starts at 9pm. No cover.
We will take up cash donations for the comedians at the end of the show.