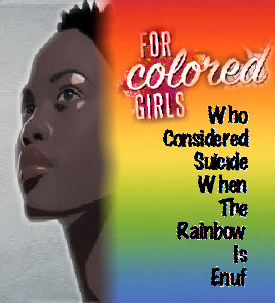 For Colored Girls Who Considered Suicide When the Rainbow is Enuf

Based on Ntozake Shange's award-winning 1975 play, which consists of a series of poems performed through a cast of nameless women, known only by a color. It deals with such subjects as love, abandonment, rape, and abortion. It later morphed into an Emmy Award-nominated television special and is still being performed around the world.