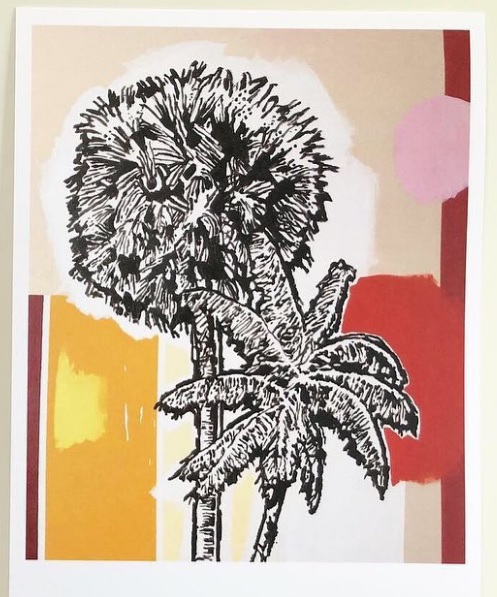 Barry Whistler Gallery is pleased to present Michael Miller’s seventh solo exhibition at the gallery. Miller passed away in 2016. The opening reception for Always: The Large Canvases will take place on Saturday, September 14th from 6-8pm. Exhibition on display through October 12.

Michael Miller taught for 25 years at Texas A&M University — Commerce. Miller’s bold narrative canvases and works on paper incorporated found materials, text, and appropriated imagery. These aspects of his work profoundly influenced his former student, Doyle Hancock; who received his BFA from A&M Commerce. Four of the canvases included in the show dating from 2000 to 2001 are among the largest works Miller completed. They’re less layered, resulting in an almost “bare” quality with large spaces of raw canvas showing beneath the paint, and still, they make use of the iconic imagery identified with Miller.

In preparation for his works on paper and canvas from 2007-2010, Miller had his studio assistants collect fabric from WalMart clearance bins and spread the mix-matched fabric over his chosen platform. He then tackled the works individually while still considering the neighboring pieces and the interaction between them as a whole, often thinking of how they will cooperate with one another.

Miller’s work was often deduced from memories; snapshot like views of tucked away visuals such as a passing truck, parking lots, or billboards. He was energized by visual havens like WalMart and the quintessential imagery that became associated with them. Miller’s professors such as Jürgen Partenheimer and Bob Arneson, the larger art community, and artists such as Sigmar Polk, heavily impacted his work.

He claimed to have been a “terrible” photographer and relied on memories as sources for his paintings and works on paper. “One blooms where one is planted, and in the mash-up of cultural mores and imagery, in the detritus of a tacky, disposable world, beauty can be discovered and created.”

Miller received his BFA from Texas State University-San Marcos in 1984 and his MFA from University of California, Davis, in 1986.