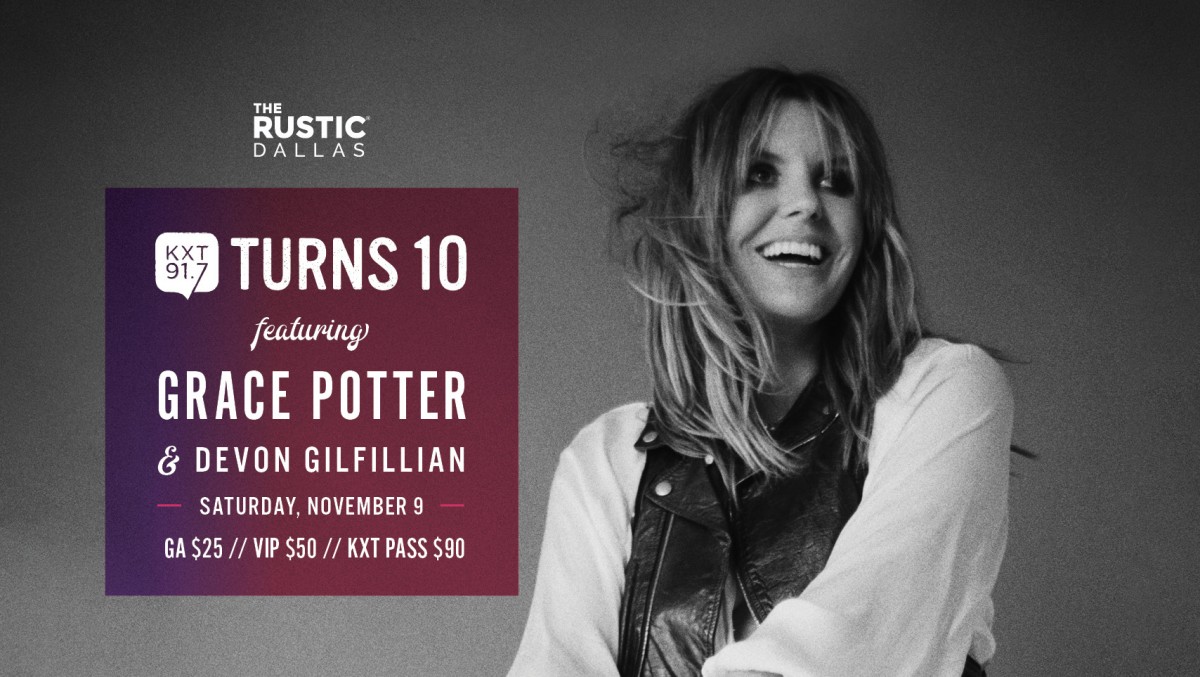 KXT 91.7 FM is celebrating 10 years of broadcast — and you're invited! Join KXT at The Rustic on Saturday, November 9 for a celebratory birthday concert featuring Grace Potter and Devon Gilfillian. Tickets go on sale Friday, August 23 at 10 am. More info at kxt.org.

KXT 91.7 FM is marking its tenth year of broadcasting the best in new, local and legendary music in North Texas and beyond. To celebrate this milestone, the station will host a series of initiatives that exemplify KXT’s commitment to supporting a thriving music community in North Texas — including the release of a KXT Live Sessions album, a local artist video contest and a celebratory birthday concert featuring Grace Potter and Devon Gilfillian at The Rustic in Dallas on November 9, 2019.

KXT launched on November 9, 2009 as a Triple-A (Adult Album Alternative) station, as part of North Texas Public Broadcasting — a not-for-profit media network that also includes KERA 90.1 FM, KERA TV and Art&Seek. Since its inception, KXT’s mission has been to bolster North Texas’ music community through the support of emerging talent, unique live music performances and local musicians. Now, in its tenth year, KXT has become one of the top-5 most-listened-to Triple-A public radio stations in the country. Since 2009, KXT has produced over 375 KXT Live Sessions and On the Road Sessions, featuring intimate performances from new and established artists. Notable veterans of these series include Brandi Carlile, Chrissie Hynde, Courtney Barnett, Leon Bridges, Lucinda Williams, Maggie Rogers, Old 97’s, Violent Femmes and more.

As KXT celebrates its 10th year, such performances will be commemorated with the release of a KXT Live Sessions Album on vinyl and CD that include select studio performances from the past 10 years. On November 9, 2019, listeners and members alike are invited to join the station for KXT Turns 10 — a celebratory birthday concert featuring acclaimed singer-songwriter Grace Potter at The Rustic in Dallas, with opening support from soul and R&B artist Devon Gilfillian. An additional opening set will be selected through a local artist video competition — the KXT Tiny Cake Contest. Modeled after NPR’s Tiny Desk Contest, North Texas-based musicians will have the opportunity to submit a video of their work to compete for the chance to perform an opening set at the KXT Turns 10 concert, and record an On the Road session in the artist’s hometown. “Looking back at the past 10 years,” says KXT Program Director Amy Miller, “we wanted to create an event that represents what the station is all about — local music, emerging artists from around the globe, and artists who have become a staple of our station and format. Grace Potter’s live show has always been impressive and Devon Gilfillian is an artist on the rise who we just discovered this year. We’re looking forward to going through submissions for our Tiny Cake Contest and picking a local artist to help us celebrate and open the show for us.”