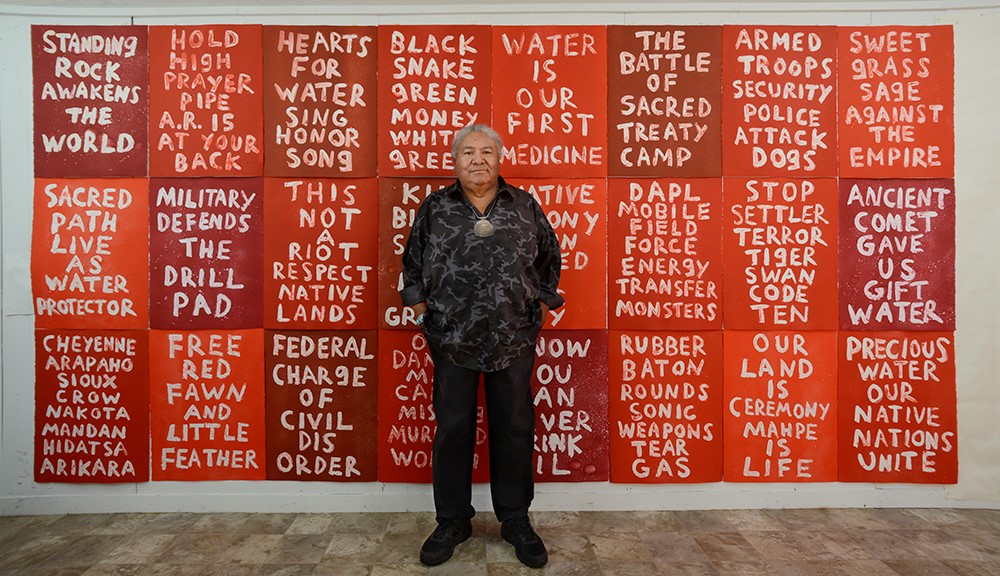 Hock E Aye Vi Edgar Heap of Birds is an artist and an advocate for indigenous communities worldwide. His text-based work includes multidisciplinary forms of public art messages, large-scale drawings, Neuf Series acrylic paintings, prints, works in glass, and monumental porcelain enamel on steel outdoor sculpture. His most recent works address injustices and current views of Native American people, illuminating the struggles within the lives of Native Americans, as well as acknowledging Native Americans’ cultural differences through coupling positive and negatives, the past and the present though language.

“I’ve been doing experimentation with solvents to alter the words, blurring the words,” Heap of Birds said. “I’m attacking the words much like in some ways the social justice in America of Native people is an onslaught. We’re being attacked with poverty, ill health, dysfunction, so I’m doing the same with the prints.” Heap of Birds states, “A lot of Native American existence is suppressed in America, so the dominant culture doesn’t tend to know much about the original people that are here so it’s like a secret.”

His work has been exhibited at some of the most renowned institutions in the world, including The Museum of Modern Art; Orchard Gallery, Northern Ireland; the Cheyenne and Arapaho Nations Reservation in Oklahoma; SITE Santa Fe Museum, New Mexico; Grand Palais in Paris, France; and Documenta, Kassel, Germany. His work holds a place in the collections of many museums, such as the Whitney Museum of American Art, New York City; Walker Art Center, Minneapolis; and the Smithsonian Institution, Washington, D.C. Most recently his work appears in the collections of The Metropolitan Museum of Art in New York City; the British Museum in London; Anchorage Museum in Alaska; and the Library of Congress in Washington, D.C.

In 2012, Heap of Birds was named a USA Ford Fellow, and in 2014 he was honored as a Distinguished Alumni from the University of Kansas. He has received grants and awards from the National Endowment for the Arts, the Andy Warhol Foundation, Bonfil Stanton Foundation, the Pew Charitable Trust, AT&T, Lila Wallace Foundation, Louis Comfort Tiffany Foundation, and the Rockefeller Foundation.