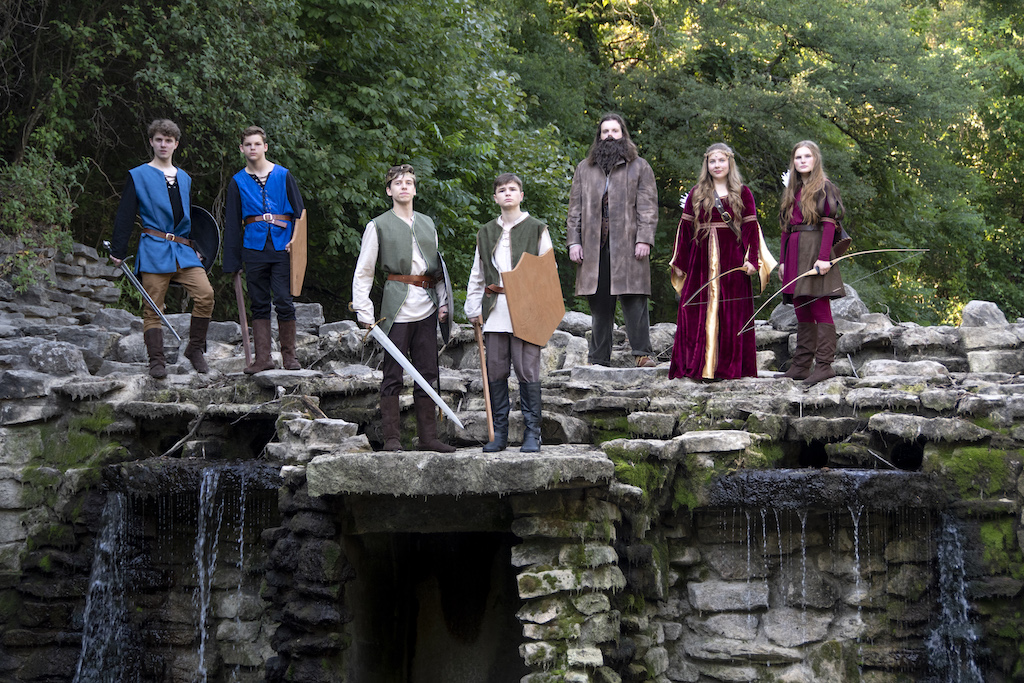 Outcry Youth Theatre’s epic telling of this brand-new adaptation of the Arthurian legend brings new life and meaning to the classic tale. The show ambitiously spans the entire life of Arthur, from a boy of eleven to an aging king, and features many unforgettable characters, from Guinevere and Lancelot to Morgan le Fay and Merlin. This incredible story has it all: action and adventure, love and romance, myth and magic. From the sword in the stone to the Knights of the Round Table, the treasured stories are there but presented with a modern twist that forgoes the pretense of olde English language or the confines of a sequentially delivered narrative. Outcry Theatre artistic director Becca Johnson-Spinos directs a cast of 39 youth actors at the Addison Theatre Centre’s Studio Theatre.

Becca and Jason Johnson-Spinos, the husband and wife creative team who run Outcry Theatre, have once again adapted an ageless story with a fresh approach that capitalizes on their troupe’s deep talent base of both middle and high school performers. The Johnson-Spinos’ past adaptations have included Alice in Wonderland and 20,000 Leagues Under the Sea. “Usually when Jason and I do an adaptation we look to literary classics but with The Legend of Arthurour source was actually an ever-evolving legend that many believe originated through word-of-mouth as far back as 500 CE,” Becca Johnson-Spinos explained. “This adaptation largely stays true to the legend, but we build our story out of order, challenging audience members to become time travelers of sorts, moving quickly between Arthur’s life as a child, man, and king.”

In this unique take on the story, Lancelot, Guinevere, and Arthur meet when they are young with a common ambition to do good in the world. Audiences see them grow up, and they see how the roles they assume – a knight, a queen, and a king – change and challenge them throughout their lives. The play uses two sets of actors to portray this famous triangle, jumping back and forth in time between the younger and older versions. The result is that Young Arthur shares the stage with King Arthur as the two versions of the character think about their future or get lost in memories of the past.

There are sword fights and there is magic, but it is the heroic character of Arthur, revealed through challenges and triumphs, that will linger with you long after Merlin has cast his last spell.

Recommended for ages 12 and up for mild language and adult themes. If parents have further questions about the content, the theatre encourages them to use their contact form on outcrytheatre.com.

Tickets are on sale now at outcrytheatre.com/arthur

$10 for General Admission; $20 For Premium Reserved

Tickets can be purchased at the door or online at this link: