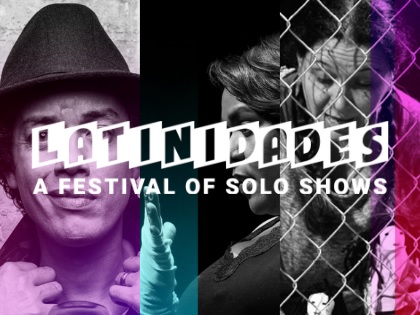 Latinidades: A Festival of Solo Shows

Latinidades: A Festival of Solo Shows - This unique festival of solo shows features performers, stories, and experiences from around the United States.

Evolution of a Sonero (August 15 - August 18, 2019)
Written and performed by Flaco Navajo
Directed by Jorge B. Merced

With unabashed love for The Bronx, a gift for crafting memorable characters, and genuine good humor, Navaja and five top-notch musicians – aka The Razor Blades – bring on the charm, the rhythm, and the soul essential to a Bronx Sonero. Paying homage to many great musical icons—from Janis Joplin to Menudo, from The Doors to Héctor Lavoe, from Jimi Hendrix to Rubén Blades—the play is as much about Navaja’s creative evolution as it is about the wild mix that gives life to a rhyme, a people and a culture. A Touring Production of Pregones/Puerto Rican Traveling Theatre Co. Please note: Recommended for ages 14 and up. Performance is in English, but some Spanish may be used.

When a health system based in capitalism meets a Queer, Chicana body, its full limitations come into sharp focus. The result is a manifesto full of clarity into the revolution that must come in order for our society to truly care for its most vulnerable. Please note: Recommended for ages 14 and up. Performance is in English.

Ursula tells the journey of Nadia, a 7-year-old, separated from her mother after seeking asylum at the US-Mexico border. As Nadia waits for her asylum to be processed, she reflects on the difficulties she is leaving behind in Honduras and the new reality she is facing. Live, original music from Armando Monsivais will take audiences into Nadia’s mind as she tries to make sense of all that is happening around her. Please note: Recommended for ages 12 and up. Performed primarily in Spanish with English subtitles.