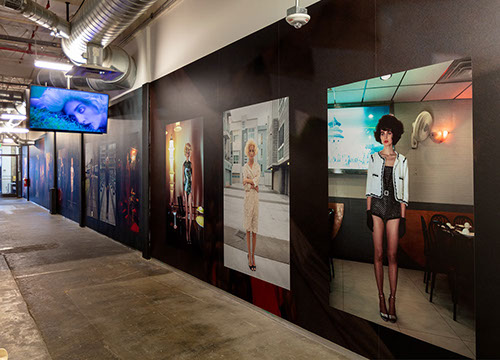 In what marks her first institutional exhibition, Ukrainian artist Yelena Yemchuk intervened in the museum’s central passageway to create a sweeping installation comprised of recent work in film and photography. Taking its title from the artist’s ongoing photo series of the same name, Mabel, Betty & Bette is an exhibition exploring the complex nature of identity, emphasizing in particular moments of change, crisis, and loss of self. Each photograph portrays one of the three fictional women—Mabel, Betty, or Bette—as conveyed by a cast member in one of three corresponding wigs playing out three different storylines written by the artist. Also on view at the center of the exhibition is a new moving image work filmed in Yemchuk’s native country in which Ukrainian artist Anna Domashyna performs as all three characters.