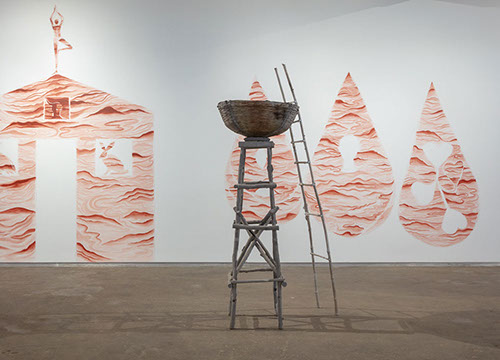 Watchtowers, Keys, Threads, Gates is a large-scale installation by Francesco Clemente consisting of a site-specific mural and two series of sculptures produced in the artist’s signature dreamlike aesthetic, and which reflect his ongoing exploration into notions of movement, transition, vulnerability, and mythological narratives. Recurring motifs of ladders, labyrinths, gates, doors, and keys, among other representative symbols, reference the condition of existing in a liminal space through which one eventually passes or remains caught in a balancing act.

Both bodies of sculpture were created over the past five years in collaboration with artisans in Jodhpur, India. This exhibition provides a rare glimpse into Clemente’s forays in sculpture, denoting one of the few occasions in which he has worked in the medium. Additionally, with the site-specific mural commissioned by Dallas Contemporary, the artist employs ‘new’ zodiac signs that he invented himself, which were drawn directly onto the wall with sepia pencils, and are intended to serve as symbols of gates. Muralist painters from Oaxaca assisted in further embellishing the design with patterns of waves, colored in an Oxblood hue traditionally used in Chinese ceramics.