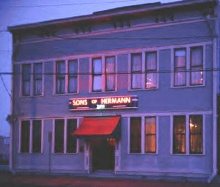 Thom Jurek at All Music said it best, "Only Gram Parsons' term "Cosmic American Music" begins to touch her mercurial, changeling roots aesthetic, . . McNally is a Zen-like, post-Beat song poet”. For those who have followed McNally’s nearly twenty year career the thing that most sticks with the listener about her, is the timeless effortlessness that she brings to all she does. With a long catalog and longer list of peers with whom she has written, recorded and toured, McNally continues to turn out great music that defies blatant genre-fication.

At home across the American (Americana) music spectrum, the Grammy nominee who’s live music career began on the jam band circuit of the 1990’s with bands like Robert Randolph and Derek Trucks, writes as well as she interprets the songs of others, has a top tier musicality to her craft, a soul stirring voice that immediately grabs one by the heart strings and a troubadour’s wanderlust, not to mention as it turns out, she is also an excellent electric guitar player.

Like her anti-hero heros J.J. Cale, Tom Waits, Bob Dylan. Dr. John, and Jim Dickinson, McNally knows who she serves. She serves the song. Her quiet but steady plodding through the many layers of the business of music, hasn’t ever been rewarded with massive fame and fortune but in time that slow burn has become the treasure in and of itself.

The part of McNally’s narrative that is often missed is that not only has she self-managed herself for nearly all of her career but that she has also been a stout warrior-like-artist who often went toe-to-toe with label heads and A&R to defend and fight for her visions. She left the major label world after ten years at Capital/EMI to fend for herself on various smaller labels and self-release paradigms. Perhaps the business of music is finally catching up with her independent spirit. We shall see.

"She has the voice: bruised, smoky and ornery, right at home where country and soul meet. She has the melodies and the timing - she’s irresistible.”
Jon Pareles, The New York Times

“She is probably rock’s most talented undiscovered gem. This woman with the confident voice, pin-point lyrics and effortless guitar playing….Shannon McNally can rock your socks off at the same time she is hitting you over the head with words that actually make sense.”
Glide Magazine

“I first heard of Shannon McNally through John Leventhal, who described her vocal skills as having just the right amount of girlish smoke. At the time I was looking for just the right singer to make a cameo appearance on a song I was recording called “Famous Last Words of a Fool.” Trusting John’s appraisal---from his description I imagined something of a cross between Joan Jett and Lauren Bacall---I set about tracking the mystery singer down. What I eventually discovered in the small town of Holly Springs, Mississippi was this dark-eyed beauty who wrote grown-up songs, played a pretty mean Fender Stratocaster and, at times, sounded a lot Jesse Mae Hemphill. From our first meeting I couldn’t shake the feeling that I was the right man for the job of shepherding the next Shannon McNally record into existence. Now that the record is made, I hope music lovers around the world will come to know what I and many others already know: This girl belongs in the Americana Music spotlight.”
Rodney Crowell

“McNally is back. Enjoy her wondrous voice and the effervescent spirt of this album. She proves to be, not surprising to those who are familiar with her catalog, a terrific interpreter in the vein of Emmylou and Linda Ronstadt.”
Jim Hynes/Elmore magazine

“Black Irish shows McNally’s range as an artist – her ability to be soulful, sultry, introspective and tough in her songwriting and singing. McNally has never sounded better.”
Maeri Ferguson/No Depression

“With any luck and the right promotion, it (Black Irish) ought to move McNally to the forefront of Americana artists, where she clearly belongs.”
Hal Horowitz/American Songwriter

“Shannon McNally has a been gifted with a voice that has an ethereal hypnotic affect featuring a mix of southern drawl and Celtic lilt delivered as a velvety alto that ensnares the soul of the listener.”
Rick Bowen/Innocent Words

“With Black Irish, Shannon McNally ascends to the highest tier of Americana auteurs and guarantees she won’t be abandoning that locale any time soon.”
Lee Zimmerman/Glide Magazine