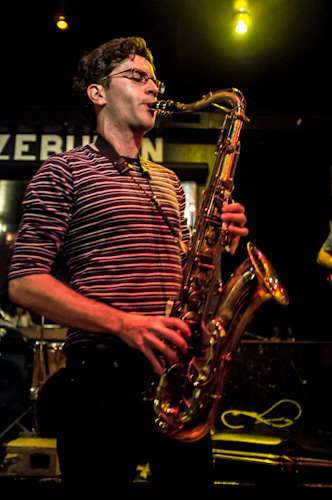 In Residence at the Nasher: February 17-22, 2020This Soundings season’s musician-in-residence is saxophonist, composer, and renaissance man, Travis Laplante, who divides his time between Brooklyn and southern Vermont. Laplante is an astonishing technician, extending possibilities of the tenor saxophone into new territories that encompass the avant-garde, contemporary jazz and classical, world music, and beyond, swirled into a transformative artistic experience. His mastery of circular breathing, multiphonics and harmonics is virtuosic, and he’s likely to produce dizzying torrents of sound—it’s music as primal therapy, musician as shaman. His six-day residency will involve a concert in Nasher Hall on February 20—the primary Soundings concert—as well as smaller performances as part of the free late-night program ‘Til Midnight at the Nasher on February 21, and for children, in the galleries, on February 22. As a Pied Piper of improv and the moment, Laplante performances could lead audiences anywhere. “There is nothing that Travis does that is not rooted in emotional psychology,” Seth Knopp maintains. “In spite of the extended techniques he uses, it is almost as though he wails beyond what is humanly or physically possible. He represents all the emotion behind the wail.”