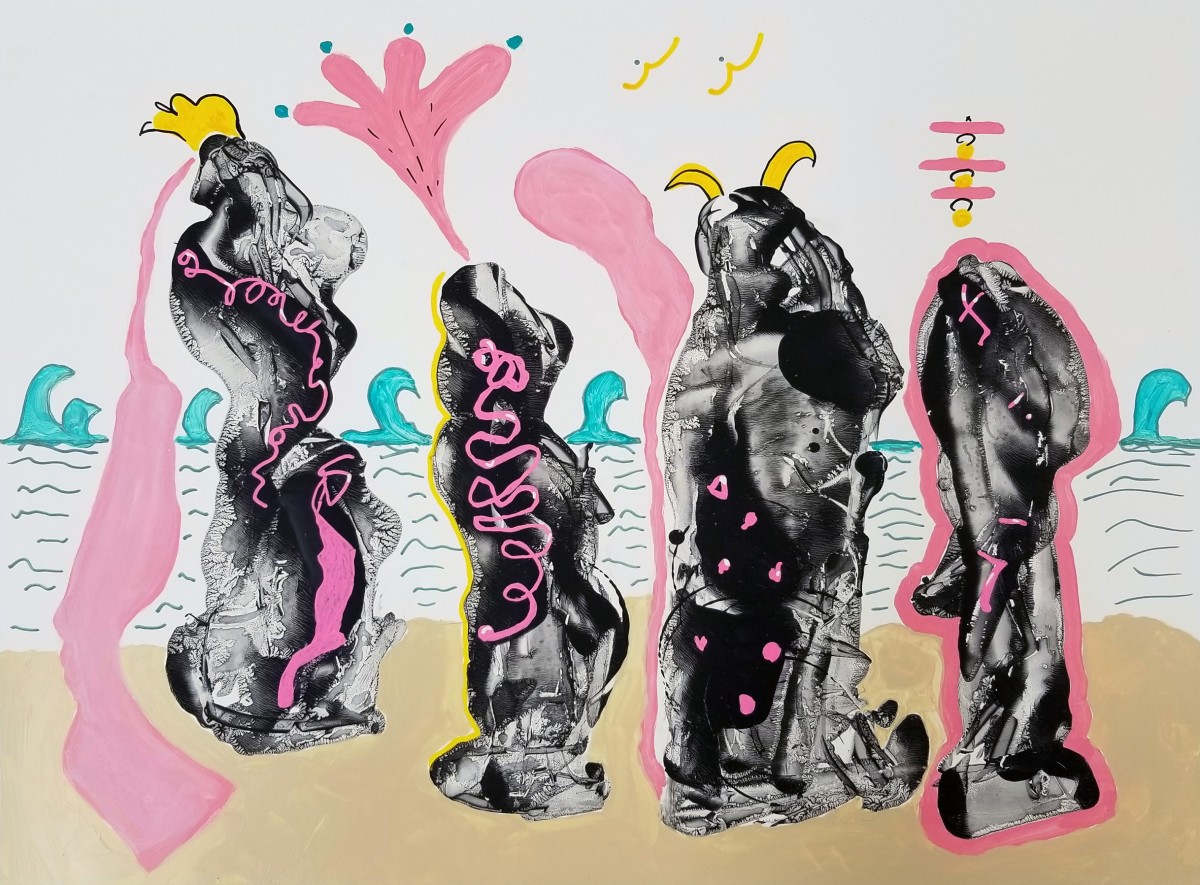 Ro2 is proud to present Seriously Silly, a solo exhibition featuring new works by artist Jeanne C. Neal. The show will run from July 6 through August 3, 2019. There will be an artist reception held on Saturday, July 13 from 7-10 PM at Ro2’s Cedars gallery located at 1501 S Ervay Street, Dallas, TX 75215.

Artist Jeanne Neal creates vibrant, high energy work conveying the synchronicity of the refined with the playful in her upcoming solo exhibition, ‘Seriously Silly’. Taking various avenues to express her concepts, Neal employs contrasting methods of both non-objective and more figurative styles to juxtapoz the serious elements to the more lighthearted devices. Dark shapes and heavy black markings forcibly press against each other while they seemingly endeavor to escape the picture plane. Engaging, and vibrant shapes deliver comparison and balance between the darker tones, diffusing tension and offering a lighter context. However, Neal does not aim to construct a perfect balance in her work, just as in life.

Your ability to find the silly in the serious will take you far.

On a “serious” note, I believe the concept in this “fortune” applies to all of us on some level. It’s so easy to allow the serious parts of life to dominate, or, conversely, I suppose, to be a little too flippant overall. It seems there should be somewhat of a balance between the silly and the serious in our lives, and by silly, I don’t mean stupid. Silly lends itself to being more light-hearted, not so worried or burdened. I think serious is self-explanatory. It just seems “serious” can be too full of itself at times, silly can temper that. These works are attempts to convey this co-existence of the silly and the serious. The works are not necessarily totally balanced, as life certainly is not. Some may be more serious, some more silly, hopefully with both ideas evident.

This concept has many pathways to artistic expression. Some, in this show, are non-objective works with contrasting juxtaposed shapes, lines, and colors. Others may be seemingly more figurative, including the sculptural works, still displaying the serious/silly essence.

A more specific description of some of the pieces might be as follows, high energy stored within a specific space (or spaces), interacting with flatter, perhaps lighter areas of color, with or without added simplistic lines and markings. These “higher energy” spaces may convey a slightly serious or impending feeling which is somewhat diffused, as well as contained, by the contrasting area(s).

These energetic or “serious” areas are expressed specifically by the use of close-knit shapes seeming to press against one another, generally dark shapes, heavy black markings, gradations of shading, and lines within the composition that seem, at times,  to want to escape the picture plane. The silly/whimsical areas are flatter, simpler and lighter-hearted by comparison, and may contain colors which seem more amusing, creating somewhat of a balance between what might be termed the silly and the serious.

A couple of the works, to me, are reminiscent of Dr. Seuss’s writings, who often walked the line between the serious and the silly.

Born and raised in Dallas, TX, I attended Texas Christian University, receiving a B.A. in Art History in 1974. I have been creating works of art and studying with Bonny Leibowitz for the past several years. I have also enjoyed and learned much from classes and consultations with Michael O’Keefe.