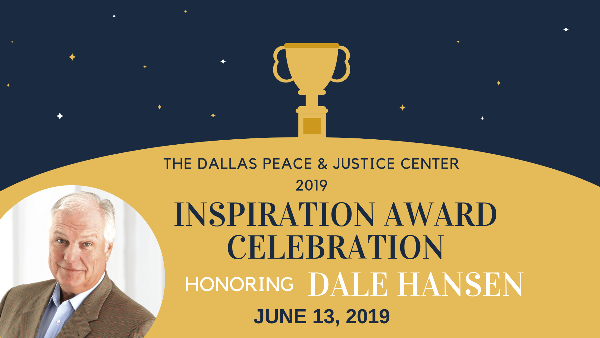 Dale Hansen was deemed “Best Journalist With A Message” in the Dallas Observer’s 2018 “Best of Dallas” poll. The New York Times refers to him as “The Progressive Voice Bursting from Texas and Spreading Everywhere” and calls him a “viral video star.”

The WFAA sports anchor is known as much for his “unplugged” commentaries on social issues as for his long, successful career in broadcasting. Over the years, he has used these segments to call out everything from bigotry and hate, to gun violence and sexual abuse, to corruption, to hypocrisy, and even to acknowledge a special bond with a beloved beagle.

“Dale Hansen is nothing less than a Texas institution,” according to Dave Lougee, president of WFAA-TV. “His excellence in reporting and straight-shooting commentaries have made indelible marks on our industry and our nation’s civic discourse.”

Come help us celebrate this iconic personality, whose courage to speak out in support of human rights, equality and dignity for all in an effort to “start the conversation” has inspired us to honor him with the DPJC’s 2019 Inspiration Award!