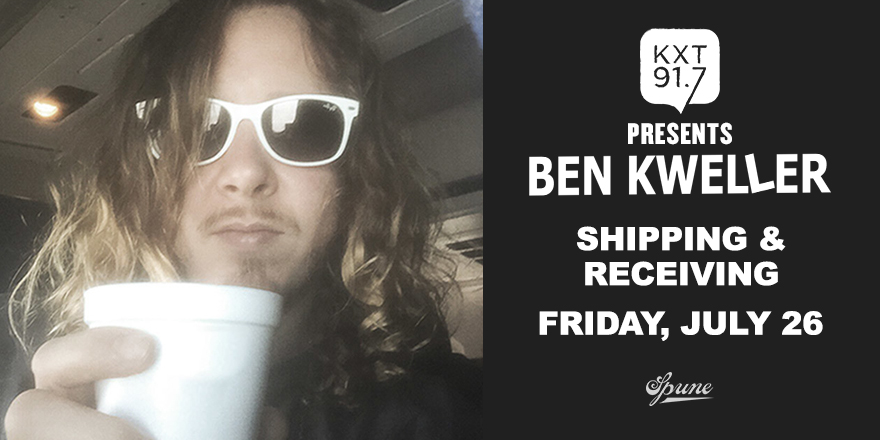 Indie icon Ben Kweller returns with some of the strongest music of his career. He didn't go away just because -- he was fifteen minutes away from death. "We almost died," Kweller says. "Me, Lizzy, our two boys... dead. We wouldn't be here if Liz hadn't woken up that night."

Kweller is referring to an ill-fated trip to the mountains of New Mexico, back in 2013. The family went on what was meant to be a winter wonderland vacation and instead suffered acute carbon monoxide poisoning.

"We were in this sweet little cabin and in the middle of the night, Lizzy woke up and said, 'Ben, get up! Something's wrong -- I feel horrible,'" Kweller says. "I immediately jumped out of bed and collapsed to the ground. We instinctively crawled to the front door and opened it. Fresh air rushed in the cabin. I called 911. We grabbed the boys out of bed, trying to shake them awake, and managed to get everyone outside in the snow. The boys were crying and falling in and out of consciousness -- it was like something out of a horror film," Kweller says. "When the ambulances arrived, they tested our blood and said our CO levels were so high, we were 15 minutes away from not waking up. Fifteen minutes! We spent the next day in the hospital on pure oxygen and days after that feeling lethargic and mush-brained. When we got back home, I was an incapacitated zombie. I told my team to cancel everything. I was done."

As the months rolled on, Kweller began to battle depression as a result of the poisoning. There was a period where the "Sundress" singer didn't think he'd ever see the stage again. "I just didn't care -- I didn't want to play music anymore," Kweller says. "I didn't want to leave my family's side, and for the first time in my life I was scared. When you almost die, everything changes, and all the unimportant sh*t disappears. Luckily, I kept writing songs and they got me through some really dark places. Eventually I had 50 ready to go but I was still reluctant to start the machine back up again. A close friend of mine called me up and said, 'Just come over and let's record something together. Even if it's just a demo, maybe it'll make you feel better.'"

That close friend was producer and songwriter, Dwight A. Baker (Misseo, Brandi Carlile). One thing led to another and the two ended up co-producing an entire album. The album is called, Circuit Boredom, and lucky for us, it will be released! The first single, "Heart Attack Kid," was released in early '19 with a music video co-directed by Superorganism's Robert Strange. The BK touring machine is also gearing back up with shows in North America, Europe, Japan, and Australia.

With a regretful sigh, Kweller shares "There were so many times over the past five years that a fan would come up to me and say, 'Dude, where have you been?' "rather than going into detail, I'd shrug it off and say, 'man, I needed a break, but I'll come back one day.' Inside, I wasn't sure, though."

A major turning point that convinced Kweller to put music back into the world, was the loss of his friend Anton Yelchin. The two had a close bond and even shared the silver screen in Rudderless, a music-based drama directed by William H. Macy. "I'm still in awe of Anton's creative output and all that he achieved in such a short period of time," Kweller says. "One of my best friends, gone in the blink of an eye -- it absolutely woke me up. I knew I had to overcome my own trauma and do what I was born to do. Plus, Anton would've thought it rude if I didn't share these songs."

All of this comes as a relief to BK fans, whom, for over 15 years, have sung along to his anthems and cried to his ballads. They know his gift for jumping through genres while remaining heartfelt and authentic. They also know that nostalgia and optimism were his trademarks long before his run-in with mortality. Now, with the forthcoming release of Circuit Boredom, we are reminded that a light really is at the end of the tunnel, we just have to listen for it. We're glad BK's back.