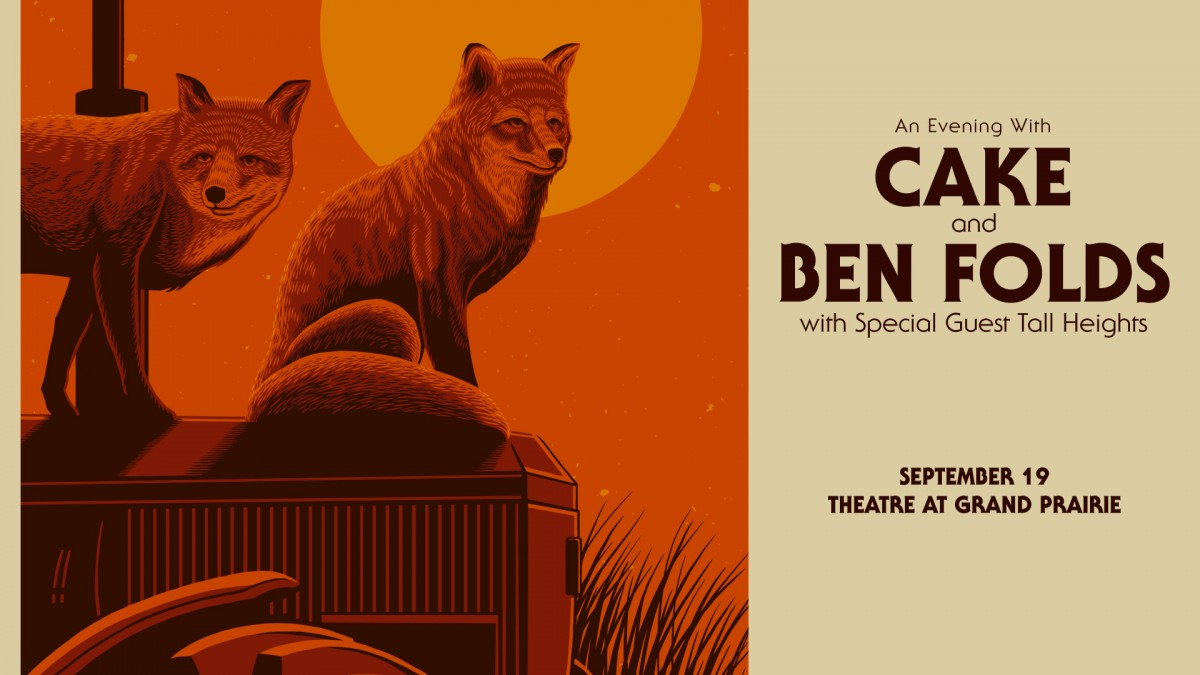 Cake and Ben Folds head to The Theatre at Grand Prairie on Thursday, September 19, 2019, with Tall Heights! Tickets go on sale Friday, April 19 at 10am CT. Doors open at 6 pm, show starts at 7 pm. This event is for all ages.

CAKE’s adherence to their original guiding principles has only grown stronger. Originally formed as a somewhat antagonistic answer to grunge, CAKE’s democratic processes, defiant self-reliance, and lucid yet ever-inventive music has made them a nation-state unto themselves, with no obvious peers, belonging to no school.  In addition to writing, arranging, producing, and performing their own music, they have taught themselves to engineer & produce their recording projects in their own solar-powered studio in Sacramento, CA — which actually generates more power than is needed to run it (causing the building’s electrical meter to run in reverse).  Additionally, CAKE’s go green advocacy will continue this summer… the band gives away a native tree at every performance (and have done so for the past 12 years). When you attend a CAKE concert, there is always a tree on stage throughout their performance, and at some point during the evening one lucky audience member (who is willing the make the commitment to be a lifelong steward for the tree) gets to take it home. The CAKE Forest can be seen here: http://www.cakemusic.com/world. CAKE’s most recent album, Showroom of Compassion, debuted at #1 on Billboard’s “Top 200” Chart and was touted for its “deadpan brilliance” by The New Yorker. The band is currently in the recording studio working on their ninth album, due for release later this year.

Ben Folds is widely regarded as one of the major music influencers of our generation. He has created an enormous body of genre-bending music that includes pop albums with Ben Folds Five, multiple solo albums, and collaborative records with artists spanning Sara Bareilles, Regina Spektor and William Shatner. Folds’ most recent work, 2015’s So There, blended original songs with his critically acclaimed “Concerto For Piano and Orchestra” and soared to #1 on Billboard’s “Classical” and “Classical Crossover” charts. For over a decade, Folds has performed with some of the world’s greatest symphony orchestras. In 2017, he was named as the first-ever Artistic Advisor to the National Symphony Orchestra at the Kennedy Center. Folds continues to perform with symphonies and also recently returned to solo touring, delivering a high-energy rock show with the intimacy of a solo piano performance.